In honor of the advent of AFCON–covered in the what will be the penultimate chapter of the fan blog–we’ll do a full-color re-post of the Bulinews update from last week. Football fans the world over have waited so long to watch the great continental showpiece! Take it away, Africa! 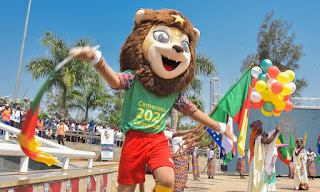 The 33rd edition of the Africa Cup of Nations is just around the corner! The tournament, which much like the delayed Euros that took place last summer, will retain the “CAF 2021” moniker, is scheduled to kick off in Yaoundé, Cameroon on January 9th 2022.

This will be the second African continental Championship since the confederation expanded the field to 24 countries. The first edition to feature that many nations took place in Egypt during the summer of 2019. Algeria are the defending champions, though hosts Cameroon won the last January installment in 2017.

Not all countries have finalized their rosters yet, but it looks to be the case that 12 Bundesliga players will definitely be partaking in what should be an excellent tournament for football fans everywhere! We’re pleased to supply the full list of participants segmented by club below.

We will discuss some of the Bundesliga’s African heritage players who either did not make the cut or play for a country that did not qualify in the club sections below. Those not appearing in the sections get a quick mention here up top.

VfL Bochum’s Christopher Antwi-Adjei and Raman Chisbah (both of Ghana) did not receive call ups to the Black Stars despite representing their country in the past. It should surprise few that two Hertha players, Kevin-Prince Boateng (Ghana) and Ishak Belfodil (Algeria) no longer receive national call ups.

Hebert Bockhorn and Silvere Ganvoula (also both of Bochum) have appeared for Uganda and Congo-Brazzaville (NDR) respectively. Neither of those nations qualified. The Sable Antelopes of Angola also didn’t make it this time, meaning Anderson Lucoqui of FSV Mainz 05 will remain in Germany.

Everyone else is mentioned below. 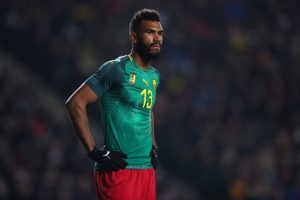 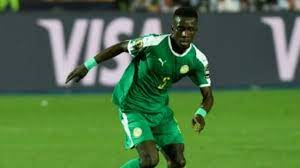 Choupo will be heading down to represent the Indomitables, who hope to head deep into the tournament as the host country. The 32-year-old may not necessarily start all group stage matches on a squad that also includes talented strikers such as Karl Toko Ekambi, Vincent Aboubacar, and Christian Bassogog, but the Bundesliga veteran should get his minutes as an important part of the team.

Lingering health affects from his recent quarantine may affect his minutes in the competition.

Senegalese right back Bouna Sarr–regrettably dismissed as a flop with the German giants–has only made only 25 (mostly meaningless relief appearances) across all competitions for the FCB since transferring from Marseille in October 2020. He’s nevertheless gotten into the good graces of Senegal’s keen-eyed “cult” trainer Aliou Cissé, who has capped him four times in the past two months.

This will prove a very big opportunity for the 29-year-old Sarr to revive his club career. He was a regular starter at Olympique Marseille before some early mistakes torpedoed his Bayern career. 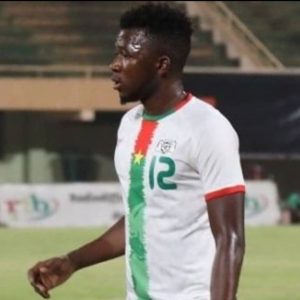 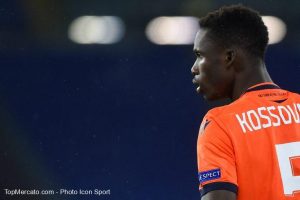 Two of Africa’s most exciting young central defenders call the Bundesliga home. The Burkinabé Tapsoba took German football by storm when he arrived in North Rhine Westphalia after the January 2020 transfer window. Unfortunately, he suffered a rather serious injury during pre-season and is only just now making his way back too full strength.

Kossounou–brought in by die Werkself this summer from Brugge–filled in for Tapsoba in central defense. After a few shaky performances near the beginning of the season, he too has found his stride. B04 trainer Gerardo Seaoné may be without two of his best defenders for three rounds or more as both the Burkinabé Stallions and Les Elephants could progress deep into the tournament. 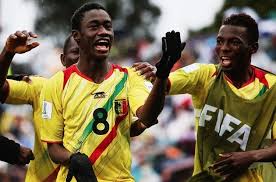 “Les Aigles” of Mali haven’t technically finalized their squad yet, but it would be difficult to imagine head-coach Mohamned Magassouba doing without a pair of world class Bundesliga midfielders. Amadou Haidara of Mali (noted below) also represents Mali. Sammassekou has always been known as a defensive midfield ball-winner in the N’Golo Kanté mode, but club head coach Sebastian Hoeneß has been using him in a more forward role in recent weeks.

This shall prove most intriguing. Apropos intriguing AFCON related matters involving Hoffenheim, fullback Kevin Akpoguma surprisingly didn’t make the cut for Nigeria. The “Nigerian from Neustadt” made a point of forgoing his German eligibility and committing to the “Super Eagles” last autumn. In a big surprise, it looks like his roster spot went to another German football actor from the second division, Jamilu Collins of SC Paderborn 07.

The Kraichgauer have two other players that represent African nations internationally. Kasim Adams (Ghana) hasn’t featured for the Sinsheimers at all this season and is on the way out. The same cannot be said for star striker Ihlas Bebou of Togo. In a way, it’s a shame that the Sparrow Hawks didn’t qualify this year as Bundesliga lovers would love to see him showcase his blistering form for country. The TSG will be grateful that he’s staying put. 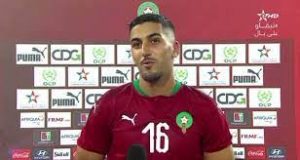 The “Lions of the Atlas”–coached this year by legendary Bosnian trainer Vahid Halihodzic–have just confirmed their final squad. Eintracht Frankfurt’s struggling offensive midfielder returns to represent his country. After playing a very serviceable season last year for as a utility attacker for Adi Hütter’s Adler, the 23-year-old Barkok has been unable to find a role under Eintracht trainer Oliver Glasner.

The SGE recently confirmed that Barkok, who sits on an expiring contract, will not get an extension with his current Bundesliga club. He’s almost certain to move to a different one during this coming transfer window, with promoted teams SpVgg Greuther Fürth and VfL Bochum rumored to be interested. Barkok may understandably wish to expand his field of options, meaning that this tournament counts as a big audition for him. 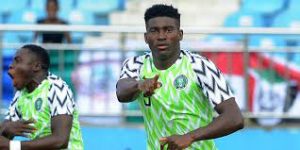 Liverpool’s once (no joke) seven times loaned striking talent has finally found a home in the capital city’s Köpenick quarter. The 24-year-old is having some season as well, scoring an incredible 14 goals across all competitions. Awoniyi’s nine league goals place him in fifth place on the Bundesliga’s scorer table. He’s behind some very good company in Robert Lewandowski, Patrik Schick, Erling Haaland, and Anthony Modeste.

Awoniyi has been in a bit of a slump as of late, going five fixtures without a goal on the spin. The depth of Union’s attacking corps likely means that his club isn’t in a great deal of trouble with their lead scorer off to represent the 2013 continental champions. A fun fact for Africa buffs: If you’ve ever wondered what happened to Antony Ujah, who once played under the late great Stephen Keshi that very same year, he’s actually at Union.

Ujah and fellow Nigerian Suleiman Abdullahi are both still on the Union roster, though neither feature for first the team anymore. Both play for the reserves now. Maybe they’ll get a shot at a transfer showcase in Awoniyi’s absence. 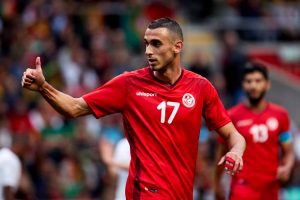 Skhiri is still listed as injured and the “Eagles of Carthage” haven’t officially finalized their squad yet. All of that notwithstanding, it’s almost impossible to think that the FA will accept a cut here. This very valuable midfield diamond means everything to this team. He ran his own axis during the World Cup, during AFCON 2019, and (barring something very much unforeseen) Mondher Kebaier will at least keep him in reserve here. 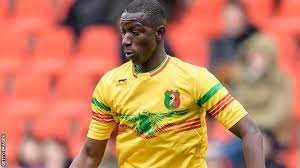 You may have heard a thing or two about the brash former Barça phenom wanting to leave Leipzig over lack of playing time. Well. Thanks to his decision to switch international allegiances as well as clubs last autumn, Ilaix Moriba has a brief ticket out of the Bundesrepublik. He also gets a chance to showcase his skills for the “National Elephants”.

Those looking to the Bundesliga specialists to explain why what was a blockbuster scout and a sensationally prioritized deadline signing isn’t getting more playing time, we don’t really have a lot to go on other than reports that he’s been impatient and a little disinterested in training. Even then, he should have probably gotten more looks than five brief relief appearances across all competitions.

It’s not certain. We shall see. The Guinean national football team (not to be confused with Guinea Bissau and Equatorial Guinea, also playing in this tournament) surprised us by making the knockouts in the last two AFCONS they participated in. Perhaps we’ll get a surprise here.

If Amadou Haidara were to have an awesome tournament for Les Aigles, that would in no way surprise. He’s simply an awesome footballer. 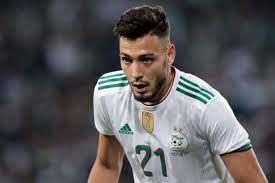 The Fennecs can rely upon one of their returning champions to assist in the defense of their crown. Bensebaini started the first two group stage matches for Algeria in AFCON 2019, including the big upset win against Senegal that allowed them to top their group. He also started through all four knockout fixtures, playing particularly well in all and converting a penalty in the big quarter final win over Cote d’Ivoire.

Back then, Bensebaini hadn’t even played a minute for Gladbach yet. He was also still commonly referred to as “Rami Bensebaini” before the much snappier “y” caught on. One must note with a lamentable tone that this is not a terribly great time for Gladbach to be losing their starting left-back for possibly a month. Yeah. They’d prefer to have him in NRW under any vowel ending his first anglicized first name. 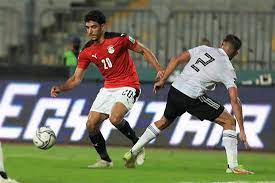 Here we have one player who might not be making the final cut. The Pharaohs are currently working with a 40-man-provisional squad, which they must reduce to 28 before the start of the tournament. Wolfsburg loanee Omar Marmoush has done his best in Swabia this season, filling in for strikers Sasa Kalajdzic and Mohamed Sankoh after horror injuries. Pellegrino Matarazzo’s thrust-into-the limelight lead striker has scored two league goals in ten appearances.

The 22-year-old has also tallied once in two caps for country, but will surely lose out to other top caliber attackers such as Mohamed Salih, Ahmed “Kouka” Hasan, Mostafa Mohammed, and Mohamed Sherif. Stuttgart fans might wish to let out a tentative sigh of early relief. They can already be relieved that Hamadi Al Ghaddioui (Morocco, not called up) and “Silas” (Congo DR, not qualified) will remain in Württemberg.

Good luck to all of the Bundesliga’s continental representatives. We’ll report on any activity involving them from down below during the tournament here on Bulinews. Peter, a huge African football fan, will also report on the competition from his blog.