Our fan-centric repost this week once again takes a look at the weekend attendance figures in the German Bundesliga. What crowds are permitted to return remain under carefully calibrated restrictions. That isn’t to say that supporters across the Bundesrepublik aren’t furnishing us all with the most colorful of aesthetic stimulation. Well done, fellow Staatsbürger/in! Wir sind alle sehr dankbar! 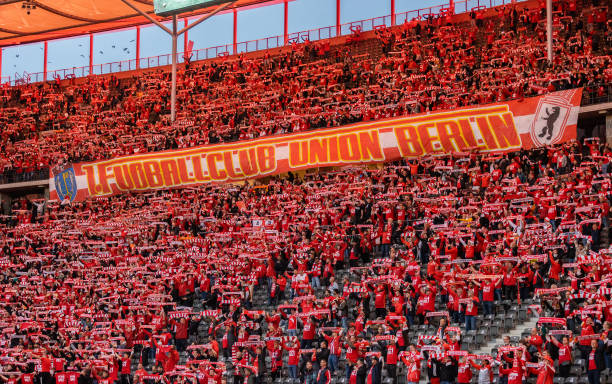 Twenty thousand in the Olympiastadion to watch Union in the conference league playoffs last night! The “Kurven” shall return in their full glory soon!

In our continuing check in with the state live spectator return in Europe’s best attended football league, we’ll get a nice initial look at the pulse of fan interest in Germany’s other nine top tier footballing cities. We learned last week that five of the nine hosting cities sold out their allotment of tickets. In the 2021/22 Bundesliga’s second round, four of the nine fixtures sold out. Freiburg, München, Fürth, and Leverkusen all reached targeted capacity.

This fact in itself can be misleading in that Leipzig, Bochum, and Frankfurt came close to attracting the maximum allowed audience. Venues that came in well underneath their permitted crowd–Hertha’s Olympiastadion and Hoffenheim’s PreZero Arena in Sinsheim–are typically arenas that never reach full attendance anyway.

Political trends in the Bundesrepublik still point to a drift between public policy and the local COVID incidence rate. It should be noted that this is not yet official federal policy and that local districts and municipalities will always remain free to restrict events based on the rate. We’ll continue to report on the seven-day-averages in our weekly dispatch on this topic as it remains relevant to the subject.

The German Red Bulls came in slightly under the amount of live spectators they received approval for at the Red Bull Arena. The attendance figures were actually rather robust for this young club, which still relies heavily on traveling supporters to fill its seats. A few American flags were visible in the stands. Some US expats in and around the Leipzig area evidently considered it worthwhile to see the Bundesliga’s first ever duel between two American head-coaches.

Local COVID rates remain low in Leipzig, though the surrounding rural district has experienced an uptick in recent weeks. Rates were also lower in East Germany last autumn before the second and third waves of the pandemic hit the region hard after a slight delay. In a midweek presser, RB trainer Marsch endorsed vaccinations while discussing looser restrictions in the States.

The SGE found itself at the very heart of the Incident rate controversy late last month when the German state of Hessen threatened to countermand the club’s plans for fans. After Eintracht threatened legal action, however, a standoff was ultimately averted. City and State opted to forgo a feud. Such a decision served as a benchmark of sorts.

Die Adler were able to sell out their pre-season exhibition fixtures, perhaps coming in just a little under the mark here due to lack of interest in the opponent. Some local supporters also may remain confused about the requirements for attendance or have been deterred by complications with the smartphone app. 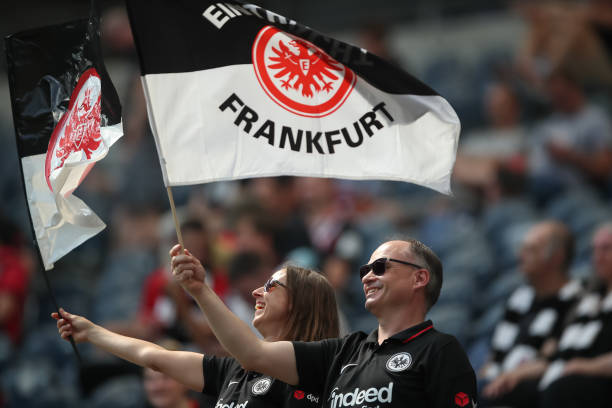 Freiburg remain in the process of moving to a new stadium. The new 37,000-seat-capacity venue should be operational in October. It’s thus no surprise that locals jumped at the chance to attend a fixture in the old Schwarzwald Stadion on the river Dreisam. The fact that Dortmund came to town surely meant that many more supporters wished to attend. Those in attendance were treated to quite the football match. 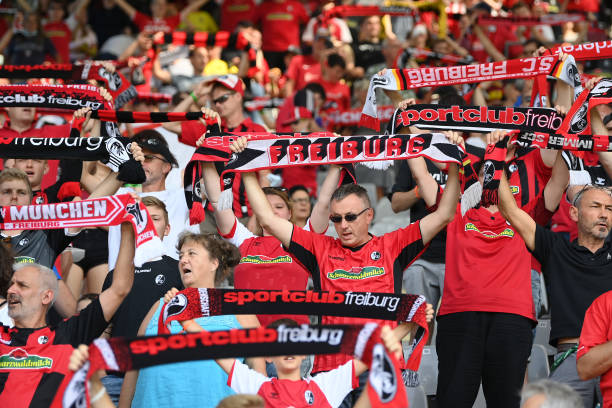 The lack of a sellout in the Olympiastadion doesn’t surprise. West Berlin’s capital city side enjoys plenty of loyal local support, but generally not enough to fill this large stadium. Hertha relies heavily on traveling fans. Wolfsburg doesn’t boast many of those even in non-corona times. Interestingly, cross-town Köpenick club 1. FC Union Berlin will be playing the second leg of their UEFA Europa Conference League playoff here on Thursday. 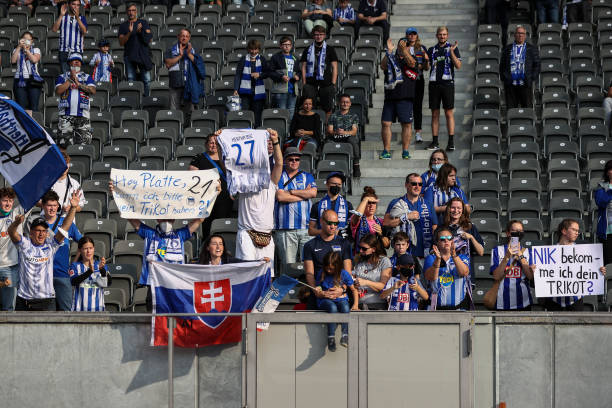 It shall prove interesting to see the attendance figures for that fixture. 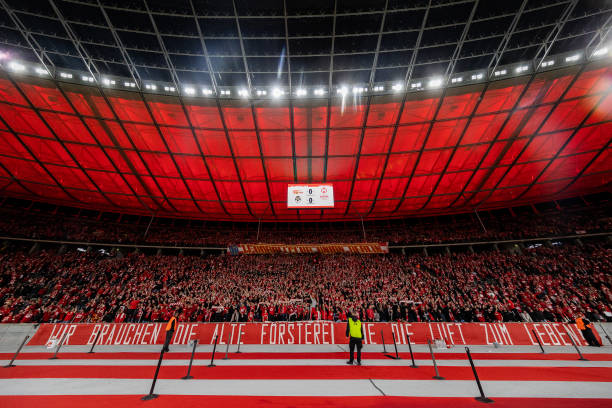 Not all fans of the 1848ers took advantage of tickets on sale for the team’s first Bundesliga fixture at the Castroper Straße in over 11 years. Some concern over the local incidence rate might have played a role in this. The rate of new infections is perilously on the rise in the densely populated German state of Nordrhein-westfalen. The seven-day average has doubled in the last five days.

Germany’s former industrial heartland also, for the same historical reasons as in other countries, happens to feature the most established football clubs. One hopes that the NRW clubs follow the lead of others in the Bundesrepublik in offering free vaccinations to fans on-site at the stadium. 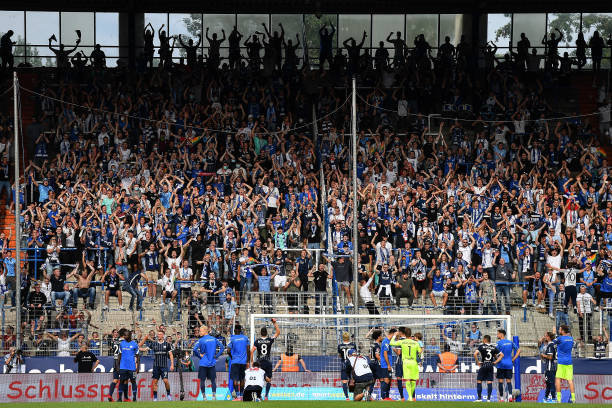 Absolutely no one in the small Middle Franconia town of Fürth considered missing their local club’s return to the Bundesliga. The Kleeblätter only played one top tier season to this one, meaning that this was only their 18th Bundesliga fixture at the Ronhofer Weg. Fürth were among the Bundesliga clubs offering free vaccines to any fans without an appointment outside the stadium. Supporters can even have their choice of the two-dose MRNA or traditional one-dose shot. 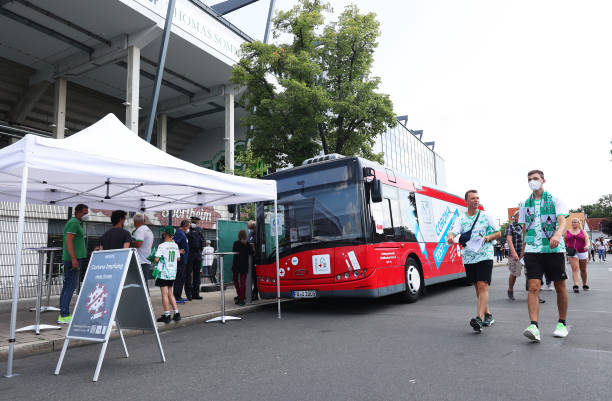 Bavaria recently loosens it’s restrictions on public event capacity in outdoor arenas. Previously, sports clubs operating in Germany’s largest (and by far most conservative) state were not permitted to take advantage of the federal 50-percent-capacity allowance. Low infection rates led to a shift in this calculus. Unfortunately for the SpVgg, a large portion of their viewing options are standing-room-only. There remains a federal ban of this team of close-quarter crowing. The club estimates that the best they can do is 6,700 tickets next time; about 41.2 capacity. 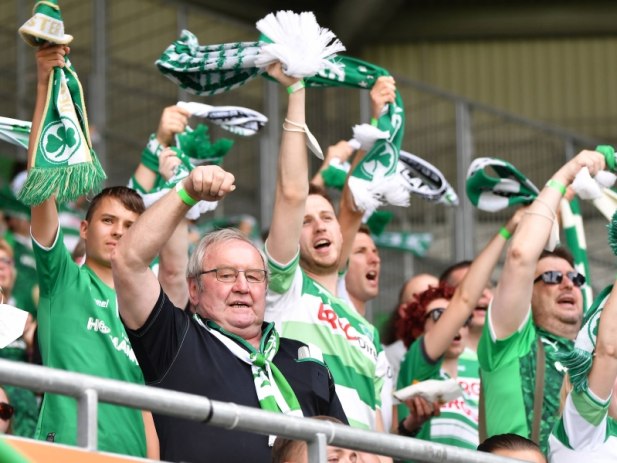 Germany’s red company team got every last ticket into the hands of the fans for their 4-0 romp of Gladbach. That’s the good news. The bad news concerns a rather large infection cluster emerged in Leverkusen over the weekend. Germans thought numbers rising well above 200 per 100,000 were a thing of the past. Regrettably, such a toll serves as a grim reminder that such flare-ups will remain a part of our daily lives for years to come.

At present, there exists no factually presented evidence that the contagion was in any way related to the football match. The town rapidly attempts to get the situation–unparalleled across the Bundesrepublik–under control. The so-called “2G” Concept has been implemented in every area possible and citizens are being encouraged to come to City Hall for free vaccinations.

According to the latest reports from the Rheinische Post, many newly reported cases are among the already inoculated. Those who have been vaccinated are–in most cases–asymptomatic and in no danger. Over 81 percent of Leverkusen’s adults population has received at least one shot. The primary concern remains, as it always has been throughout the course of this pandemic, the availability of intensive care beds in hospitals.

There could be issues here as the town comes close to reaching its limit. 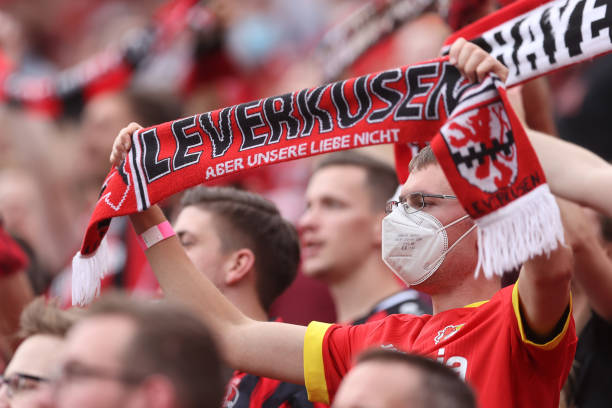 Much more so than in Wolfsburg and the Charlottenburg district of Berlin, no one expects sell-outs in Sinsheim. Dietmar Hopp’s Kraichgauer also rarely receive large traveling fan contingents at the SAP Arena. After the events just prior to lockdown in February 2020, it’s not even clear if the club itself will be amenable to hosting away fans. One could surmise that the next phase of the anti-Hopp protests may take the form of simple boycotts. 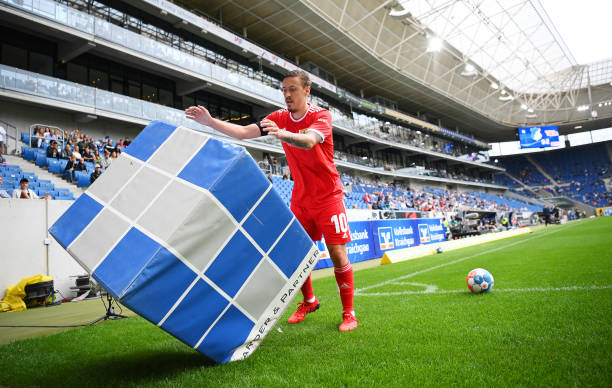 In light of the changes to Bavarian law noted in the section on Fürth above, the FCB should be able to sell 25,000 tickets for the next match. Obviously, the German giants never have problems selling out the Allianz. It may surprise some to know that they do have serious financial problems resulting from this pandemic. The lack of gate receipts remains the main reason the management isn’t active on the transfer market this year. There very well may not be any more moves between know and deadline day. 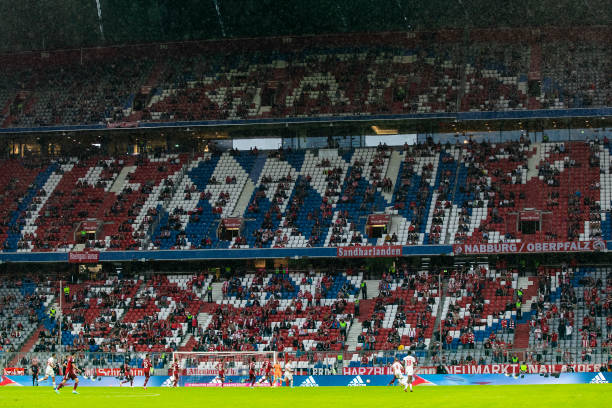