The Bundesliga crowds are returning, with some 35,000 expected for this weekend’s “Top-Spiel” between Leipzig and Bayern. Those of us who love German football couldn’t be more delighted that the “Geisterspiel Era” is now firmly behind us. Moreover, it looks as if the “Era of 50-percent Stadium Capacity” will be history sooner than we expected. 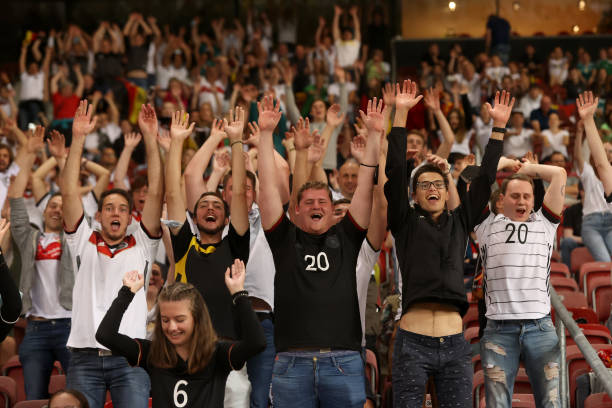 Since the post of last round’s hot-sheet, Stuttgart got a chance to host the first national team qualifying match with live spectators in nearly two years. Not to say that the München crowds that witnessed Jogi Löw’s European Championship squad didn’t count, but this was the feel-good moment that truly ushered in a new era. “Balm for the soul” indeed. Onwards and upwards we march!

Our latest check-in with the state of fan re-entry in Germany’s famed footballing cathedrals shows that hesitance to return to the stadium is waning. Six of the nine fixtures in the third round of the 2021/22 Bundesliga campaign sold out. At the present time, Augsburg are the only remaining club that hasn’t taken full advantage of a federal rule allowing 50 percent stadium capacity (with a cap of 25,000) to clubs with the proper seating accommodations.

In perhaps the most relevant development on the Bundesliga fan scene, VfL Wolfsburg became the second club to announce that they would close their doors to attendees not able to demonstrate proof of either vaccination or recovery. The general political trend in the Bundesrepublik seems to point towards the use of this rule at all public events. Vaccination rates nevertheless remain stalled.

Wolfsburg, Mainz, and Augsburg were the three top-tier clubs unable to sell out their fixtures in round three. Reasons associated therewith differ in each individual case. Stuttgart and Köln were the two clubs who achieved the largest improvements in audience size from the initial fixtures they hosted in round one.

Die Schwarzgelben sold out their third consecutive match under the floodlights. While it did take some time for the BVB to get their season ticket holders to trust their right of return in the first round, passes were quickly snatched up for both the DFL Super Cup and this fixture. One can assume that club should have no problems getting fans from all around Nordrehein-westfalen (and indeed other countries) to come to Signal-Iduna Park.

It’s worth noting that the COVID incidence rate remains significantly higher than any other region in Germany. It will remain so throughout the autumn in the Bundesrepublik’s densely packed industrial heartland. As we saw with the case of Leverkusen last week, contagion can spread rapidly. It can’t be ruled out that some conflict with local officials might take place. 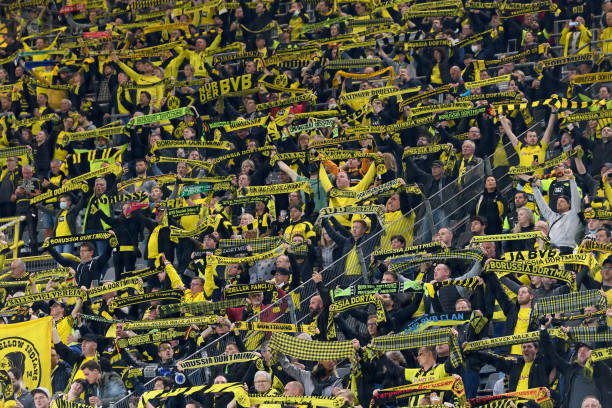 After coming in well short of their (reduced) expectations in their round one fixture, the Württemberg Swabians went for the full allotment this time and got it. A relatively large traveling contingent of SC Freiburg supporters helped out significantly. Freiburg-Stuttgart doesn’t exactly qualify as the fiercest of Baden derbys, but the attendance figures certainly demonstrated the pent-up demand for some inter-regional trip among fans.

The incidence rate in this part of Germany rises, albeit very slowly. High vaccination rates might see it stabilize around current figures, which generally either increase or decrease by small deviations on a daily basis. Stuttgart continues to offer passes at a discount rate to many of its season-ticket holders.

The Rheinhessen were another Bundesliga club not quite prepared to take advantage of their full allotment on opening day. Logistical issues meant that there were only 13,500 tickets on sale for the round one match against Leipzig. The Nullfünfter made everything available this time, yet only 1,000 extra fans took advantage of the chance to see the team live. It’s not entirely clear why the return has been sluggish.

One reason could relate to the other offerings of the region at this time of year. Under normal circumstances, most Pfälzer prefer to take advantage of the kind weather and attend wine festivals through the end of September. Circumstances hardly being normal, there could also be some reticence related to the local incidence rate and supporter distrust shifting local regulations. 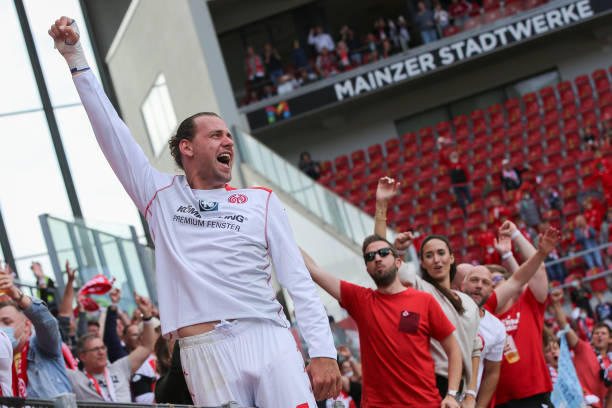 The Fuggerstädter are another Bundesliga club not yet logistically prepared to take advantage of their full allotment. Planned capacity for this game was increased by some 1,800 seats. Although some 1,400 more supporters came this time, the match came in well short of a sell-out. This counts as something of a surprise.

The club celebrating ten years in the Bundesliga is generally well supported and the local incidence rate is practically negligible. Perhaps there remains some confusion about the allowance tules. In any event, matters proceed slowly in this sleepy section of Bavaria.

Die Arminnen, predictably enough, encountered no difficulties selling out the Alm. One acts on the assumption that they won’t encounter any difficulties all season. The town of Bielefeld effectively is this club and vice-versa. When it comes to things to do in this hamlet on the northern Teutoburg fringes, the DSC is pretty much the only game in town.

Neither notoriously horrible weather nor a spiking incidence rate will keep these supporters away. 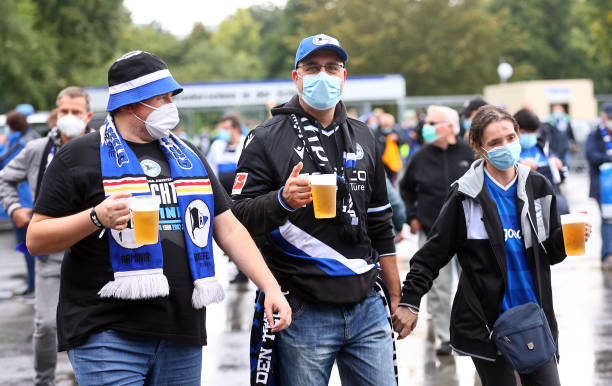 Die Geißböcke of Germany’s cathedral city are no longer alone in closing their doors to supporters without proof of either vaccination or recovery. VfL Wolfsburg also announced that they would implement the so-called “2G concept”, “Geimpft” (vaccinated), “Genesen” (recovered). For now, 16 other Bundesliga clubs are still allowing a small portion of those declining to be vaccinated in under the “3G concept”–“Geimpft” (vaccinated), “Genesen” (recovered), “Getestet” (tested).

It’s highly likely that “2G” will become the norm across the Bundesrepublik this autumn. One could also presume that all of the fixtures at the RheinEnergieStadion will sell out in Germany’s football-mad “Domstadt”. The Effzeh retain some of the most loyal supporters in all of the Bundesrepublik. There are even regular prayer services for the squad in the city’s famous cathedral. 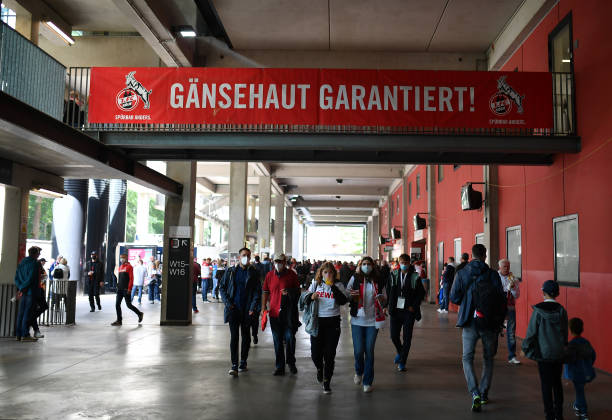 Oliver Kahn has his wish. Bavaria’s more conservative application of the federal allowance of 50-percent-stadium capacity was lifted last week. Only the second opportunity to see Germany’s global brand club since their historic six-trophy season sold out within a matter of minutes. A sizable contingent of Hertha traveling fans were also permitted in, though they probably felt themselves deserving of a refund.

The Stadion An der Alten Försterei should remain packed to its full capacity throughout the season. In point of fact the Union supporters won’t hesitate to quickly snatch up all the available passes for the team’s UEFA Europa Conference League games in the Olympiastadion. We’ve certainly not heard the last from opinionated club President Dirk Zingler. Union will surely be among the first clubs to push for more than 50 percent capacity. 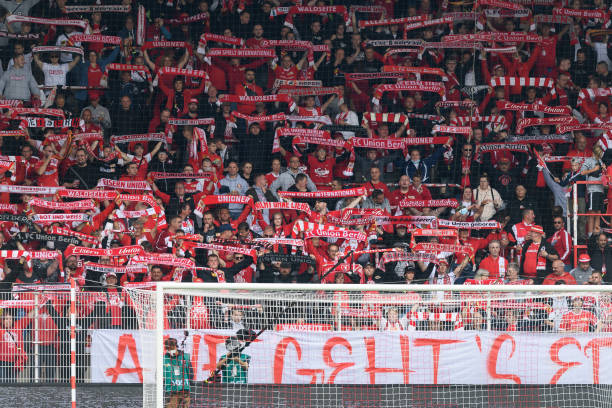 From a Conference League team that everybody wants to see to Champions’ League team that will have trouble filling its seats. The attendance totals from this weekend actually serve as a surprisingly high total for this company town. As noted in the most recent tactics column, die Wölfe opted to poke fun at themselves for new trainer Mark van Bommel’s substitution error in the opening DFB Pokal round. Anyone purchasing five tickets got the sixth free.

The VfL recently announced their attendance cap for the first 2021/22 Champions’ League fixture against Sevilla. A bundle of 12,844 tickets went on sale early in the week. Most Germans are accustomed to feeling as if they have a right to have a playful go at this town/team. Most nevertheless root for die Autostädter to sell out their international club competition matches. There shall be some who make the pilgrimage simply to watch UCL football.