The international break leaves us with plenty of catching up to do. What better starting point than one of the backlogged attendance columns? Quite a great deal of football has come and gone since this one was initially published. One nevertheless doesn’t wish to give the supporters from hosting cities anything resembling short shrift. 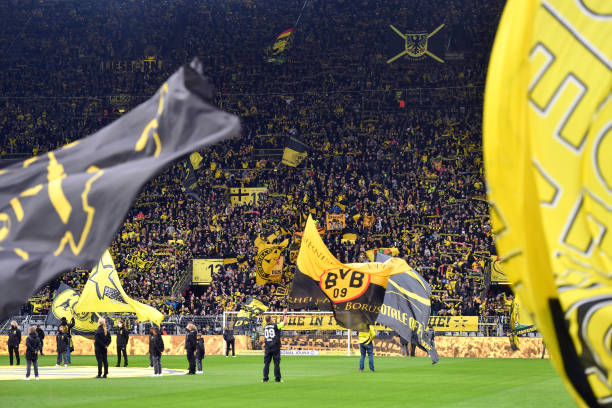 Full “Balm for the soul” indeed.

Our weekly column on the state of fan re-entry across the Bundesrepublik returns to take a look at the penultimate Bundesliga round before the final international break of the season. As the cold winter beckons, we’ve seen the concepts in use by the clubs mostly remain in place in preparation for what will be the second cold/flu season of the global pandemic.

Much will transpire this winter in Germany. In all likelihood, a new governing federal coalition will be formed. That shall bring likely with it new federal policy for managing the pandemic across the 16 federal states. COVID Incidence rates, obviously with a different degree of relevance, will rise significantly and probably won’t decline until the spring arrives.

In the quest to get more citizens vaccinated, it does not appear that either side of the divide will give ground. It is such that the concepts used to regulate fan re-entry will remain in place, at the very least until new federal policy arrives with the new federal regime. We’ll re-post the four main concepts (which do have their own offshoots) for anyone needing a refresher.

Only spectators demonstrating proof of vaccination and recovery may attend.

A small amount of tested patrons may attend, but they must all sit in a separate, cordoned-off block.

Fans vaccinated, recovered, or tested may attend. A smaller proportion of seats are reserved for the tested, but they may mix with the rest of the crowd.

Again, note that there are more detailed variations of these in use across the country. We shall always consider reporting on other ones should there be a large deviation from any of these core concepts. At the moment, nothing too far distanced from them exists.

Nothing much to say here apart from the comments conveyed in previous columns. The PreZero Arena will not sell out; not even when Bayern or Dortmund come to town. We’ll again emphasize that the German federal state of Baden-Württemberg permits full stadium capacity provided events are run with “2G”.

The Sinsheimers have no real reason to bother with this as they never reach full capacity. It appears as if some more fan groups are endorsing a return to the stadium, but others continue to protest against the “BaWü Bargain” that offers greater freedom to those either vaccinated or recovered. The issue remains something of a political powder keg in this region.

It doesn’t get much closer to a sell-out than this. The overall fan-scene at Signal-Iduna was still an absolute smashing success last Saturday. Köln and Dortmund actually have a fan exchange that usually pushes attendance figures in this particular fixture. It’s always a pleasant sight to see the respective fan-groups co-mingle and coordinate chants, songs, and cheers.

As noted in previous columns, one shouldn’t expect full ultra return to the BVB stands until all restrictions are ultimately lifted near the end of the season. The reason for this is sheer volume. There exist literally hundreds of groups in the region. Dozens of them will not refuse their chance to make a political point. 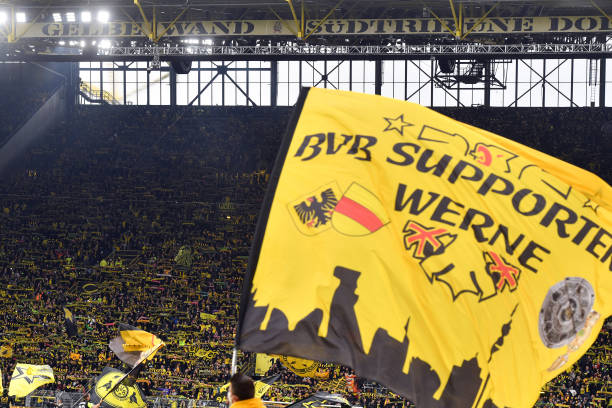 In the battle of Germany’s two “company teams”, a sell-out was always out of the question. There isn’t much traveling support for Wolfsburg. That’s perfectly understandable as well, seeing as how many supporters have other things to do on their hard-earned weekend that finally came after a long set of factory shifts.

There were some very touching scenes involving the local Leverkusen ultras following the latest disappointing loss. In the event that anyone missed the touching spectacle, Bayer captain Lukas Hradecky led the team over to the FanKurve afterwards. There the ultras cheered on their side in spite of the dour faces most of the players wore.

German fan footballing loyalty truly extends beyond results. The backing for Germany’s red company team in particular has always been strong through many years of disappointment. Wonderful stuff. 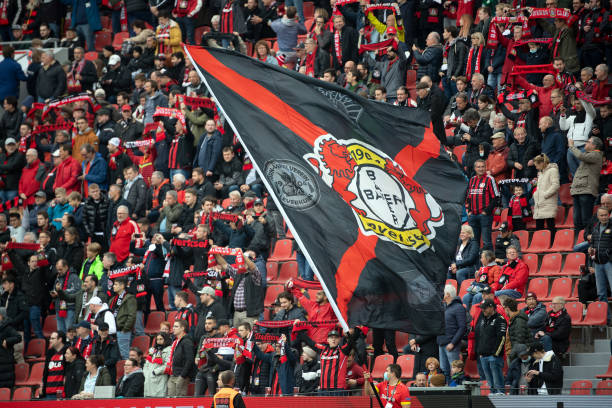 After some wrangling, Union were able to get their compromise plan approved by the Berliner Senate. Some of the club ultras fulfilled their end of the bargain and turned up with the limited atmosphere boycotts. Irrespective of whether organized fan groups planned on returning, this particular fixture would have sold out in any case. No one in Köpenick would want to miss out on Bayern’s visit.

The situation in Berlin mirrors that of Baden-Württemberg. The capital city-state allows full capacity for public events if organizers switch to “2G”. Just like in BaWü, those who don’t wish to get vaccinated appear unlikely to budge on their stance. A long winter of tumult looks to play out in these areas of the Bundesrepublik. 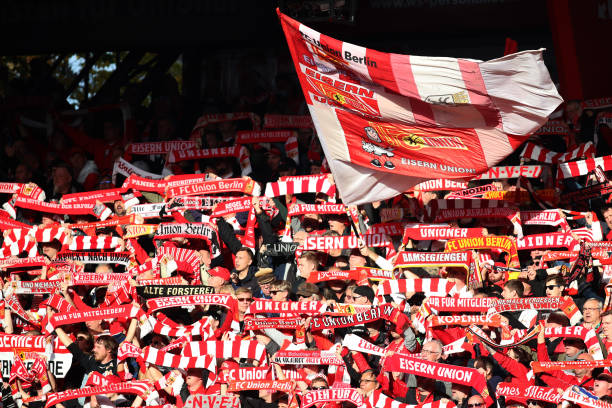 Freiburg’s recent switch to a “2G” compromise concept actually escaped the notice of the most recent attendance column. It was falsely reported that the Breisgauer would be aiming for 50 percent capacity with “3G” under the acting Baden-Württemberg statutes. A columnist apologies for not catching the switch, though there were some other German media sources who didn’t pick up the comparatively quiet shift.

Freiburg (like Mainz) have some separate sections cordoned off for the non-vaccinated and recovered; a hybrid concept we discussed a bit in earlier versions of the column. While that might have played some role in this match not selling out, the size of the crowd is still very large when one considers the opponent.

On the topic of incorrect information, it may still be the case that some Freiburg ultra societies are holding out on a return to the stadium. The author simply hasn’t been able to find them. A reasonable assumption, knowing something about the protest inclinations of the locals in this region, remains that Freiburg fans generally prefer to protest inside the stadium and in front of the cameras. 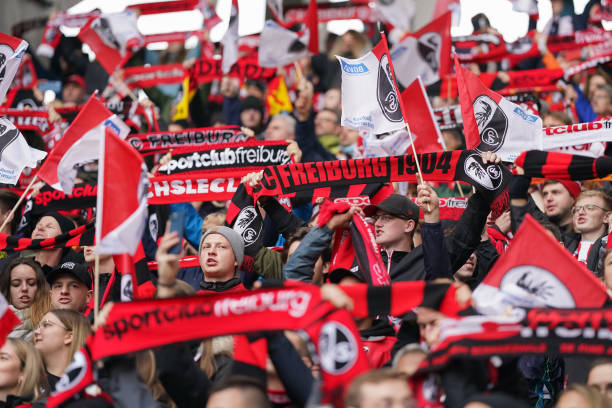 Bielefeld, courtesy of a special dispensation, can pack the Alm if they so desire. This applies even to the standing bleachers. There have already been several sell-outs at the home venue this season. The level of interest might be slipping a bit. That’s a fair conjecture in light of the fact that the team is undeniably slipping as well.

All the same, it’s sad to see the Alm not sell-out. Counting last season’s drab “Geisterspiel Era”, it’s been twelve years since fans of this club have gotten a chance to see their team play in the top flight. While the DSC–true to form as the most mercurial club in German football in the past 25 years–may be headed straight back down again, the full-force of this great fan-base is something that all Bundesliga lovers want to see before they drop back. 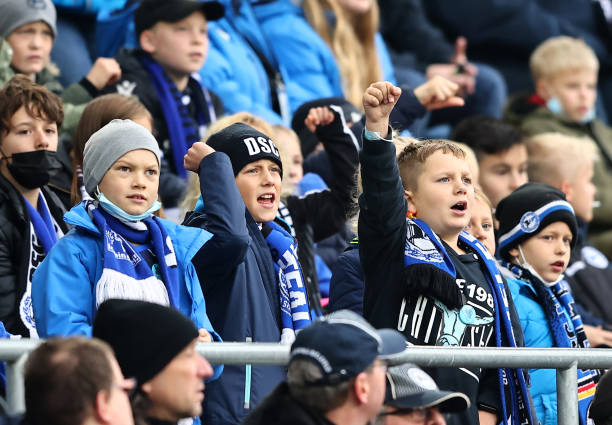 The Hessen Eagles went for full capacity under “2G” and still got a good turnout. Those of us following the Saturday Night Top-Spiel closely are certainly of the opinion that the crowd successfully influenced the match. Ultra participation was noticeably lacking. We’ll all have to wait awhile before the full SGE fan scene returns.

The fan societies of this club (justifiably) view themselves as trend setters for others across the country. As a reminder, it was the Frankfurt ultras more than any other group who initiated the movement to end the dreaded Monday night fixtures. One day we will get them all back. A decent gauge for how many diehard are in the Frankfurt stands can be found by listening intently to the crowd whenever Martin Hinteregger touches the ball.

As soon as one can hear a faint rendition of “We’re Hinti Army Now” emanating from the stands, one can assume that a core group of diehards are back. 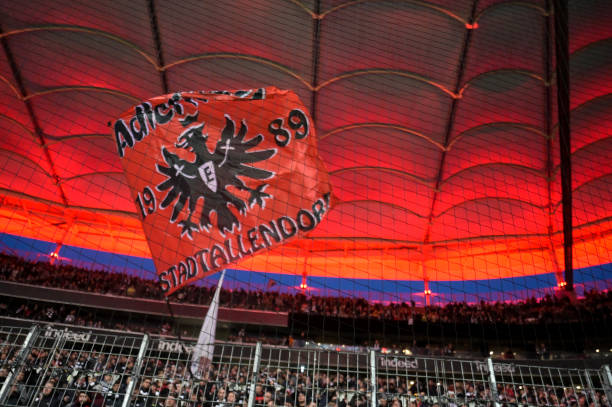 For reasons still unknown, the Fuggerstädter again declined to take advantage of the full capacity allowance accorded them by the Bavarian government. The Bavarian Swabians nevertheless did earn their second consecutive sell-out at the WWK Arena. If the noise level during what was a massive win for the team is any indication, the fans stand firmly behind their club despite the poor start to the season.

Naturally, one can’t cover this area of the country itself without mentioning the very high incidence rates in South-East Germany. Both Augsburg and Munich qualify as high-risk areas according to this metric. Even if the region also boasts high vaccination rates, the political tendencies in this region tend to lean toward the conservative. 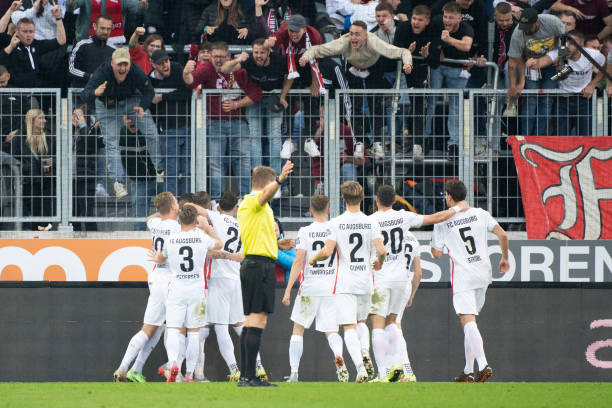 Showing remarkably few signs of “Pokal fatigue”, a fairly sizable crowd turned out at Borussia Park despite lousy weather conditions and a weak opponent. The atmosphere amongst the Fohlen faithful was great. One must concede that it still felt as if the ultras were holding back just a bit on their standard cheers. There may have been some Pokal fatigue at work after all.

With most Ultra societies endorsing a return, we should see many more sell-outs for this Westphalian side. Interest may, on the other hand decline, a bit as the foals get the weaker opponents at home as the “Hin-runde” wraps up. A favorable schedule remains good news for the team in general, but perhaps not for attendance. 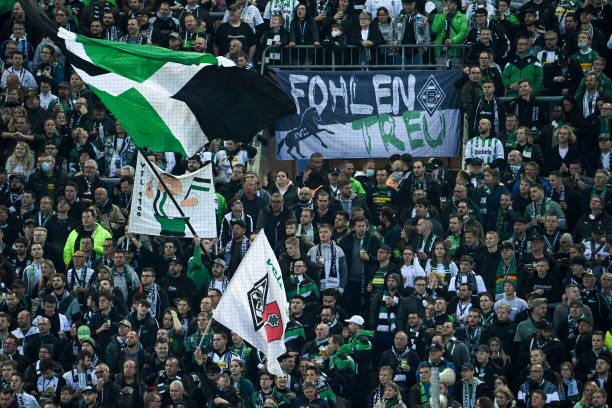 Time for, depending on one’s perspective, can be either the best or worst part of the column. Nothing beats the anticipation of another Bundesliga weekend. Amid this joy we also have the incidence numbers to report upon. They’re about as disconcerting as they were at this time last year.

Context is necessary. The incidence rate matters significantly less as most of the positive cases are among vaccinated individuals who are asymptotic. As of this writing, there are no reports of intensive care units being overwhelmed anywhere in the Bundesrepublik.

For now, it appears as if the main fear driving all restrictions during the pandemic has been averted. Cases among the non-vaccinated remain a cause for concern in that health care systems might still face some strain.