Consider yourself forewarned. There’s more German politics to be discussed in the latest edition of the weekend attendance column appearing on Bulinews. Yes. It must be done. One can’t exactly explain why regulations are so different all across the Bundesrepublik without touching upon the issue of there not being a federal regime in place at the moment.

Not to worry, however. The Union fans came through again last night in the Olympia Stadion.

Instead of Baerbock, Scholz, and Laschet, we get to lead with this: 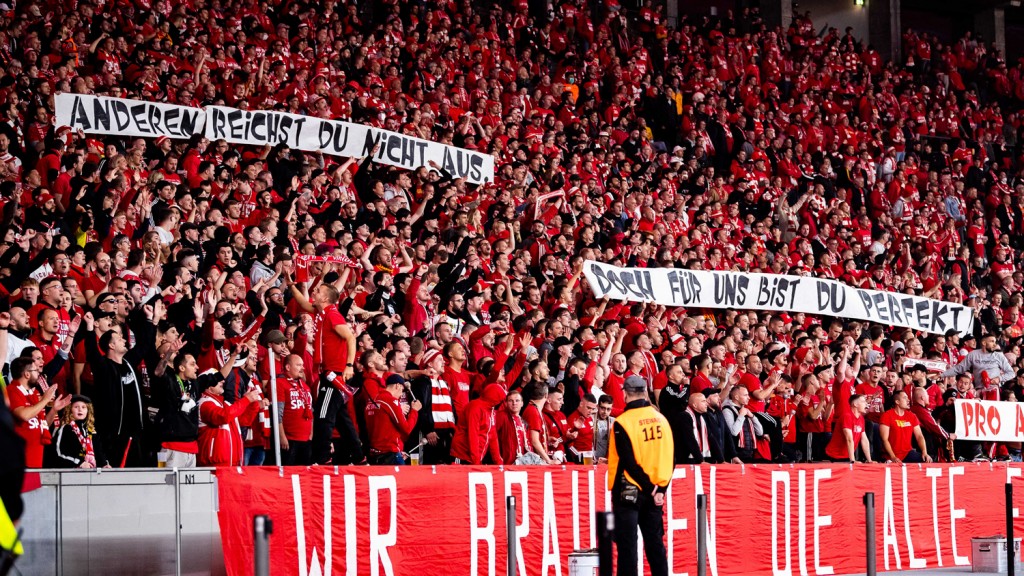 And, by the way, anyone who simply read the headline about a small pocket of Union supporters targeting the Maccabi Haifa traveling ultras with anti-Semitic abuse needs to read the entire article. Most of the Eisernen ultras stood up against it and there were also cheer exchanges and commemorations. Football hooliganism always leads the story, but it’s never the full story. This club’s ultras remain left-leaning.

Focus on the big picture. It happens to be a very nice one. 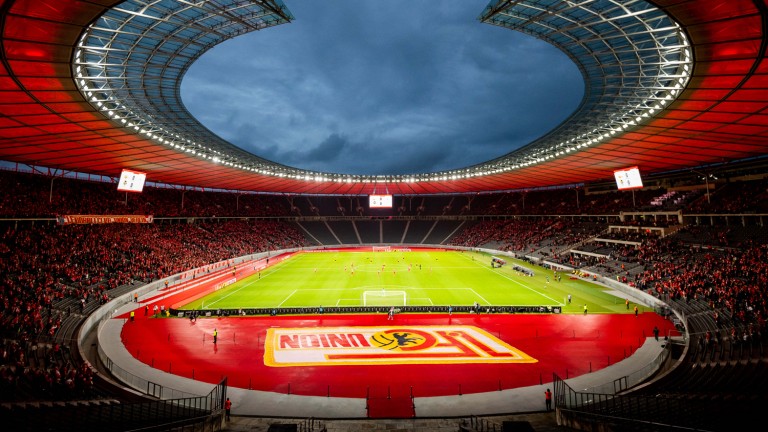 Autumn arrives in the Bundesrepublik. With it come the winds of change. The path back to full-stadium capacity in German football venues continues to proceed at a rapid clip. Note that, as we discussed last week, all policy action takes place at the local city-and-state level. German federal elections took place on Sunday, but changes to nationwide standards remain essentially frozen until such time as a new governing coalition can be formed. Given the current party constellation, this may take months.

Accordingly, it is the semi-autonomous German city-states that are leading the way. Namely, the Hanseatic cities of Bremen and Hamburg. At the present time, three 2. Bundesliga clubs have been given clearance by their local leaders to fill their stadiums to full capacity. SV Werder Bremen are permitted this privilege, as are the two Hamburg clubs HSV and 1. FC St. Pauli. The next major issue for these organizations is whether they wish to operate with so-called “2G” or “3G” concepts.

The domestic debate regarding these two concepts continues to rage. “3G” (“Geimpft” (vaccinated), “Genesen” (recovered), “Getestet” (tested)) and “2G” (“Geimpft” (vaccinated), “Genesen” (recovered)) differ in that the former allows some fans who do not wish to get vaccinated through the turnstiles while the latter does not. A little less than one third of Germany’s adult population eschews inoculation for a confluence of reasons that span the political spectrum.

FSV Mainz 05 and a few others have rolled out what they deem to be a “compromise concept”: the “2G-plus” regulation. This system of entry isn’t, in fact, all that different from “3G” in that it reserves some seats for supporters who do not wish to show proof of either vaccination or recovery. If anything, however, it is not a concept that either side will deem an acceptable compromise. The non-vaccinated are confined to a special small section of the stands; a clearly delineated zone sure to remind observers of a leper colony.

DFL chief Christian Seifert continues to endorse the return of fans. Health officials in the current governing regime continue to express the hope that “2G” will assist in getting a larger portion of the population vaccinated. Health minister Jens Spahn (CDU) and the Bundestag’s resident epidemiologist Karl Lauterbach (SPD) have spoken on the topic of football venues and other large-scale public events, making clear all clubs should eventually move to “2G” until the adult vaccination rate lifts from its current stagnation around 68 percent to 75 percent or higher.

In the German federal state of Nordrhein-Westfalen, where the majority of German football clubs are located, new regulations were announced just today. Using a new formula for standing-room only bleachers, most NRW clubs can get above the current 75-percent-capacity cap and move into the 80 percent range. Most every Bundesliga club in the Ruhr and elsewhere have revealed that they wish to at least get to 80 percent capacity by the end of October.

Unsurprisingly, the Middle Franconians had no problems selling out the Ronhof when Bayern came to town. Such a visit always serves as a huge event in towns like this. Everyone cancels their other plans when the German giants make a stopover. The atmosphere was genuinely great and it would be fair to say that the supporters willed their team to an overachieving performance.

The Kleeblätter are already well over their initial 50-percent-capacity allowance of 8,313 fans and their truly isn’t much stopping them from aiming for full-capacity soon. Bavarian corona-ordinances currently permit 75-percent capacity if the clubs wish to strive for it. In practice, this translates to 12,470 tickets likely to go on sale for the next match. 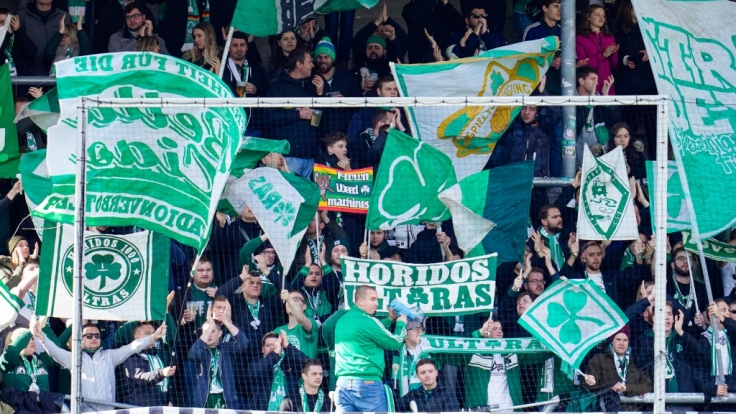 Leipzig didn’t come close to selling out the Red Bull Arena for Hertha. The Saxons also only got a crowd of roughly the same size for Club Brugge in the midweek UEFA Champions’ League match. Recall that this remains a very young club and its supporters could hardly be described as affluent. The club often offers €5 specials late in the week.

The local corona incidence rate remains lower in Leipzig than most places in the Bundesrepublik. RB are nevertheless taking no chances as autumn rolls in and have announced that they will reduce planned capacity to 23,500. A much larger audience of 34,000 attended the home fixture against FC Bayern München in week four. 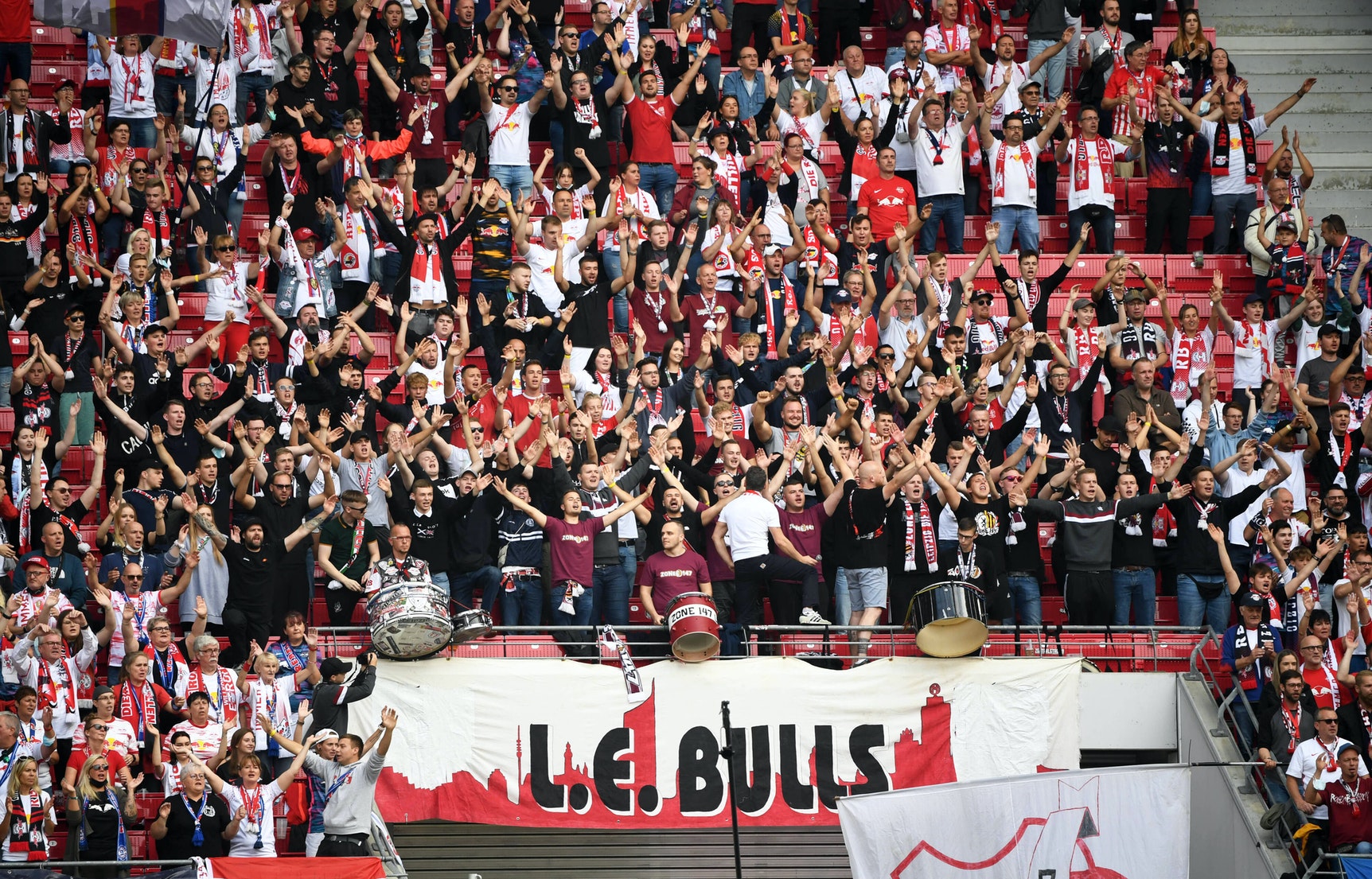 Not quite a sell out at the Deutsche Bank Park, where the strength of the team and Frankfurt’s adoption of “2G” regulations might have played a role. After a legal standoff with the German state of Hessen, state officials did give the club clearance to fill its standing bleachers last week. This would increase maximum capacity to 31,000.

The SGE nevertheless opted not to take advantage. After mulling over the idea of allowing non-vaccinated-or-recovered patrons into said bleachers, the club’s administrators felt it better to stick with “2G-plus”. Using this guideline, Eintracht have announced that they hope to put 40,000 tickets on sale for the game against Hertha on October 16th and go for full capacity against Leipzig at the end of the month. 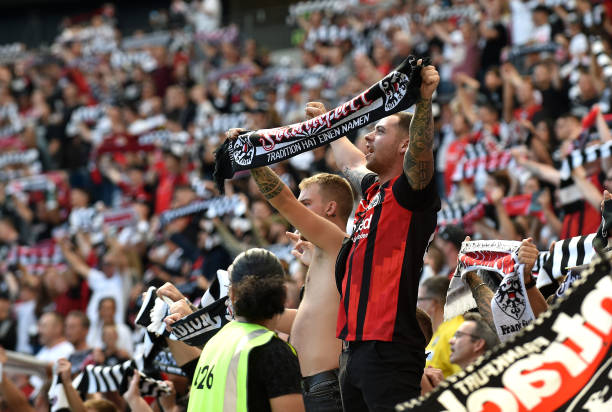 Germany’s red company team has gone back and forth on its spectator allowance and even changed from “2G” to “3G’ and back again. After a local contagion scare in round two, die Werkself now wish to retain stricter protocols. Club boss Rudi Völler has been outspoken about the need for German citizens to get vaccinated. Back in August, the former national team coach called upon all residing in the Bunderepublik to demonstrate “social solidarity.”

Planned capacity in this NRW town was reduced by nearly 3,000 since the previous hosting week. The new Nordrhein-westfalen corona ordinance announced just today, allow for clubs in the Ruhr region to sell up to half of their standing places on top of the 75 percent capacity cap. In Leverkusen, this translates to a crowd of around 80-percent-capacity (24,200) at the BayArena. As of yet, there’s no word on whether B04 plans to take advantage. 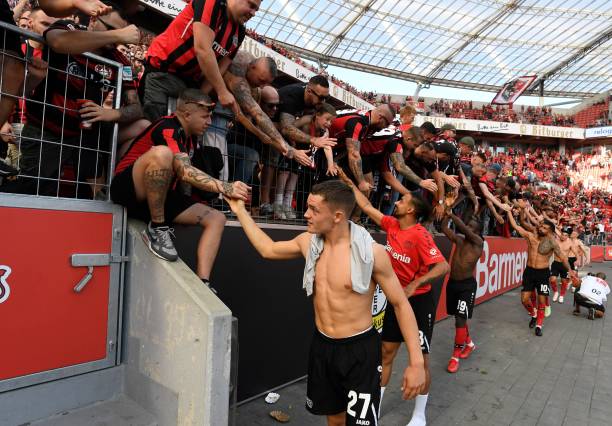 There are some conflicting attendance figures out there, with some sources claiming that a crowd just short of a sell out watched Kevin Behrens and die Eisernen best visiting Bielefeld 1-0 on Saturday. This column assumes a sell-out since the numbers are so agonizingly close. German footballing magazine Kicker reports an audience of 11,000. It’s highly unlikely that six Köpenickers didn’t jump at the chance to enter on a last-minute free pass.

It also remains highly likely that Union and its ever-outspoken President Dirk Zingler will pack the Stadion An der Alten Försterei just as soon as the Berliner Senate gives them the green light. The FCU are once again hosting a UEFA Europa Conference League match at the Olympiastadion on Thursday. It’s probably safe to assume that the country’s smaller capital city club will draw 20,000 or more once again. 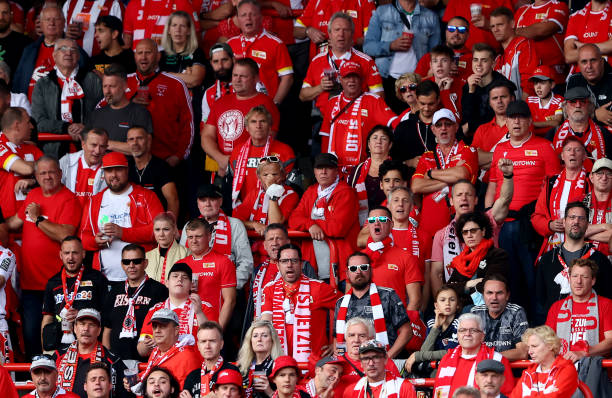 The two league teams with the worst attendance rates squared off last weekend before a paltry crowd in Sinsheim. No one is surprised. No one cares. About the only interesting matter attendance-wise insofar as these two clubs are concerned is that Wolfsburg (sadly) came nowhere close to selling out their Champions’ League match last night. German football lovers let out a collective sigh. 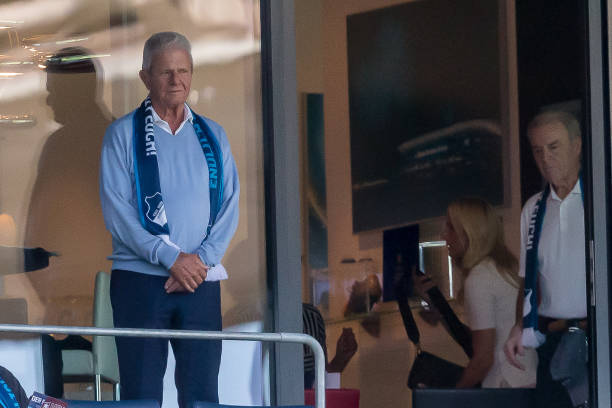 Naturally, BVB vs. BMG gave Bundesliga enthusiasts some of the best visuals of the weekend. We love dissent. Even if some of the banners denouncing Maro Rose on his return to Gladbach could be considered in slightly poor taste, we were very pleased to see them again. German football culture simply isn’t complete without the banners. 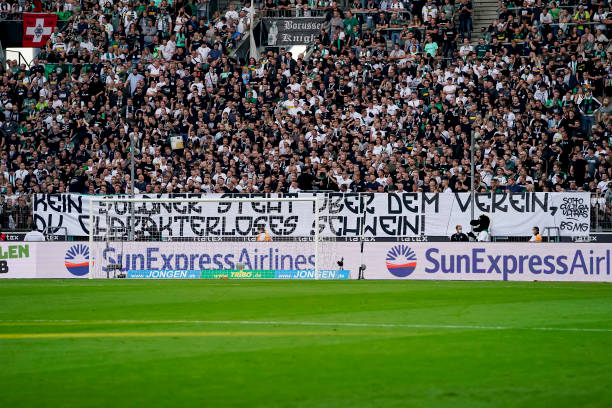 It shouldn’t be terribly long before the foals permit 50,000 plus back into Borussia Park. The club has expressed hope about attaining the number for home fixtures at the end of October, though no concrete plans are in place yet. Gladbach must of course work within existing NRW ordinances. An audience of 42,000 to 45,000 might be more realistic under existing rules. 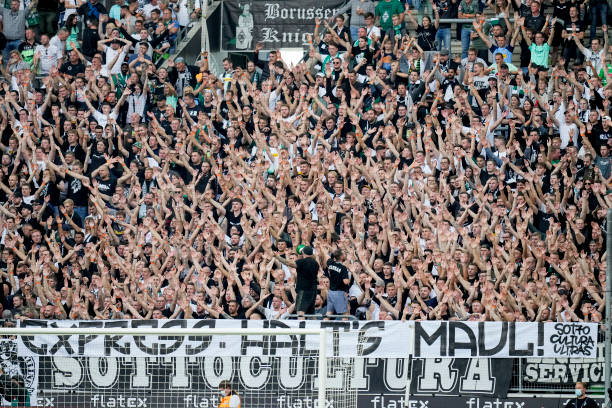 Local fans bought out the Castroper in support of their team after they returned from a historic 0-7 defeat in Bavaria. It proved nice to see the loyal support back the 1848ers following a horrible humiliation. At last check, the Ruhr club plans to maintain a “3G” concept for the foreseeable future. Irrespective of which concept one personally feels is better for Germany as a whole, it’s difficult to argue with this organization’s treatment of its fan-base. 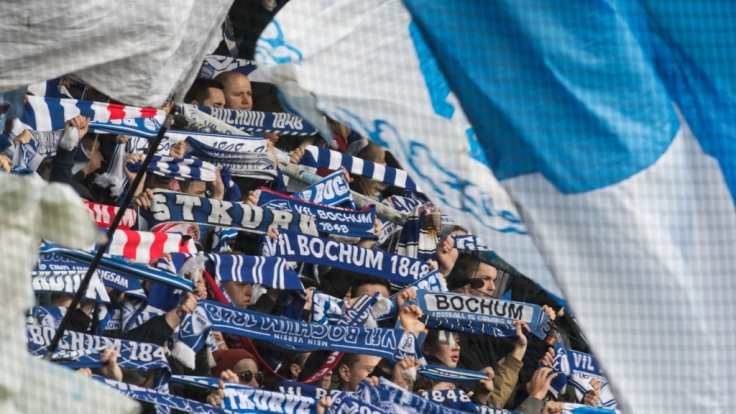 The scenes were simply amazing. Approximately 60 percent capacity was the best the Breisgauer could do for their final game in the Schwarzwaldstadion. That seemed more than enough. The amount of noise generated left one feeling as if every last seat was filled. Few of us look forward to the club’s move to the Europa Park Stadion. It may take the local ultras some time to find the groove in their new Kurve. 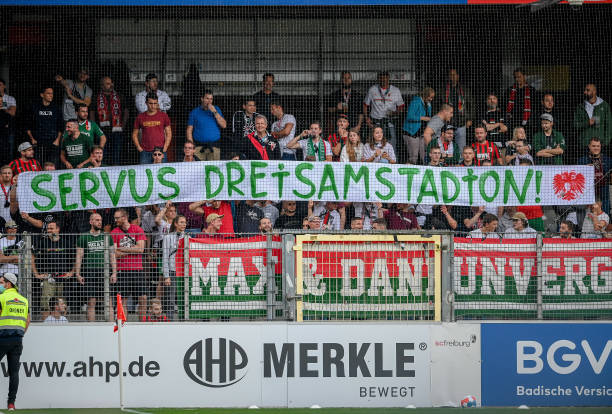 In any event, this club upgrades from a 24,000 seat arena to a 34,700 capacity one after the international break. The state of Baden-Württemberg continues to roll back restrictions, but most of the businesses operating within the large state are moving to “2G”. We shall see how the SCF wishes to handle matters soon enough. 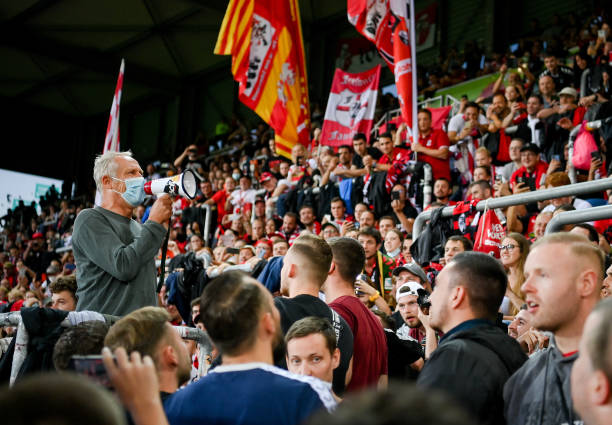