Do forgive a writer if he’s a tad emotional when it comes to this subject. Unfortunately, the realities of lockdowns within the Bundesrepublik mean that the “Fan Scene” column over at Bulinews must take a hiatus. When the Bundesliga returns this weekend, there shall be precious few fans to report upon. 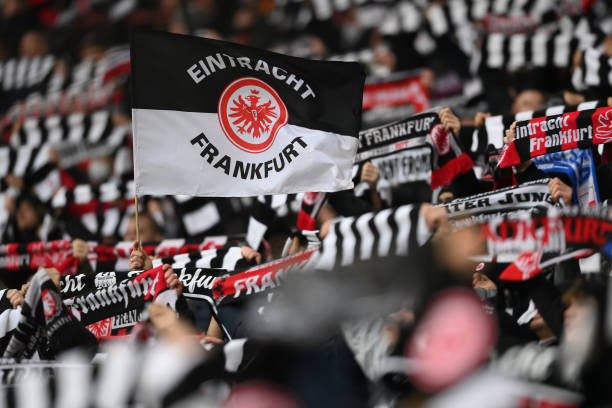 That’s all folks. At least for the time being. All that remains in order to get caught up is one last full-color repost of the final report following round 17. This obviously constitutes horrible news for a German football lover; one that values completeness at that.

Present circumstances most likely mean that there won’t be another fan scene report for at least four or five rounds. It could possibly last longer. The writer will keep up to date on the developments in the “fans return to stadiums” box over on the Bulinews front page.

Better days shall once again return. For now, all that’s left to do is bid farewell to wondrous (if not severely limited) scenes that we were given.

Our final attendance column of 2021 could not come against the gloomier backdrop. Sweeping new federal regulations approved yesterday mean that this feature will be taking an even longer hiatus than expected. It may be months before we can once again take a nationwide look at the footballing fan scene across the German Bundesrepublik.

With respect to the ongoing pandemic, the news inside of Germany is not all bleak. Incidence numbers and hospitalization rates are, with few exceptions, trending in the right direction. While the overall vaccination rate in the country climbs up only very gradually, the rate at which the already vaccinated are receiving their additional booster shots rises quite rapidly.

In an edition of this column appearing only nine days ago, we reported that 23.8% of the German population had gotten a booster. That number is now 33.8%, amid a notoriously problematic roll out plagued by supply and logistical issues. It’s perfectly reasonable to assume that the booster rate will near the 70-75% plateau of country’s overall vaccination rate within six weeks.

This particular Bulinews feature is not an “analysis/commentary” item. Accordingly, we refrain from making political statements therein. Some basic facts concerning on the new COVID Omicron Variant, on which there appears to be broad scientific consensus, nevertheless seem relevant. Like many of the variants that came before it, evidence suggests that the new strain is more contagious, but certainly not more deadly.

The new variant is also undeniably more resistant to previous incarnations of vaccines and boosters. This does not mean that vaccinations and boosters are ineffective against the virus as a whole. Quite the contrary. While existing inoculations may not be fully able to prevent symptomatic infection, they remain extremely effective in preventing severe symptoms, hospitalization, and death.

A fixture straddling the very definition of a football match took place before an empty house at the Allianz. Even goals scored via sublime continue to feel hollow when the “can-can” blares out in an empty stadium. The good news insofar as Munich, and indeed the entire state of Bavaria, is concerns remains the continually sinking incidence rate. Districts once flirting with 1,000 are now practically all under 300.

There is still quite a bit of bad news in rural Bavaria, where many country hospitals have hit full capacity and need to transport patients. There nevertheless appears to be enough capacity within the state itself to absorb most of the hit. Augsburg country and Heidenheim, to take two state examples football fans may be familiar with are only running at 50-70 percent capacity. 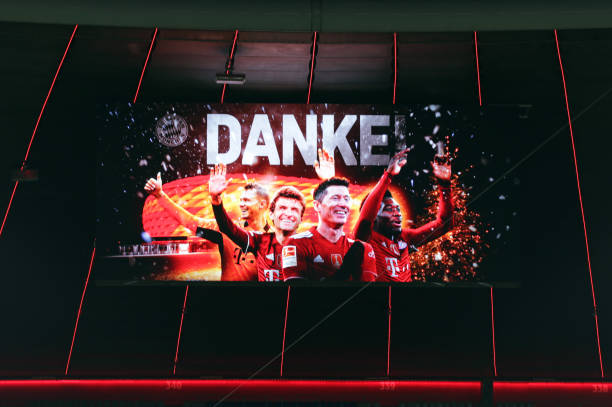 Credit to the RB supporters, who unfurled several banners outside the stadium urging passers-by to get vaccinated. Matters improve at a very slow clip in the Bundesrepublik’s least vaccinated state. One can see how the incidence rate and hospital data doesn’t decrease at the same rate as in states with a more proportionately protected populace.

Footballing-wise, another bad upset loss for the club that recently fired its COVID-quarantined trainer. Football was never a particularly kind business, but something like that does feel like a new low. In any event, the Leipzig fans who let their presence be known on the roads outside the venue provided a kind and polite appeal to their fellow citizens.

Restrictions won’t be going anywhere in this state without a much higher vaccination rate. 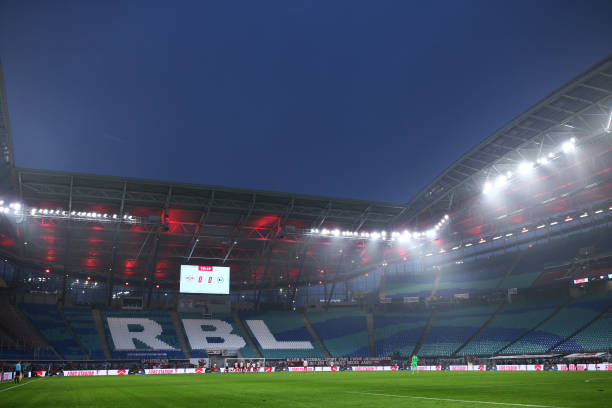 The selected match of the weekend also delivered the best atmosphere. The SGE supporters had no difficulty keeping the songs and chants going, aided in large part by a team that consistently kept up the tempo. This proved a wonderfully heartfelt performance both on the pitch and in the bleachers. With most of the data looking to be headed in the right direction, one can only hope to see it again soon.

The Kraichgauer made sure to put their 750 permitted attendees front and center near the halfway line in front of the cameras. We’ll nevertheless stick to our decision to label this paltry Baden-Württemberg allowance a “Geisterpiel”. This isn’t anywhere close to football for the masses. One doesn’t expect such a thing to return anytime soon to the least vaccinated state outside the former East.

A somewhat unfortunate incident here at the Castroper. Max Kruse of Union Berlin got pelted with plastic beer mugs multiple times when claiming the ball out of touch. The veteran German striker vented a bit on instagram about the “Ruhrpott Asis” (perhaps the reader can infer the translation there) while still saying that the club and and most of its fans remained “likable”.

Such incidents do unfortunately remain rather commonplace in German stadiums, as much as we’d all like to pretend that practices of previous decades have been left behind. In other contexts, a beer shower can be considered a compliment from the home town fans. This act of hooliganism definitely wasn’t one of those cases. 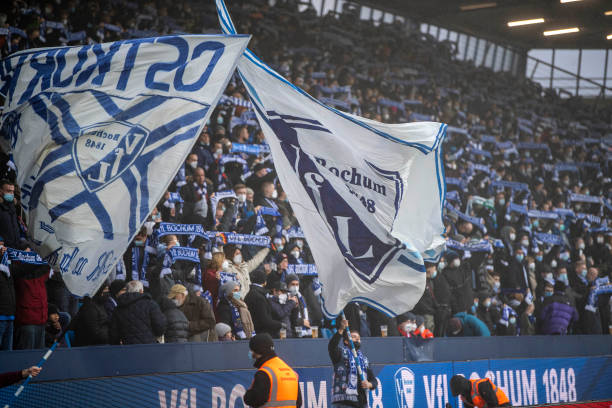 The sad tale of one of the Bundesliga’s most over-matched team continues without any live fans to watch it unfold. In drawing Bavarian rivals Augsburg over the weekend, the Kleeblätter were at least able to avoid setting the record for the weakest ever Hin-Runde points haul in league history. At least the local health data continues to improve in the first state to re-implement strict COVID-related restrictions.

The match that very well may have officially killed off the 2021/22 title race at least featured some live fans in the stadium to witness perhaps the campaign’s biggest turning point. Over the past decade, most German football lovers invariably recall where and when they were during the critical moment when Bayern sealed the deal. Note that this was never the day that the FCB officially clinched. When it’s really over, we know.

A decent idea for a separate article would involve traversing the past decade, chronicling each day that the league was unofficially decided. Since that’s beyond our scope here, we’ll just reference the Bayern-Leverkusen match during the final round before the Christmas break last year. That was definitely the moment when we understood that only Leipzig remained in the way of another Bayern Meisterschale.

RB being non-50+1 club, most of us actually began gravitating towards Bayern and weren’t terribly disappointed when Julian Nagelsmann’s German Red Bulls officially fell by the wayside later in the spring. The current uncompetitive state of the Bundesliga owes much to the fact that Leipzig got completely gutted by Bayern personnel wise in the offseason. Given that few of us had any sympathy for this, there’s really no sense in moaning about it.

It may seem that we’ve gotten way off tangent here, but Hertha-Dortmund proved just that significant of a match. The capital city sides’s 3-2 victory the BVB laid bare what a brittle and unsteady structural mess Dortmund are. The hubris demonstrated by the team against perceived weak opponent, along with a serious quality level gap between Dortmund and Bayern, means most of us have lost sympathy.

At least that’s how we talk ourselves into still watching the league. One thing that still makes us cringe relates to the fact that only 5,000 spectators were able to witness this in person. A visit from Dortmund usually serves as one of three or four annual instances in which 75,000 live fans pack the Olympiastadion. Those times are in some respects more fun that the Pokal Finale in that all the supporters sing one song in chorus.

Unlike in Sinsheim, this BaWü club did a pretty good job of hiding its 750 allowed in spectators. The live fans were a little better tucked away out of the view of the cameras. The SCF had some dignity about it, not rubbing in the obviously unfair practices which shut out all but a hand-selected few. A football club such as this one understands that supporters aren’t meant to be used as props. That’s one reason we’re all grateful to see the Breisgauer in third place.

One final sell-out for die Geißböcke; the club which–it must be emphasized–hosted 50,000 fans for the big derby match three weeks ago. Whilst speaking to German footballing magazine Kicker yesterday, manager Alexander Wehrle trotted out the same point many German footballing administrators have been using throughout this pandemic. Namely, that scientific studies prove that football matches do not create local COVID hot spots.

We can add some context to this. Readers should be aware that there are no “scientific studies” about football matches in the truest sense of the word. Wehrle and others make it seem as if longitudinal research on the matter currently appear in peer-reviewed journals. This, obviously, is not the case.

What Wehrle, other executives, and indeed the DFL themselves are referring to when they speak of “hard evidence” concerns their own personal consultations with local health departments. After hosting large scale public events, the football clubs have measured public health data before and after the football match to see if the numbers spiked up.

They haven’t. We can show you that as well with our data. Naturally, this doesn’t meet any sort of true scientific threshold for proof. Only more qualified professionals with more rigorous and exacting standards can make that determination. That’s probably the best possible point to end our last attendance column for some time on. The scientists must always have the final word.