A third full color repost of a Bulinews attendance column very nearly gets us all caught up on the fan-scene report. We’ll get a full color of the round 17 attendance figures up after the New Year. 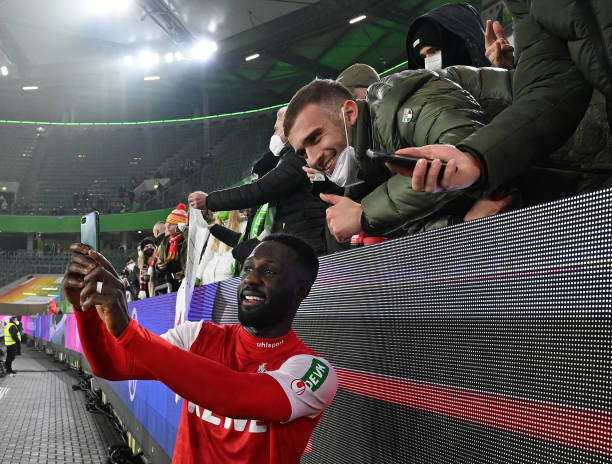 Back in the February 2020, the DFL’s corona hygiene concept consisted of banning selfies with players and coaches. That was it!

Flash forward to December 2021 and at least we’ve got our selfies back. Kingsley Schindler of 1. FC Köln delivered a fabulous “fuck off” to the social distancing rules last Tuesday away at Wolfsburg.

Good for him. It’s about time we broke up with this pandemic. Get those boosters and get over it!

The latest attendance column takes a look at both the numbers from the Bundesliga’s midweek “Englischer Woche” and takes a look ahead to the conclusion of the “Hin-runde” this coming weekend. Seven of the nine midweek Bundesliga hosting clubs were permitted to allow live spectators in. Of these seven, five sold their full allotment of tickets.

While Leverkusen and Gladbach didn’t draw the full allotment of spectators, Wolfsburg, Mainz, Bielefeld, Dortmund, and Union Berlin got every last pass into the hands of a fan. There will be more spectator less-ghost-games in round 17 as Bavaria, Saxony, and Baden-Württemberg are hosting a combined five fixtures. Four hosting locales are still permitted to let fans in.

Given that the final match before the Christmas break is usually a big draw, it’s conceivable that Eintracht Frankfurt, VfL Bochum, Hertha BSC, and 1. FC Köln will all sell out. All of the hosting locals are still allowed to operate under “2G” parameters, meaning that fans who are already either vaccinated or recovered do not need to obtain an additional negative PCR test in order to attend.

Most likely for the best that the hometown fans weren’t allowed in to watch their team lose in such a lopsided fashion on an embarrassingly beat up pitch. It looks as if the Baden-Württemberg regulations will remain in place far into the new calendar year. The state’s government is actually broadening restrictions in an area of the country where low vaccination and high incidence rates aren’t going in the right direction. BaWü clubs might be able to welcome fans again after the snow melts. 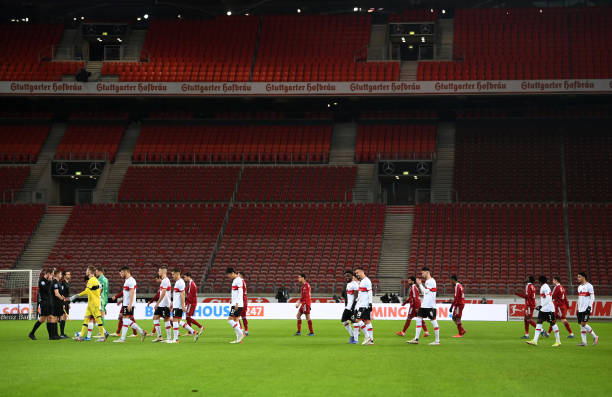 All tickets accounted for in the northern Autostadt, a locale at which the fans turned up but the team went missing. Plenty of whistles from the VfL supporters whilst watching their team go down to their sixth straight defeat. The trademark sense of humor possessed by this club’s ultras surely wanes a bit after numerous calls from management to come out and watch a bad team. We might see some lifting of restrictions in this state–still sparsely populated–come January. 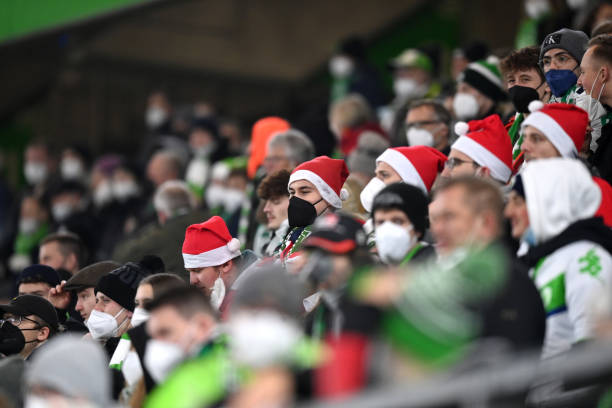 The Pfälzer ultras supplied us with easily the most charming stadium atmosphere of the entire midweek round, though it still came nowhere near as close to what these locals can offer under normal circumstances. Another big home win for the Rhenhessen. Bo Svensson’s Nullfünfter seema capable of feeding off the crowd more regularly than others. Support remains strong in the “kleine Domstadt”, where fans will continue to be allowed in. 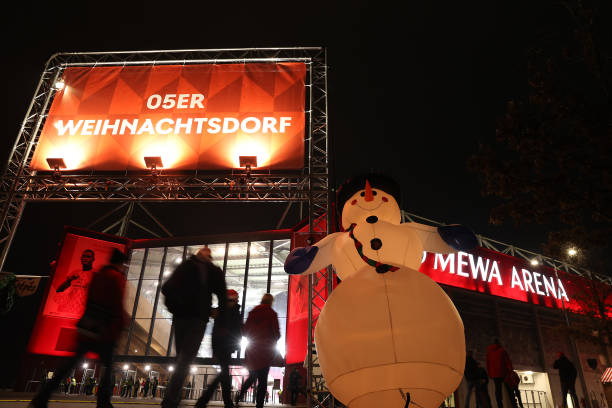 Nice. Somehow the DSC packed one hundred extra patrons in. Nothing to suggest that there was anything sneaky going on. Perhaps the club simply included the statistics for a few of the luxury suites in the rebuilt Alm. The fan acoustics here were also pretty solid, though loads of lulls on the pitch predictably put some of the supporter sections to sleep. Local at this one at least got a chance to see their team achieve their second win of the season. 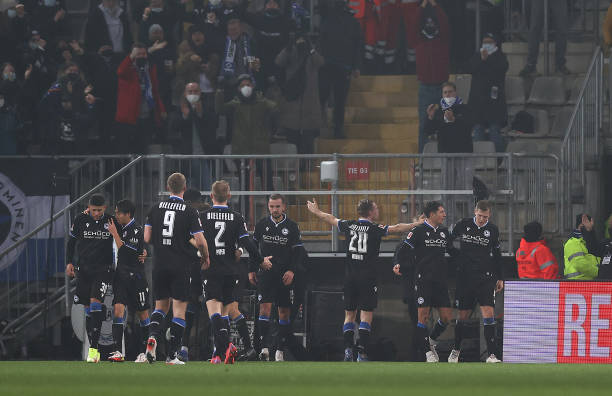 One beheld an eerie quiet throughout much of the proceedings during our selected game of the week. Glabach’s strict adherence to a checker-board seating pattern lends itself better to family groups than ultra and/or fan percussion sections. It’s been a rough year for this fan base. The team’s performance during the second half of last season and this campaign’s Hin-runde has been pretty lousy. The team keeps losing and fans feel their voices constrained amid of the late-pandemic restrictions. 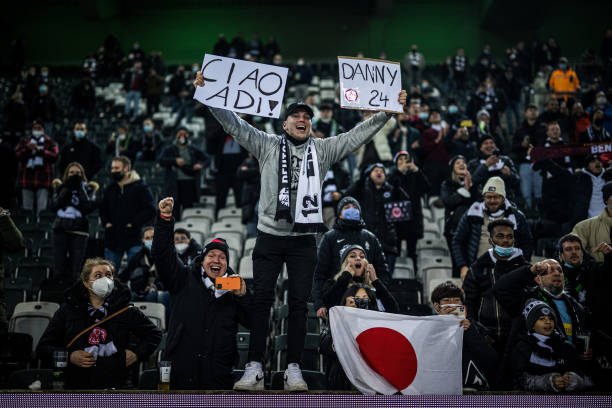 The atmosphere seemed fairly stifled at the other Borussia as well. Team and fans alike remained tense throughout most of this match, with both finally letting loose when the late goals came. A second Christmas without a Signal Iduna fan concert left us all feeling a bit deprived. Hans-Joachim Watzke’s fears that Christmas would be cancelled again proved true. At least the NRW clubs will have some support to fall back upon in the coming months. 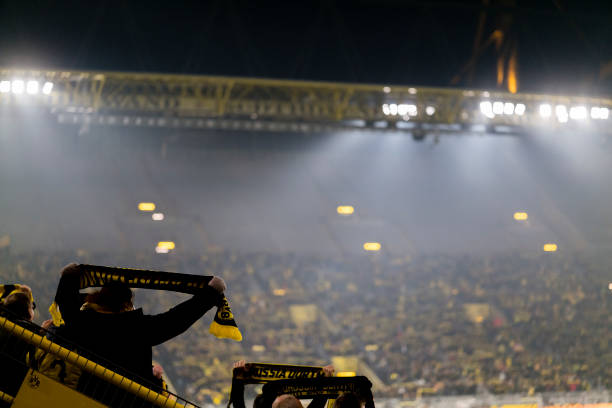 Excellent vocal support from the fans in attendance at the BayArena, who kept it going throughout this edge-of-one’s seat encounter. The company town team didn’t get the full draw here after what’s some understandable footballing (and wallet) fatigue following the Europa League fixtures. Capacity crowds should be back after the new year.

Another very small crowd that made every set of vocal chords count. They’re always up for it in Köpenick; one of the prides of the current Bundesliga field. Just like with Dortmund, we all have to contend with two Christmases without a supporter concert. For both the FCU and BVB, the end of the calendar year yet to begin can’t get here soon enough. 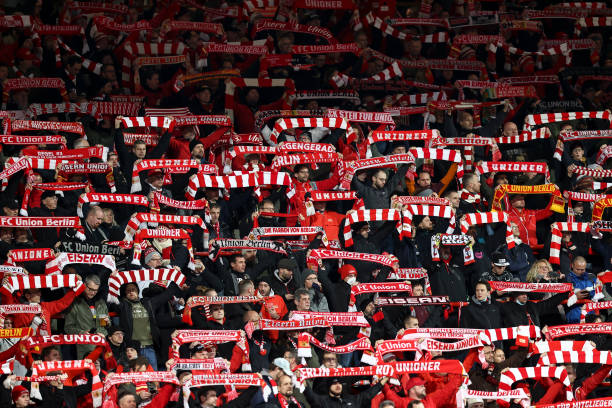 Still no fans in Bavaria. One can nevertheless report the decline in local incidence rates in this part of the country continues to be most impressive. Not so long ago we were concerned about it reaching into the thousands. Incredibly, its sunk back into the hundreds. State governor Markus Söder’s roll back of the “2G+” regulations caught us all off guard, but most remain skeptical that he’ll have any other surprises in store for us. Doubtful we’ll see fans here until March.

We now arrive at the final round of top flight German football in the calendar year of 2021. New Year’s generally accords people the chance to look back. In this case, one might as well emphasize a harsh truth about where we were some 12 months ago. Far too many declared themselves happy to see the back of 2020, perhaps forgetting the that problems of a multi-year public health challenge were not set to disappear simply because the calendar flipped over.

Certain matters call attention to the arbitrary nature of cleaved up units of time. The calendar year of 2021 offered up proof of this. A pandemic does not disappear with the snap of a finger. It did not do so this year, despite the fact that inoculations against the novel virus were refined over 13 months ago and distributed in December of 2020. One full calendar year of jabs into arms made only a dent in the problem. The issue shall not go away this year either. That’s the reality. 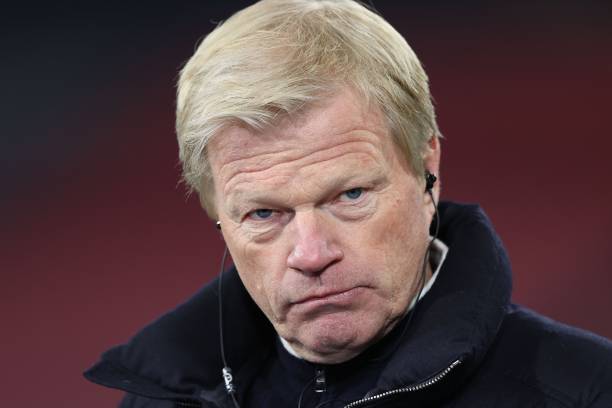 As everyone digs deep into a depleted reservoir of patience, there can still be some hope of a re-classification before the next year is out. COVID and its variants shall persist, but there’s plenty of evidence that the “pandemic” can be downgraded to an “endemic” by the end of 2022 if not sooner. The statistics we discuss in this column may slowly give way to a much happier and joyful focus. Namely, the most colorful and entertaining football fans the entire world over.

With that sliver of hope in mind, we’ll turn to this weekend’s fixtures.

No choice but to begin with something of a downer. The German giants look to score plenty of goals in this one, which means we’ll have to hear the obnoxious “can-can” ring out possibly six or more times through the empty Allianz Arena. Such an occurrence will always serve as a reminder of how low things got during the global pandemic. Thank goodness the end is in sight.

On the topic of cloying music echoing through an empty footballing cathedral, RB’s “Gladiator” pre-match theme gets to be the star of the show. If this state can’t get its vaccination rate up, this might prove the reality well into next spring. At least Leipzig has the dignity to, like most Bundesliga clubs, turn their venue into a vaccination center over the holidays.

Die Adler proudly still offer tickets for this one and also set an allotment of 15,000 passes on sale for the round 18 encounter with Dortmund today. There’s no more stopping the SGE from letting live spectators in. After the club outfought local authorities last autumn, the club of the country’s commercial capital can proceed as it pleases within federal guidelines. Some match this should be too. It would surprise if it didn’t sell-out. 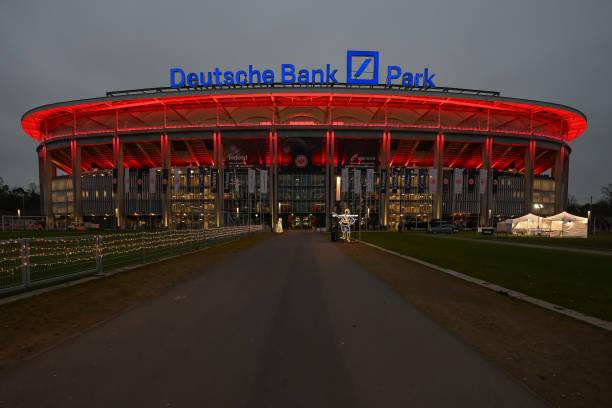 Local metrics still prove unstable in the Rhein-Neckar district. Most of Baden-Württemberg–because of the low vaccination rates–remains at red-levels. As if any German football fan needs a reminder, the matter of live spectators in Sinsheim barely registers as something relevant. Matches here are quiet whether fans are allowed in or not. 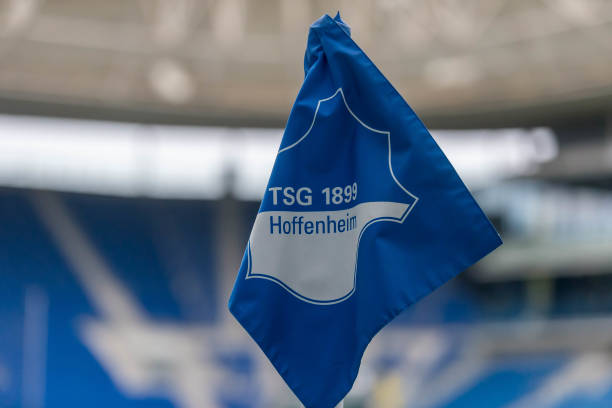 The 1848ers no longer offer any tickets for this matchday on their website. A sell-out can’t be absolutely confirmed, but it would make perfect sense for this town and team. The Christmas football fixture stands as one of the year’s most important events in the Ruhr. Every last seat should be filled for another great matchday 17 offering. 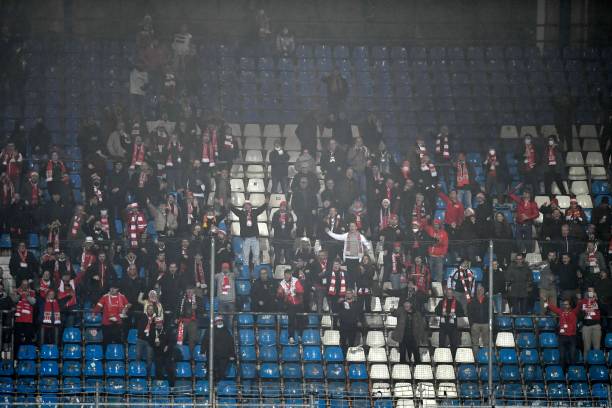 Metrics in the Franconian sections of Bavaria aren’t going down in the same way that they are in more densely populated regions of the south. Fürth and neighbors Nürnberg still have to deal with fluctuating incidence and hospitalization rates. This could be one of the last areas of the state to clear. Hopefully, unlike in round 15, Kleeblatt supporters will get a chance to see their team win at home before the stay in the top flight ends.

Tickets are no longer available for this one in the country’s capital. Some 60,000 or more would ordinarily attend the Dortmund visit in normal times. A full Olympiastadion crowd is really a sight to behold. Fingers crossed that we’ll be out of the tweeds in time to get one for the Pokal Finale this year. That can actually be a reasonable expectation. 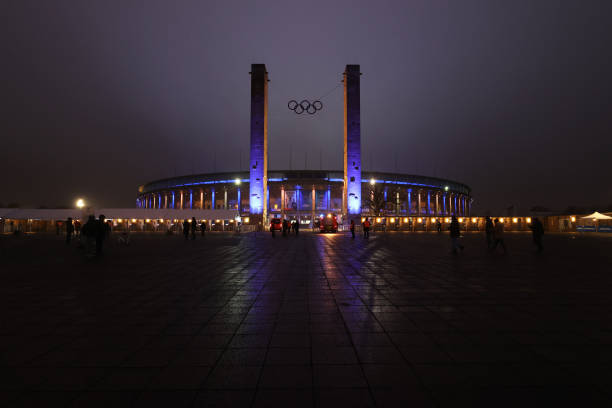 Another fabulous fixture that everyone will have to watch from a distance. One simply has to take solace in the fact that the scenes from the Dreisam farewell in the Schwarzwald still burn brightly. There shall be brighter times ahead this spring, quite possibly a Europe-clinching match in front of the SCF ultras. One can look forward to that too.

No more tickets available at the RheinEnergieStadion, though its never too late to show up to the stadium for a free vaccine/booster shot. The manner in which Köln as a club has taken the lead on this public health issue–not to mention last summer’s flood relief efforts–provides an example of German football’s positive influence as a community and civic institution. We’re all so pleased that die Geißböcke look set for a secure stay in the top flight. 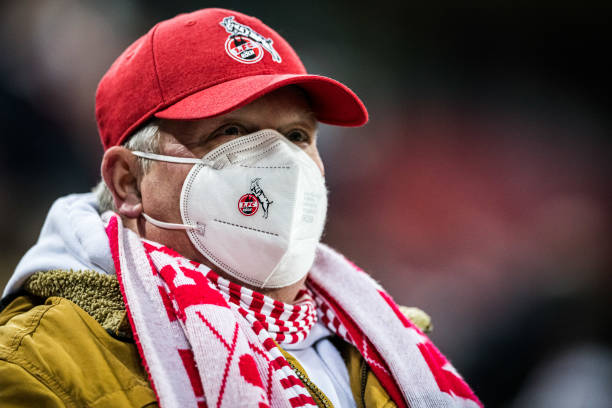