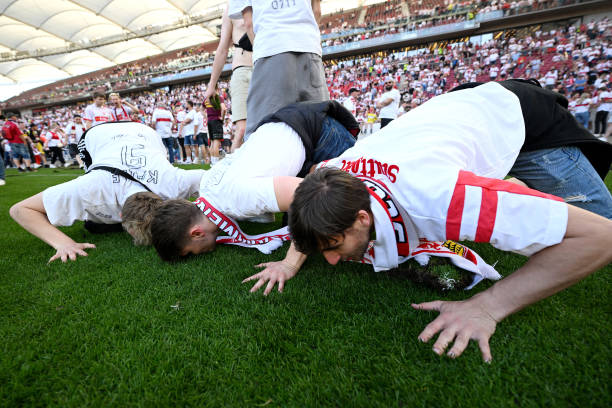 Our next re-post combines the matchday 34 primer article with the round 34 attendance figures article published some five days later. 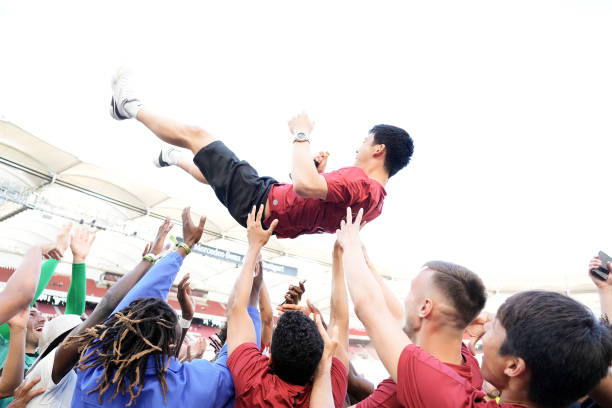 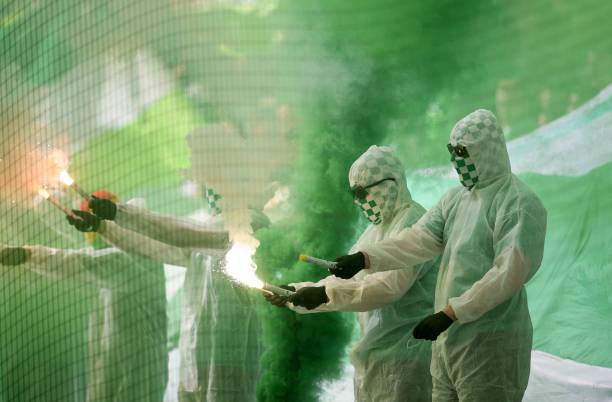 Fans of simultaneous kickoffs (still disappointed that they no longer occur the Bundesliga’s penultimate round) get what they want this weekend as the 2021/22 German Bundesliga campaign draws to a close. Still at stake, we have the Champions’, Europa, and Conference League places of four clubs. Arithmetically speaking, three teams are still fighting for survival. 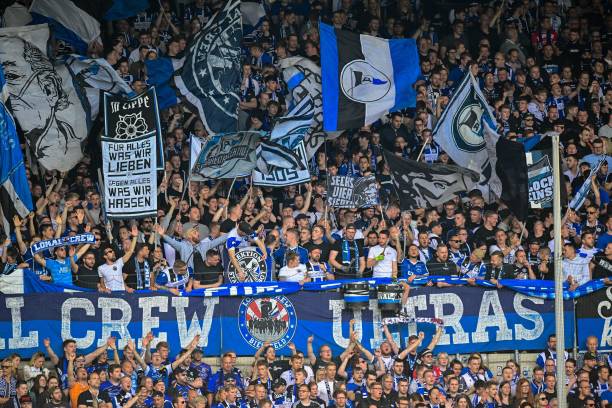 Stuttgart, Leverkusen, and Union Berlin have already sold out their fixtures heading into the season’s final round. Wolfsburg comes close to a full house. The remaining five hosting locales–Dortmund, Gladbach, Mainz, Augsburg, and Bielefeld–all still have passes available on public sale. Should be a fine May day to visit the footballing cathedrals of the Bundesrepublik! 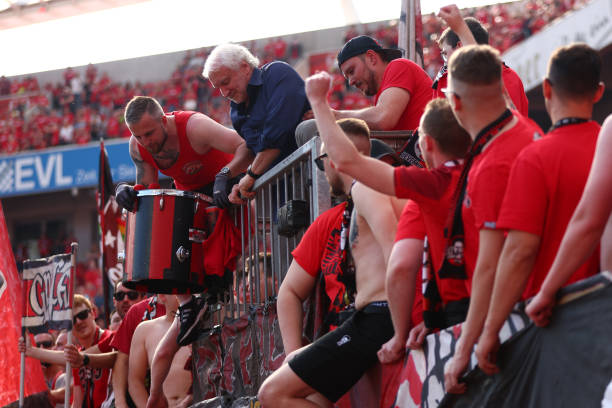 The supporters were out in full force for the 2021/22 German Bundesliga’s thrilling conclusion. Four of the nine fixtures (Wolfsburg, Leverkusen, Mainz and Union Berlin) ended up selling out. Dortmund, Stuttgart, Augsburg and Leverkusen topped 90 percent. Only relegated Bielefeld fell into 80-percent territory. 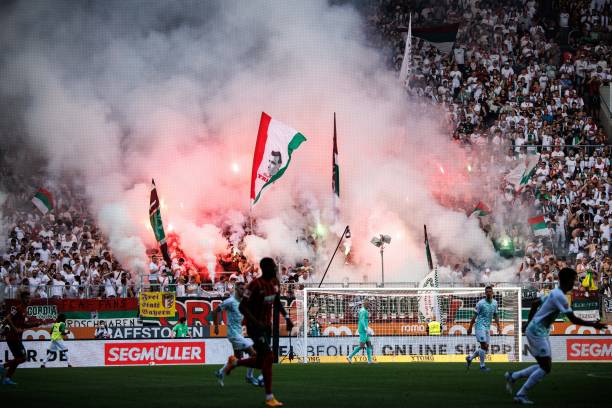 Attendance figures, of course, don’t tell much of a story when it comes to what really transpired inside the stadium. That’s what this Bulinews feature is for! We’re overjoyed to furnish one last look inside all nine hosting venues in the final installment of our weekend fans column!

A massive match for Berlin’s “alte Dame”, whom could slip to the relegation playoff place on this day. The outcome was unthinkable to most of us league watchers even a few weeks ago. Hertha squandered a considerably easy path to safety away. Those of us who made the customary “February Promise” currently chew our fingernails off. 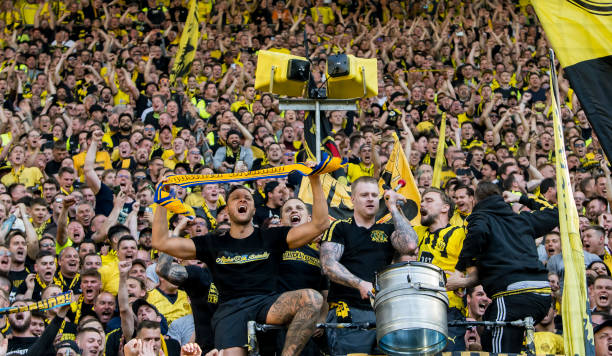 There are still seats available at Signal Iduna for anyone wishing to check out Erling Haaland’s farewell. A couple thousand passes remain up for grabs on public sale via the club’s website. Marco Rose plans on deploying his best lineup. While there will be some commemorations for departing players like Roman Bürki and Marcel Schmelzer, Rose doesn’t want to risk injury to actors not used in a while.

A few seats short of a sell-out over at Signal Iduna in the game that saved VfB Stuttgart’s relegation bacon. A shame to think that an additional 865 in-house patrons could have been on hand to witness the pre-match choreos for club legends Marcel Schmelzer and Michael Zorc. 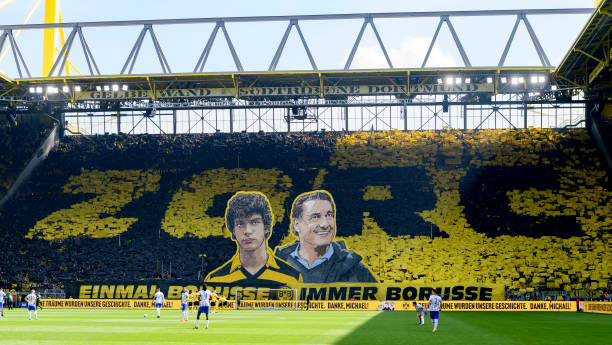 All the departing players from Axel Witsel to Roman Bürki got the full floral assortments. 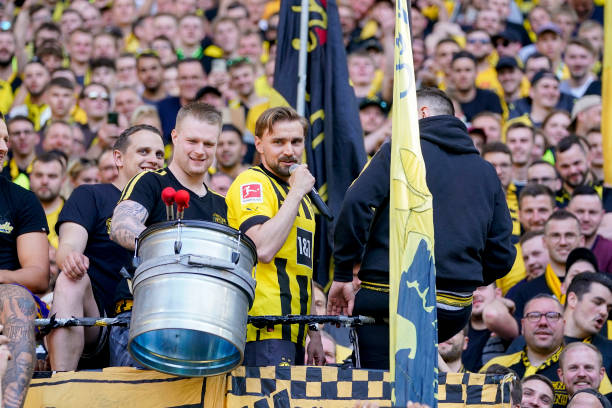 Not much space available in the Volkswagen Arena for what looks to be a rare VfL sell-out. The German giants are in town for the final home game of the season. Even if there’s nothing at stake, the turnout should be strong. Tickets remain on public sale in the “Autostadt”. 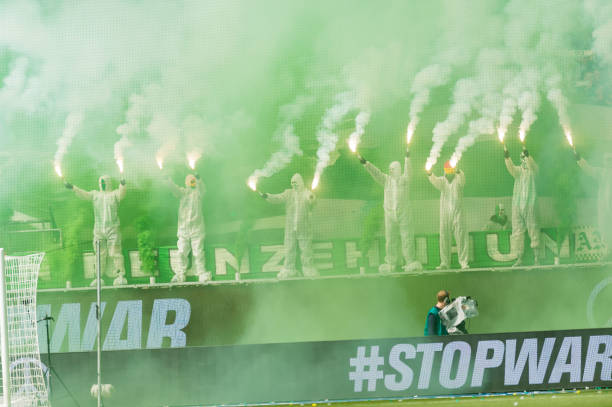 A rare sell out at the Volkswagen Arena for the season finale. Great atmosphere from the often unappreciated VfL ultras. A very nice farewell for the eternally under-appreciated John Anthony Brooks. No flowers or collage posters for head-coach Florian Kohfeldt, unfortunately. Just a pink slip on Sunday morning. 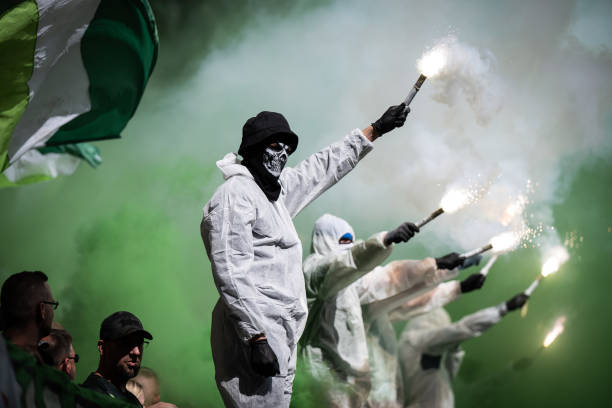 One never knows when they’ll take away the parking pass and change the locks.

Not exactly the “final” many of the Freiburg players were hoping for. Unless something very surprising happens in Bielefeld, a win for the visiting Breisguaer won’t be sufficient to take the final Champions’ League spot. 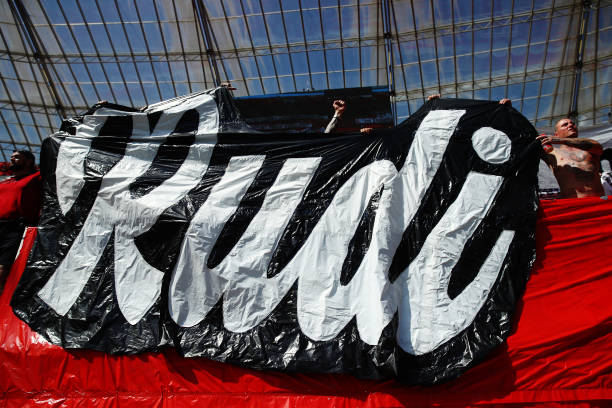 Along with Michael Zorc, we sent two legendary German footballing personalities into retirement on Saturday. Our beloved “Tante Käthe” is headed for the rocking chair. Best wishes for a life of breezy beach reading to World Cup Winner and former German national team head-coach Rudi Völler! 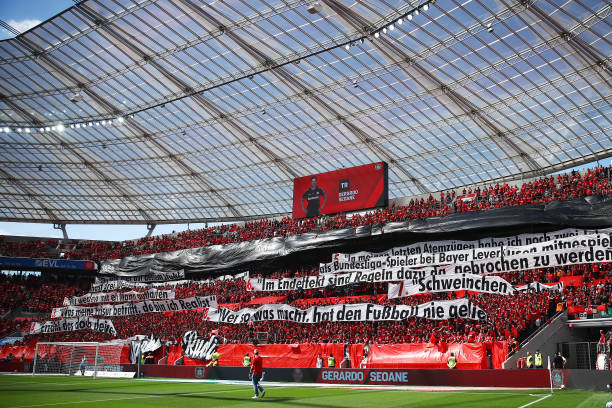 Astounding choreo from the B04 ultras, packing in all the best quotes from “Herr Scheiß-Käse” over the years after they unveiled two full Kurve banners. 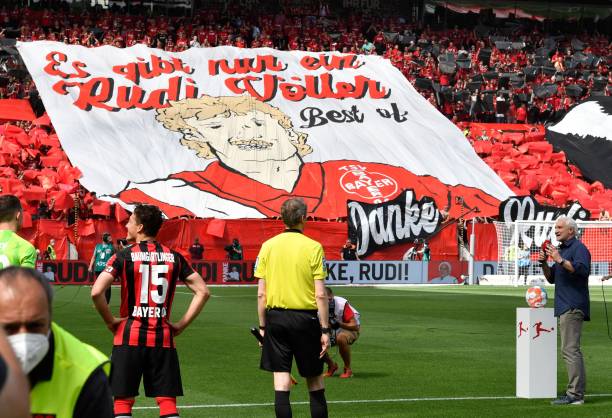 Tributes for the departing Julian Baumgartlinger were also top notch.

Effectively zero chance at getting access at the Stadion An der Alten Försterei, not even on the secondary exchanges. Few season ticket holders shall wish to pass up on the chance to celebrate the team’s European qualification, particularly after only two thousand live spectators were allowed the privilege last year.

Die Eisernen will keep the stadium open later on through the evening for celebrations and there should be a little rally in Köpenick on Saturday night. One actually doesn’t need tickets to enjoy a Saturday afternoon in this East Berlin quarter. The party shall go on deep into the night. 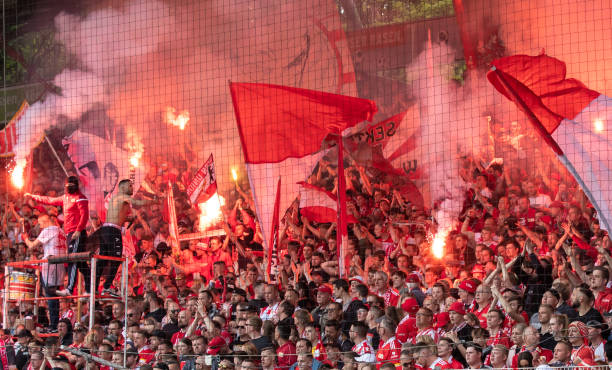 Union win on this day whether it’s Conference or Europa League.

Fifth place in the table for the great Nina Hagen “cult club”. Welcome to the Europa League, Eisernen! As promised by the club, the party spilled out of the stadium and onto the streets. Why, oh, why did Grischa Prömel decide to go back to Sinsheim?  They don’t party like this down that way: 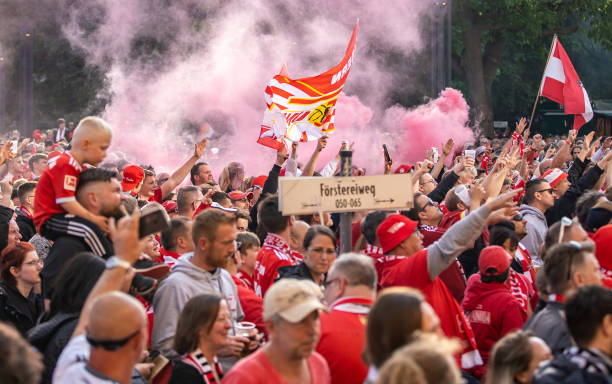 Very possibly the last match in charge of the foals for Adi Hütter. One of the most expensive misunderstandings in the history of German football. Caverns of space still free in Borussia Park for this classic “golden pineapple” affair.

The ultras will still be collecting donations for Ukrainian refugee causes as part of the club’s continuing effort to raise money after Wednesday’s exhibition fixture. Perhaps Hütter should donate a portion of the €3 million annual salary he collected this year. 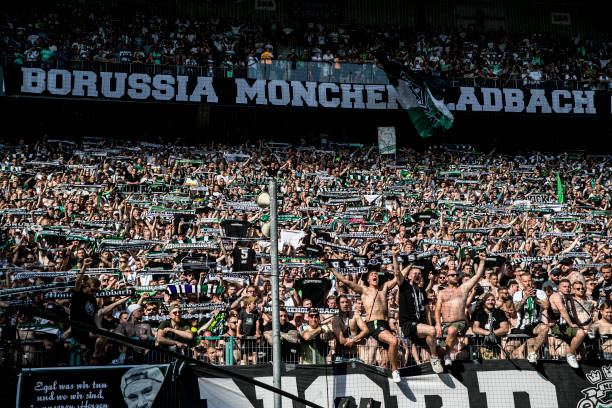 A surprisingly good turnout at Borussia Park for a surprise 6-1 home victory for the Fohlenelf. The atmosphere proved a little tepid. Not a great send-off for Matthias Ginter after the German national team defender got in some hot water with club management over recent comments. 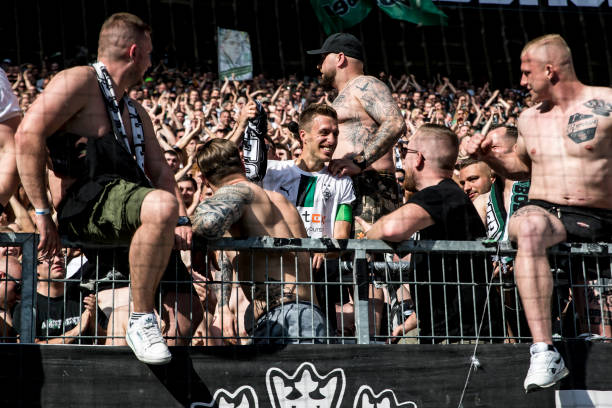 It was okay. More of a day for subdued exits in West Prussia. Tough last two years for BMG fans. At least they turned out with flags in force.

Every last voice in the “Cannstatter Kurve” will be lost on Saturday afternoon as the VfB loyalists scream down the house for their players. So many league Bundesliga enthusiasts subconsciously root for the sensation. One can recognize this by our thinly-veiled attempts to talk ourselves into it.

Will it happen for the Swabians on the season’s last day? The club they’re facing beat their way out of the pressure box on the final matchday of the previous campaign. Alas, that was a very different situation. 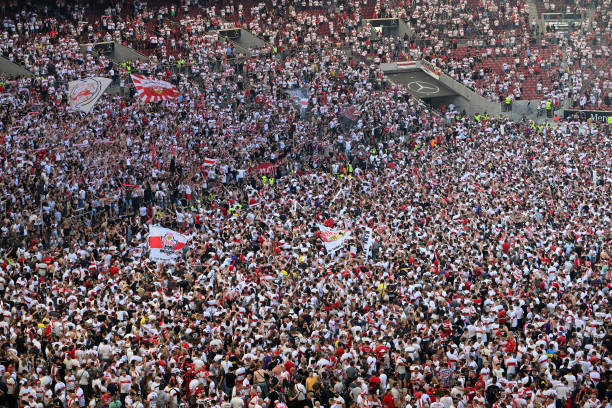 Something tells us league watchers that the Hertha and Stuttgart scorelines from the “Hin-runde” could repeat. In any event, a sold out crowd will try to flip the script.

Despite the fact that the club claimed they had a full house, the gate attendance figures suggested otherwise. Oh well. Whoever remained in the parking lot missed out the greatest footballing party German football had seen in three years. Scenes almost too beautiful to describe.

Did it really happen? Was it all a dream? 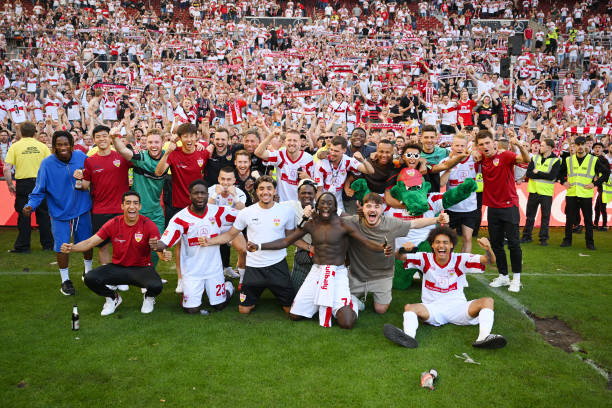 Nope. This was all real. 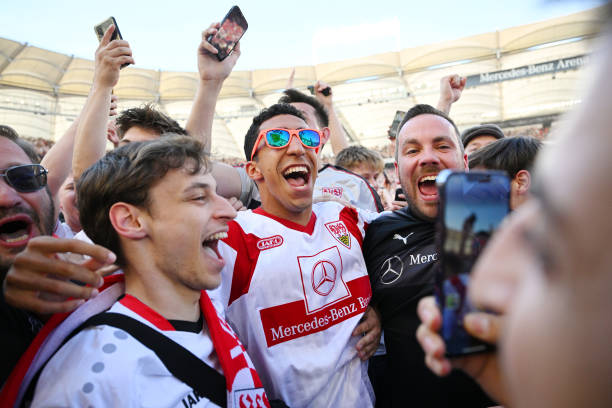 A farewell to Daniel Brosinki. A fan fest around the MEWE Arena. These are a few of the things planned in the Pfälzer capital for the season finale. A few thousand tickets remain for those wishing to pay a visit to the Palatinate’s carnival club square off against Oliver Glasner’s geriatric “B squad”. 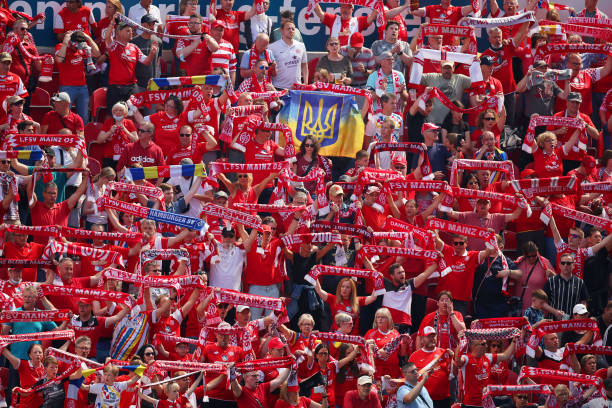 Sometimes the columnist forgets the new upped capacity at the MEWE Arena. The locals, on the other hand, didn’t forget to show up. The Nullfünfter also didn’t forget to give every last one of their departing players. The scenes for Karlsruhe’s Daniel Brosinski were by far the best. 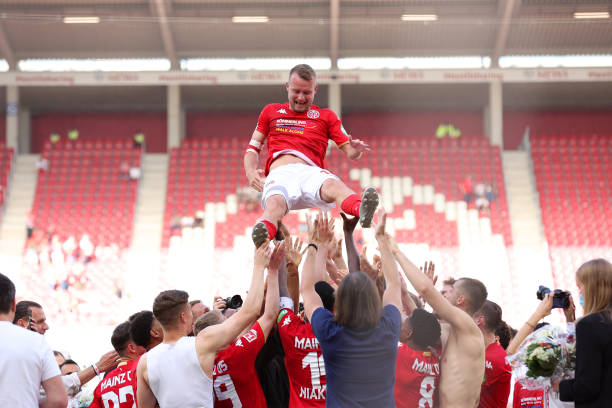 With safety secured, maybe some of the Fuggerstädter faithful feel a little disinterested, not to mention a little burned after the team’s last home fixture. For such reasons, the WWK Arena isn’t anywhere near full for this Bavarian derby.

Passes on public sale for anyone who wants them. 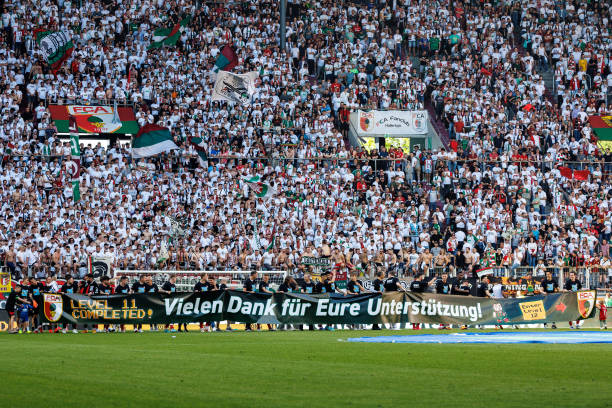 By German footballing fan standards, there wasn’t much special going on at the WWK on Saturday. Naturally, that doesn’t mean the atmosphere wasn’t fantastic. The Kurve did a great job of keeping up the chants throughout. It merely counted as par for the course. 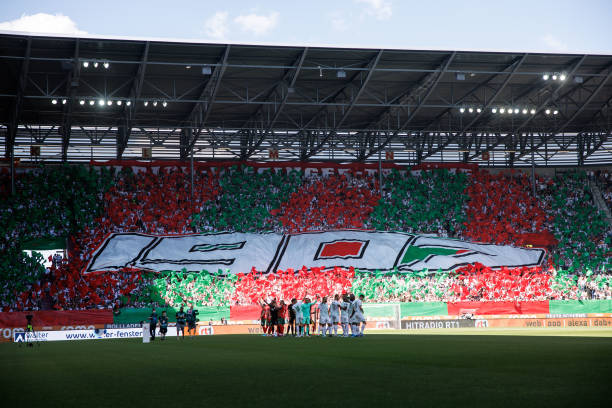 Whoever came up with this is just plain damned awesome.

No farewell for club legend Fabian Klos at the Alm after all. That’s really something! If the Teutoburgs can manage to reverse a seven-goal-differential with Stuttgart and somehow climb up to the relegation playoff place, that would be something so incredible that it qualifies as a miracle. 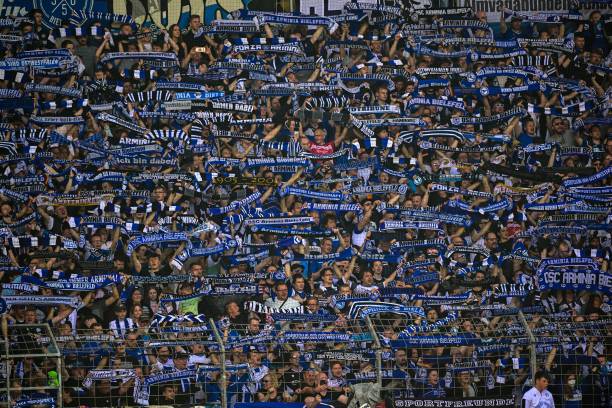 Even the diehard fans know as much. That’s why there’s no shortage of tickets remaining on public sale. If you happen to believe that Bielefeld exists and happen to be there, the DSC door is open.

Even though there might not have been many other options available in Bielefeld on a Saturday afternoon, many of the locals couldn’t bare to watch the inevitable relegation. DSC supporters have seen enough of them. Six relegations in the last 25 years to be precise. 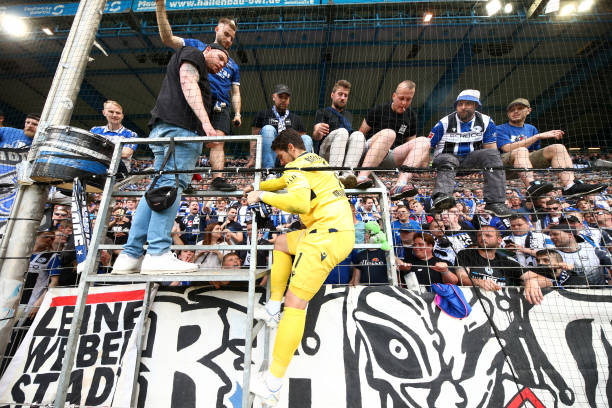 It came to a respectable end at least.