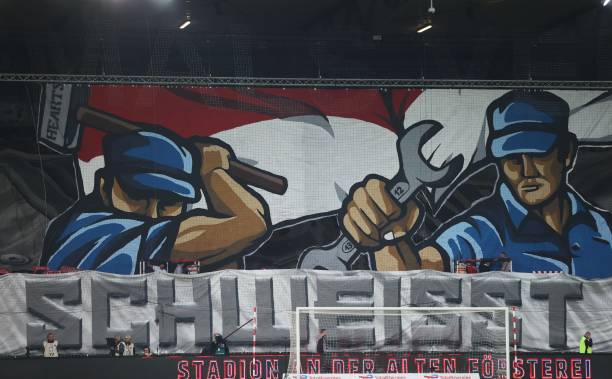 Our next re-post combines the matchday 32 primer article with the round 32 attendance figures article published some seven days later. 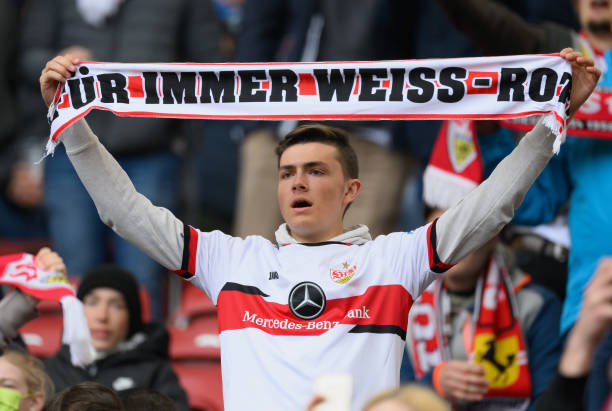 Some football-related storylines begin to evaporate as the 2021/22 German Bundesliga campaign draws to a close. Stories associated with the greatest fan-beat in all of football nevertheless continue to flourish. Ahead of a Bundesliga round set to span four days, three of nine fixtures are already sold out. 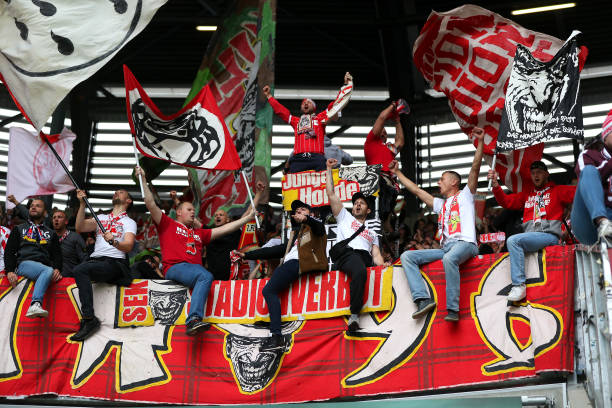 Mainz, Dortmund, and Union Berlin will play in front of full houses. It’s very likely that Bielefeld shall too. As always, tickets remain available via club-sanctioned secondary exchanges even for the games without direct passes on sale. 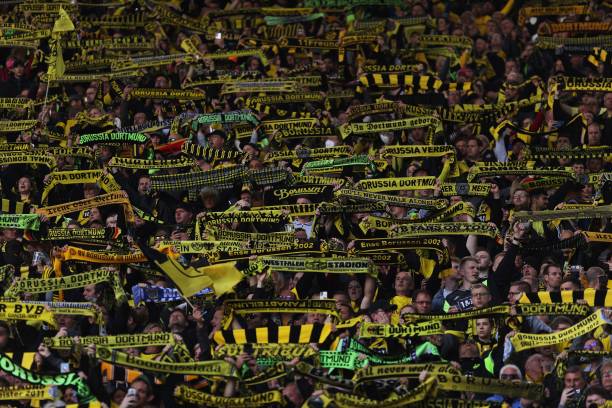 As was the case a few rounds back, our look back at previous Bundesliga attendance figures arrives on the same day as our look ahead at the week to come. With Eintracht Frankfurt’s home venue racking and swaying as it was last night, every last chance to build-in the fever pitch state of the SGE supporters had to be taken. 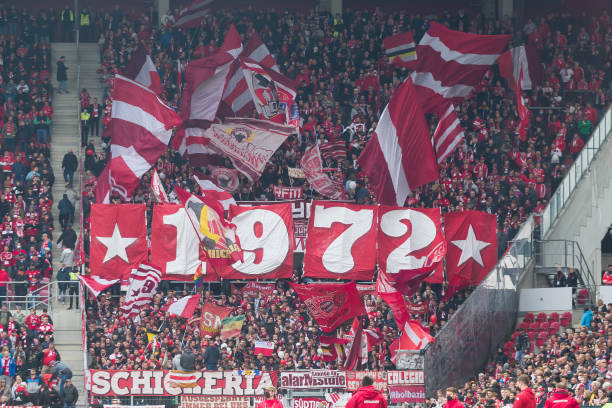 Three of the nine Bundesliga fixtures (Union Berlin, Dortmund, and Mainz) in round 32 of the 2021/22 German Bundesliga campaign sold out. Stuttgart, Augsburg, and Bielefeld came very close with numbers above 90 percent. As feared, there was less interest in the two delayed Monday fixtures. Leverkusen and Gladbach had trouble filling the seats. 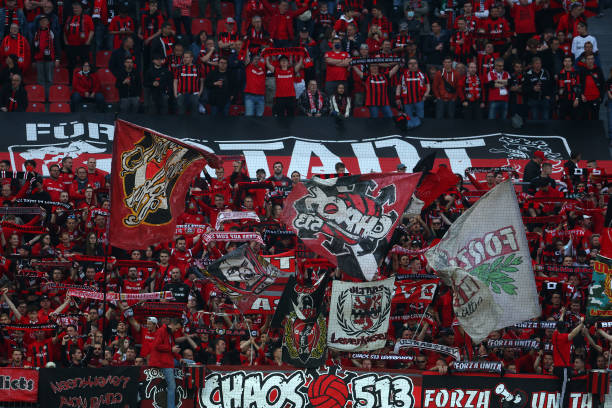 Over at the PreZero Arena in Sinsheim many live spectators missed out on the best game of the weekend.

The Stadion An der Alten Försterei is already sold out for a fixture that should give the home Köpenick crowd plenty of joy. Die Eisernen look to beat up on a relegated team in total disarray. Should anyone in the capital wish to visit the FCU venue this evening, there remain tickets available on the club sanctioned secondary exchange. 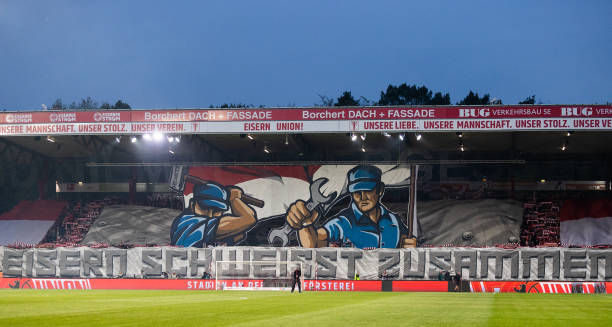 Not exactly what the Union fans were accustomed to seeing last Friday night under the lights. The atmosphere succumbed to tension and concern at times. At least we know that, barring some kind of unforeseen meltdown, these supporters will get European football next season! 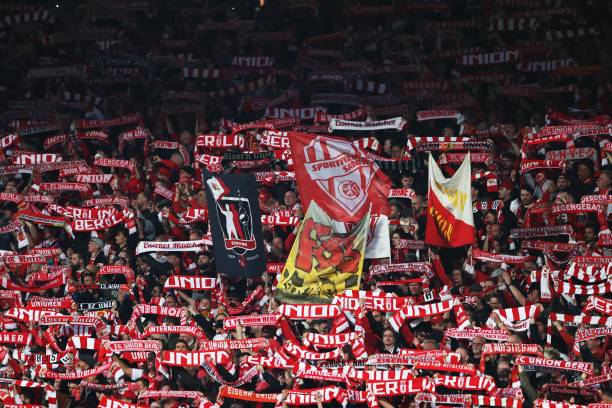 One way or another, all clear for more of this next year at the “Oly!”

Nothing to play for other than the home crowd for the die Schwarzgelben, who will still wish to please the packed stands and avenge their disappointing draw in this season’s “Hin-Runde”. Signal Iduna is sold out for one of German football’s smaller “Revierderbys”. Bochum-Dortmund certainly isn’t Schalke-Dortmund, but it’s nevertheless always fun.

Tickets can still be secured via the secondary exchanges on the BVB’s website. 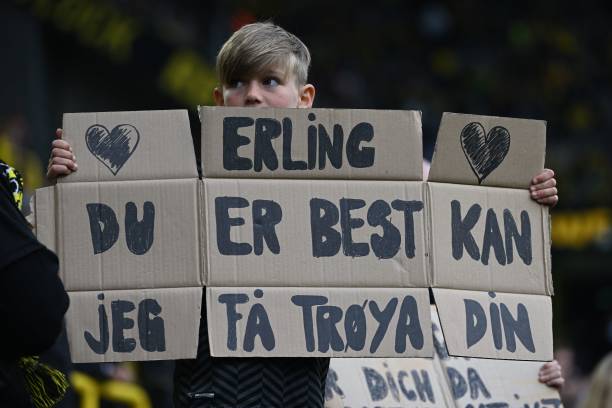 A Signal-Iduna sell-out didn’t get a chance to see their side win. In point of fact, they watched Bochum prevail in one of the “kleiner Revierderbys” for the first time in some 25 years. BVB boosters in attendance also got a sneak peak at a brighter future in the form of some exciting moves delivered by English phenom Jamie Bynoe-Gittens.

Mostly, however, all anyone seems to want to talk about concerns how eager supporters of this club are to get this season over with. Conclude the chapter. Turn the page. Get an Erling Haaland doing little other than trying to avoid injury off the roster. Out with the old. In with the new. 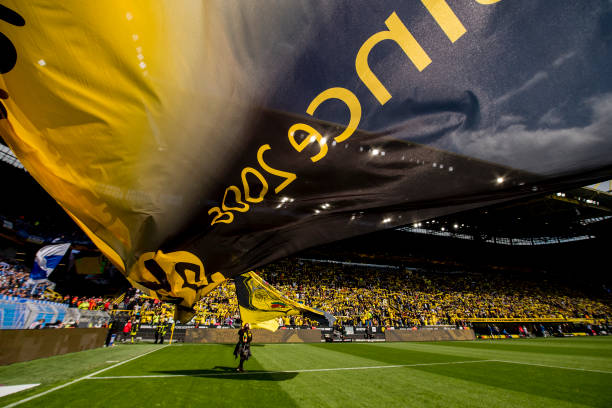 Some 50,000 tickets already sold for a fixture many of the local supporters understandably have a bad feeling about. The Swabians remain in terrible form. Some boosters in the BaWü capital are already saving their money for the relegation playoffs. That leaves plenty of space for those interested in attending on Saturday.

A trip to the Mercedes Benz Arena is defensively worth it if only to check out the “Cannstatter Kurve”. So very nice to see it back in action. Rest assured that the VfB ultras have been working all week on some great pre-match choreo. An enormous banner will cover the entire tribune. 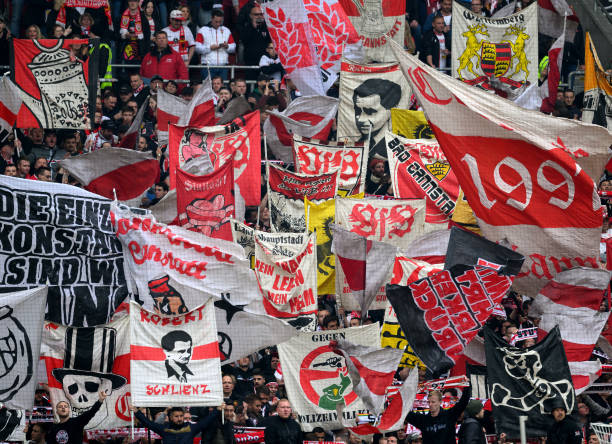 The relegation-threatened Swabians got a brief reprieve from all the stress associated with their imminent drop. A late equalizer enabled VfB players to pay a cordial visit to the “Cannstatter Kurve” after this one was done and dusted. An appreciative round of applause certainly beat the disapproving jeers and whistles they had to face in the previous round following a horrible performance away at Hertha.

This club looks set to lean heavily on its fans through what will be a very difficult task in the relegation playoffs. Every last voice in the BaWü capital counts. It looks like there shall be two more home fixtures at the Mercedes Benz Arena.

The Pfälzer look forward to a “Voller Hütte” against the German record champions. Ideally, they wouldn’t mind a significantly better performance than last week either. The always passionate Mainzer fan-base can likely look forward to a competitive affair. 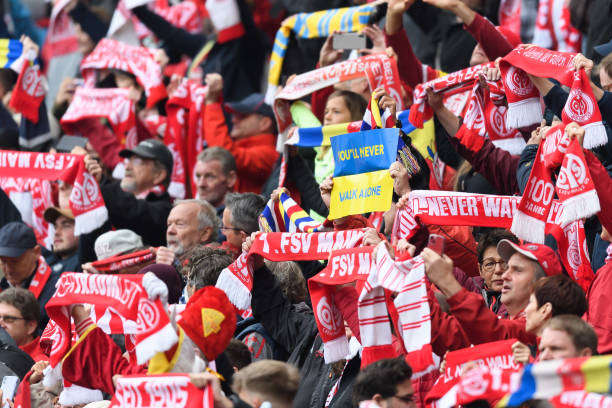 Their tenth consecutive Meisterschale clinched, Bayern appear set to rest some of their stars. Mainz also beat the mighty Bavarians the last time they hosted them last spring. Goals from Robin Quaison and Jonathan Burkhardt sealed a 2-1 victory of Hansi Flick’s FCB in round 31 of the 2020/21 campaign.

Nicely delivered from the Pfälzer. Barely a year removed from the “great escape”, it’s a stable mid-table finish and a second straight home defeat of FC Bayern München for Bo Svensson’s Rheinhessen. Few images beat the Mainzer visited to their FanKurve after a home victory. 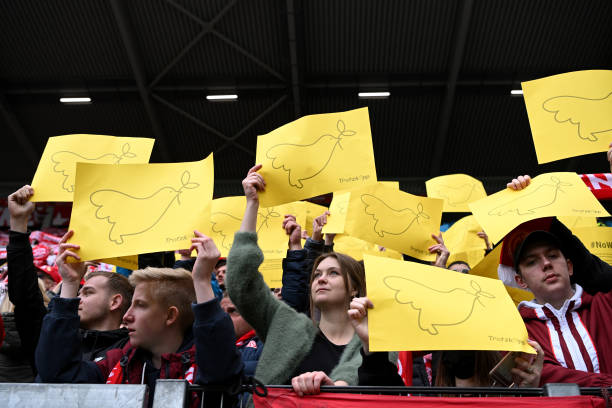 In the case of some clubs, it’s mere a matter of bows and applause. Not so in Mainz. Bullhorns, microphones, and joint cheers. Always.

A win ensures class preservation for the Fuggerstädter. Somewhat surprised to see so many thousands of tickets still available on the club’s website for such a crucial match. Should the FCA best Köln–just as they did in the Hin-Runde fixture–there shall be quite the party at the WWK-Arena.

Perhaps fans of the Bavarian Swabians feel somewhat pessimistic after years of watching Bundesliga football being secured via outside means. Köln also roll into town in fantastic form and are the clear favorites. Oh well. Plenty of space available for anyone near the Swabian section of Bavaria. 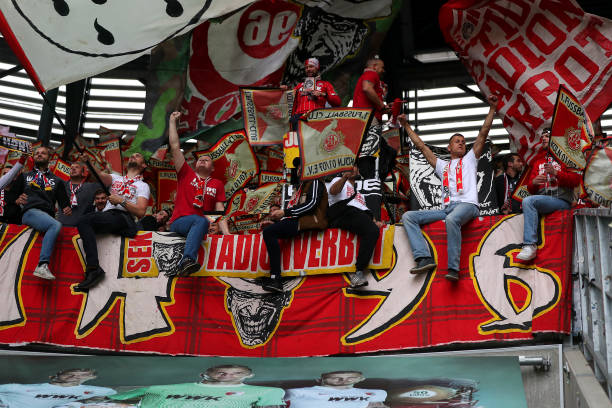 Big disappointment for the Fuggerstädter faithful, who had to digest a lopsided loss on Plärrer weekend of all times. Celebrations had to be postponed, or at least moved to the nearest “Volksfestival Tent”. For some of the Bavarian Swabians turning out, a back-up plan ensured that their weekend wasn’t totally ruined.

A few seats still available at the Alm for a nerve-wracking match that could well cut Bielefeld adrift from safety. Having already secured victories against relegation rivals Augsburg and Stuttgart, Hertha are widely expected to finish the job against an Arminia side coached by an interim trainer and potentially dragged down by a chronically-depressed keeper. 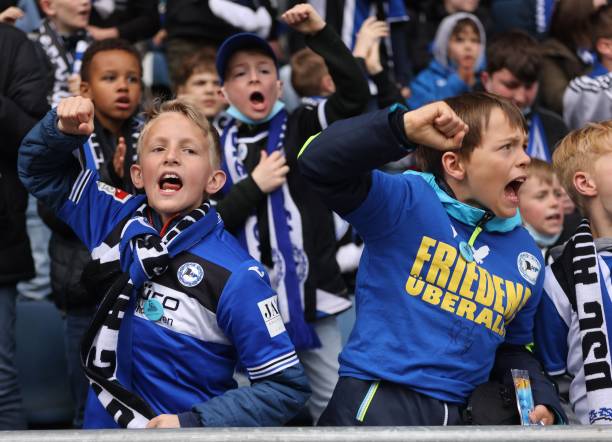 Local supporters seem up for the task, snatching up all but a handful of passes. The DSC fans shall pack the stadium and scream the house down for the players in the hopes of turning the tide. Perhaps we’ll witness some wrenching of the relegation race. There’s sure to be great scenes if we do.

Quiet and pensive at the old Alm until Joakim Nilsson’s late equalizer took the roof off the place. Despite the fact that relegation increasingly appears to be a certainty, the DSC doubles down on its revived “No one conquers the Teutoburg Forest” campaign. 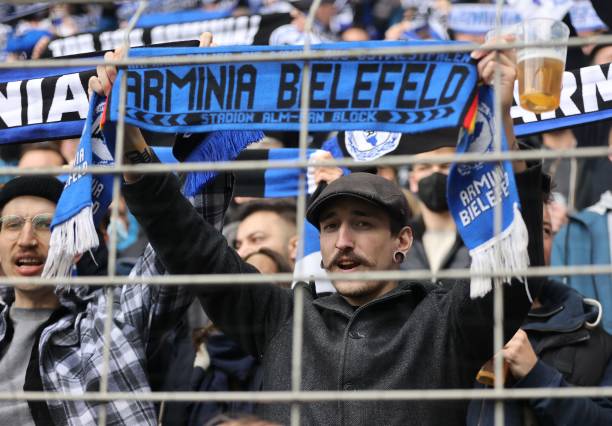 Those “treetop tricots” the team dressed in are unquestionably spiffy. Of course, so were those “Gelsenkirchen roadmap” jerseys Schalke trotted out last year. It didn’t make a difference.

It’s the un-official “Badische Derby”! The Kraichgauer host the Breisgauer. German football fans honestly wish there truly was something of a rivalry at work here. Alas, there really isn’t. The TSG remains too young of a club and virtually all neutrals will be supporting Freiburg.

The atmosphere inside the PreZero shall be dominated by Freiburg support as well. As always, there are thousands of tickets still available in Dietmar Hopp’s Sinsheim Palace. Pin-drop silence in the Rhein-Neckar. Regrettably business as usual for this club. 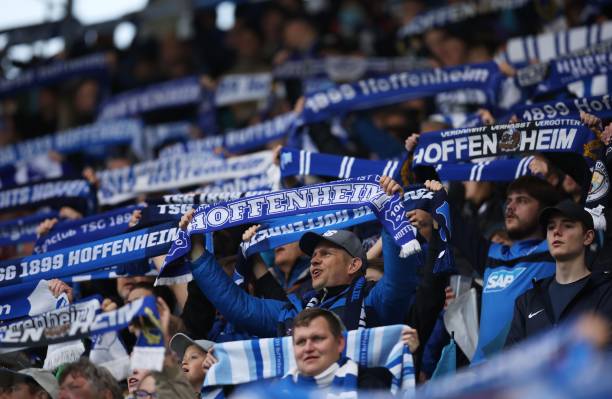 The fixture selected for the “match-of-the-week” feature in our Tactics Talk Column also had a few things to say about the state of footballing fandom in Sinsheim. Care to have a look at how those cheaply-manufactured flags were?

Try cloth instead of plastic next time, Kumpels. A cub accused of being “plastic” has no business proving everyone right with synthetic support tools. 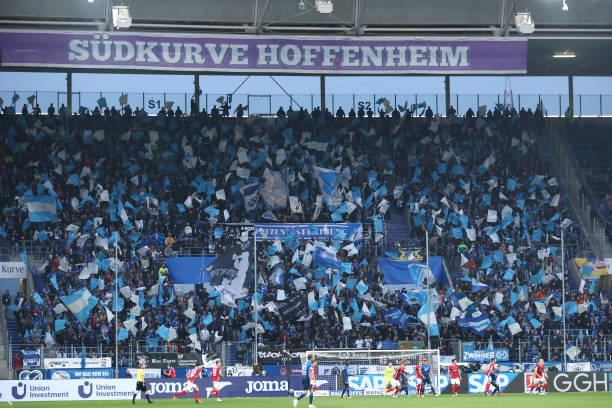 An interesting Bundesliga matchday as, after a Sunday free of fixtures, we get a pair of Monday games rescheduled for the benefit of German football’s two Europa league semi-finalists. After restricted access over the first few weeks of full-capacity, tickets are back on public sale for Germany’s red company team.

Anyone interested in attending should have no problems doing so. 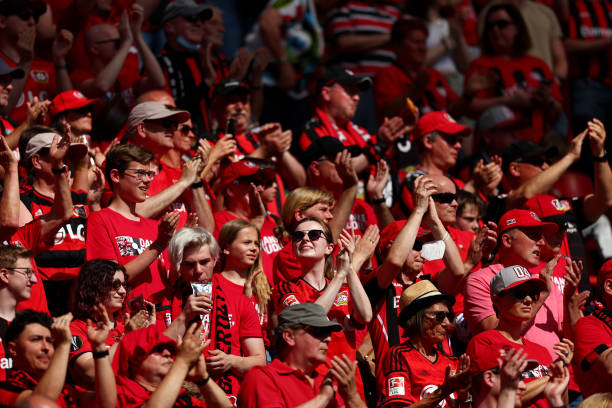 The support within the BayArena wasn’t really sufficient to punch through the monotony of this match. It was nevertheless there. Gratitude to the ultras of Germany’s red company team for turning up and giving it a go.

Of course, the entire reason this column found itself delayed pertained to the fact that we wanted to tack on some more photos of Frankfurt support. 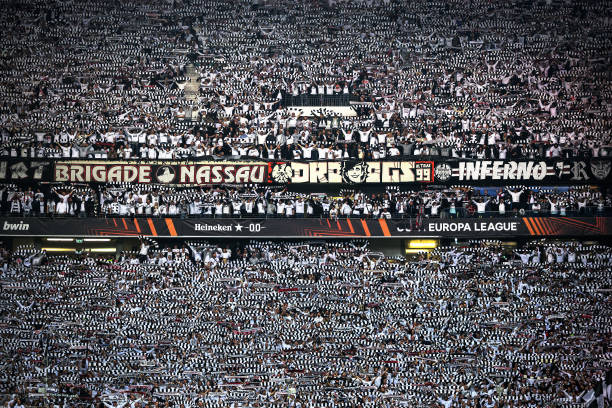 Scenes from last night = balm for the soul.

Not much at stake for the foals after they ensured class preservation last weekend. Another season of mid-table mediocrity draws to a close; not soon enough for his long-suffering fan base. Over three-quarters of the stadium remains empty three days out from this match.

One can literally sit anywhere one wants. 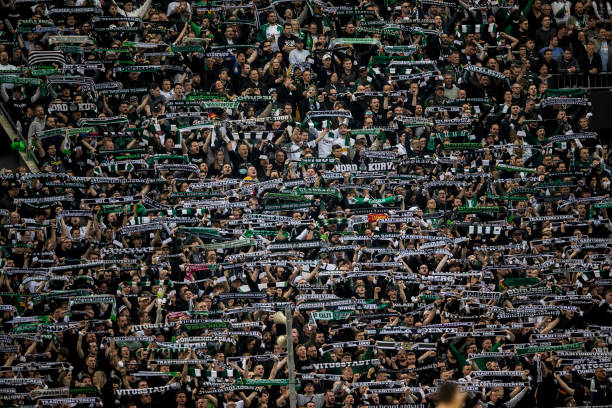 Truly terrible attendance over at Borussia Park on Monday night. Like NRW’s other West Prussian club, BMG enthusiasts join BVB supporters in simply wanting to get this season over with. A nice experience for those who did come after all. They got a rare chance to cheer a Fohlenelf victory down the stretch.