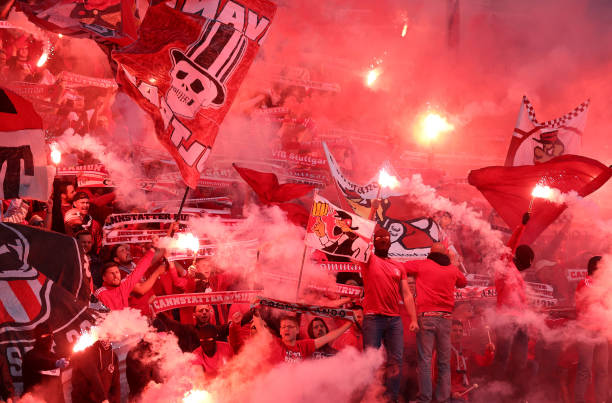 Our next re-post combines the matchday 31 primer article with the round 31 attendance figures article published some three days later. 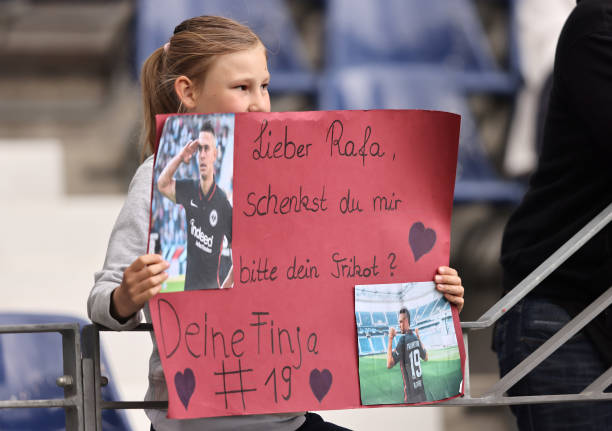 Entering the 2021/22 German Bundesliga’s 31st matchday, only one of the nine fixtures set to take place has sold out. As just about anyone can infer, that would be Dortmund’s visit to FC Bayern München in Saturday evening’s “Top-Spiel”. Everyone else still has space available. Even the doors to the Allianz aren’t closed for those with a little extra time to surf the club-sanctioned secondary exchanges. 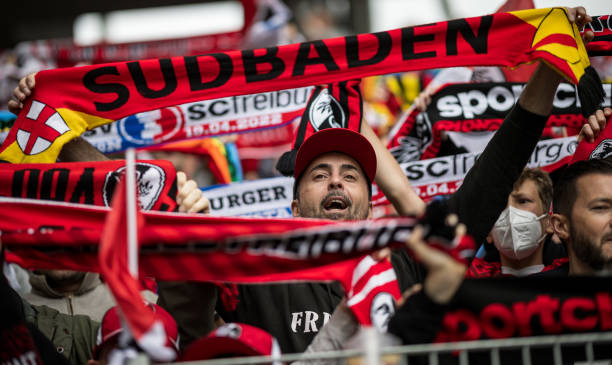 We’re pleased to get everyone hyped and psyched for another great round of the full-color, full capacity Bundesliga fan scene. Amid fabulous spring-like weather, all the ultras shall be out in full force. The pre-matchday primer section takes you through the three days ahead. Welcome! 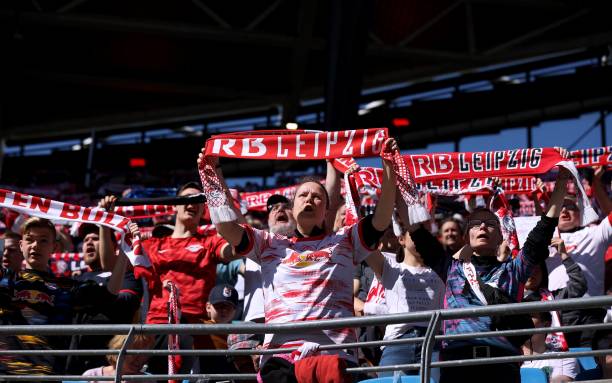 Strong attendance figures across the Bundesrepublik this weekend, with three Bundesliga stadia (Bayern, Köln, and Freiburg) selling out. Frankfurt and Leipzig came very close in the upper 90 percent range. Hertha and Bochum came in just over 85 percent while Wolfsburg and Fürth were down in the 60s. 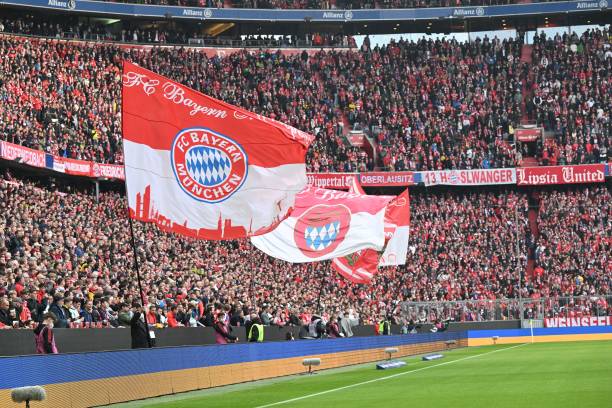 Without exception, each home crowd delivered the authentic German fan atmosphere on what was (in some parts) a rainy, yet warm spring day. Our “Weekend Attendance Figures” feature takes your around the grounds for thoughts on fans and their clubs after another top flight weekend of German football.

Er…is the men’s team playing today? After what happened last week, it may be worth skipping. A much more interesting match (back at the Camp Nou no less) kicks off a little earlier. Safe to assume we’ll hear fewer complaints about the “German invasion force” this time. Know that there is actually a traveling contingent on the way.

Not. Even. Close. Of course not. It is the “Autostadt”, after all. Readers of this column know all about the situation in the “company town”. Column regulars also know that the what VfL ultras do turn up to the stadium are generally a lively, good natured, and uniquely funny lot. 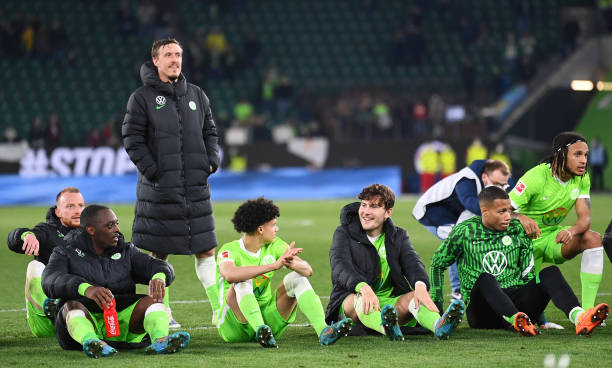 Attending a Wolfsburg home fixture remains something recommended for those looking to check out the Bundesliga cathedrals. Just don’t expect the seats to be full, and remember gravitate over to the fan Kurve as soon you can.

Little chance of a sell out here in an immediate re-match of Wednesday’s Pokal fixture. As disappointed as many Germans may be to miss out on a Union-Freiburg Pokal Final, one still has to hand it to the RB supporters for supplying a lovely atmosphere at the Red Bull Arena midweek. Unlike in Sinsheim, this relatively young fan-base knows how to deliver.

Great support from fans of both clubs. One wonders if some of the Union ultras even went back to Köpenick after Wednesday’s cup semi-final. Perhaps some of them simply opted to take an extended holiday in the “Linden Stadt”. It’s a nice city and (still) a cheap visit.

Many German football lovers, in the continuing quest to accept the rise of the German RB affiliate, are hoping that a rivalry develops between Leipzig and the FCU. Naturally, it can’t have all the historical connotations of a real “East German Rivalry” since the Red Bulls were founded well after die Wende. 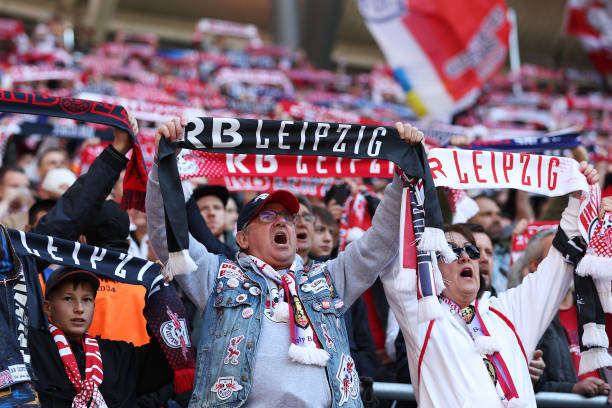 We can’t even seem to get those rivalries back in the second division either. Every year, the clubs keep missing one another. Same story this year. Magdeburg up. Dynamo Dresden and Erzgebirge Aue down. Oh well. At least Saturday’s game helped increase tension between these two.

Yet another home fixture for the team Germans are currently the most proud. Not to say that there would be any complaints if Leipzig made the Europa League Final, but this traditional, historic, 50+1-adherent club serves as our real national heroes. Eintracht’s next Europa League opponents (West Ham United) have already issued a “warning” to Frankfurt supporters about trying to circumvent the rules and attempt to invade London’s Olympic Stadium. 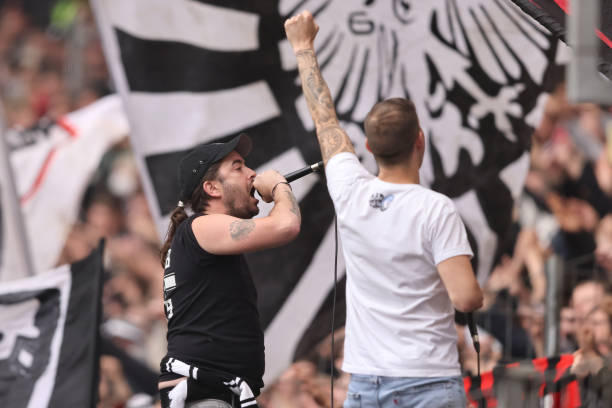 Right. Good luck with that.

Oh, confound it now. Really? Just 500 seats short? C’mon denizens of the Bundesrepublik’s financial capital! Pack the house for “Germany’s team!” The SGE could have given those tickets away to some charitable organizations if need be.

On some more serious notes, this is actually a rather impressive total for a club preparing to host another Europa League match. Additionally, the SGE did give plenty of tickets away to charitable organizations. They always do. 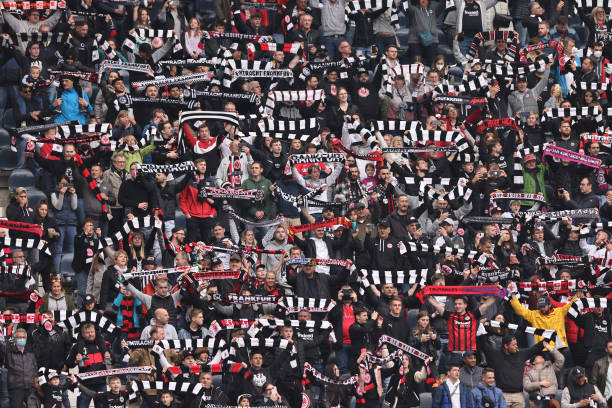 The entire country prepares to cheer on “our lads” against West Ham on Thursday.

One of the weekend’s most highly anticipated matches. Still plenty of tickets available for this one as the local Breisgauer save up their money ahead of the Berlin trip. The support inside the Olympiastadion shall be epic. It’s the moment SCF supporters have literally been waiting for their entire lives. No question about which team German neutrals will be pulling for.

Thankfully, as many people as possible saw this gem of a match live. The always enjoyable SCF ultras also kept it straightforward and clear cut with their Saturday banner. Just “keep up the uncommonly good work”, Breisgauer. It doesn’t really matter which European club competition you qualify for. 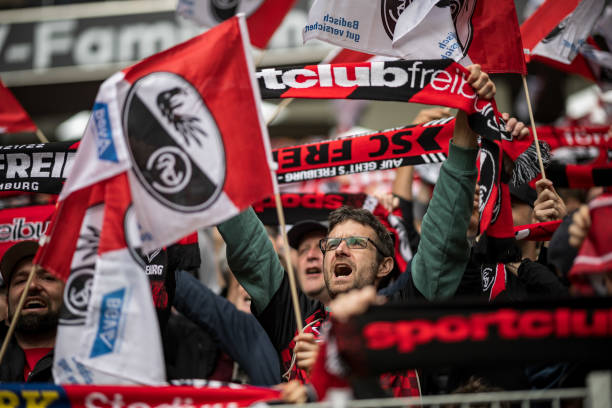 It’s all good. Any one will do.

Poor, poor Bielefeld. Does life after Frank Kramer start with a win? Not a chance. An FC Köln side rising up into noticeably better form look to crush one the league’s dazed and confused “Graue Maus”. The match actually isn’t completely sold out, but one expects it to be very soon. The European dream lives on for Effzeh supporters. Few locals shall miss out on the dramatic late chase. 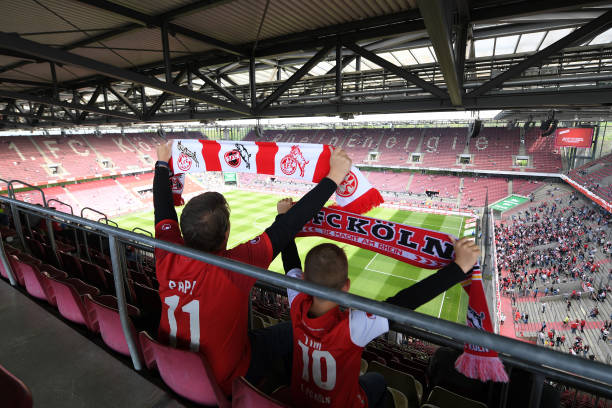 The RheinEnergie rocked and swayed as usual. Everyone had a good time. Cult striker Anthony Modeste may have too good of one if certain sources are to be believed. Sigh. To reiterate the commentary espoused in the tactics column, these “certain sources” really need to learn to shut their mouthes sometimes.

Let Modeste have his fun while he still can. By the way, cathedral city: You’re welcome. If you qualify for Europe, you’ve Modeste to thank for it. Bear that in mind when, after he’s gone, you’re back contesting the relegation race next year. Baumgart flat caps won’t be worth so much then.

Only two home fixtures left for the Middle Franconians. Relegation remains a certainty for the Kleeblätter, but there’s no sense in going down without a fight. Squad and fans shall give their all to ensure that the official expulsion doesn’t result from a loss. Fürth, assuming they do better against Leverkusen than in the reverse fixture, can get quietly relegation with a Stuttgart win or draw in the Sunday evening capper. 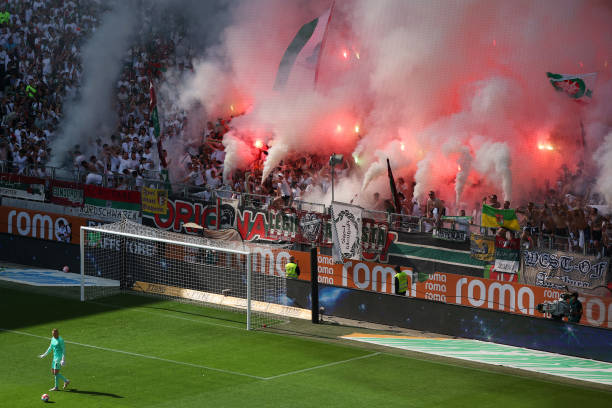 Only one more home game left at the Ronhof before the officially confirmed drop into the lower division takes place. We should see a sell out (possibly even a win) when the Dortmund reserves come to town on May 7th. Nice getting to know you, Kleeblatt boosters. Pleasant journey!

Always tickets available on the secondary exchanges for those who really want to watch this one live. With Bayern in some disarray tactically (and administratively for that matter) hopes are high within German footballing circles that we shall get one of the more competitive versions of this fixture in recent memory. A BVB win victory would count as nothing more than a moral victory.

The title race is still over….and the recent past can’t be erased. 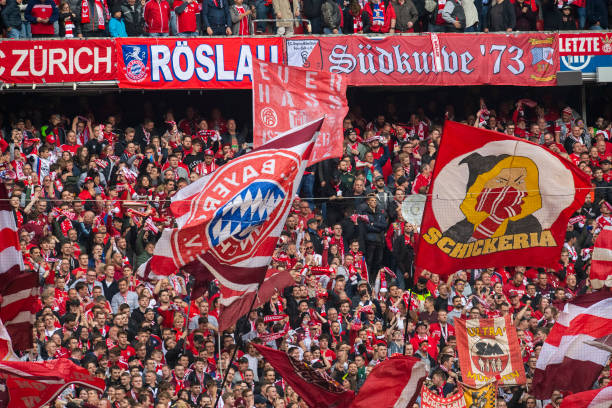 Every last seat filled. Beautiful. All German Football lovers will agree. The question as to whether Bundesliga watchers find themselves disinterested in the league following Bayern’s tenth straight title is actually a rather silly one when considered in the context of current events.

Recall that it had been three long years since we witnessed Bayern clinch a title in front of live spectators. We’re fine. Seriously. It’s all good.

The 1848ers will almost certainly play better than they did last week. They match will also almost certainly sell out on what’s hopefully a gorgeous spring Sunday in Nordrhein-westfalen. Spring football in NRW? What more could one want? Glad we’ll get to see top tier autumn fixtures in this football-mad Revier city next season too! 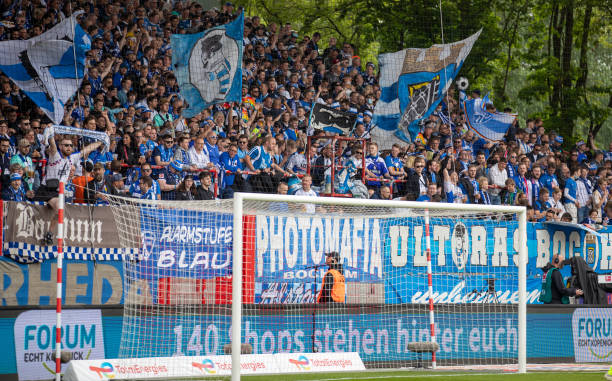 Well short of a sell out the Ruhrstadion courtesy of the fact that the Augsburg traveling fan contingent didn’t make use of their ticket allotment and the local fans didn’t make up the difference. Those who opted to do something else with their Sunday afternoon likely felt vindicated as they didn’t miss out on a great match from the home side.

At least the “beer showers” remained in Munich this time. The fans also applauded their team off rather than, like some of the Hertha Assis, demanding to have jerseys placed at their feet. More on that below.

Hertha’s first home fixture since the BSC ultras opted to make the some of the younger players kow-tow before the Kurve. Of course, you can still get tickets if you want. For his part, this writer will make to bold predictions. First, the fan support will be so amazing that the incident from two rounds back  shall be quickly forgotten. Next, Hertha players will get a chance to celebrate a win in front of their fan blocks.

Yep. That’s right. Believe in the power of the “February Promise”! 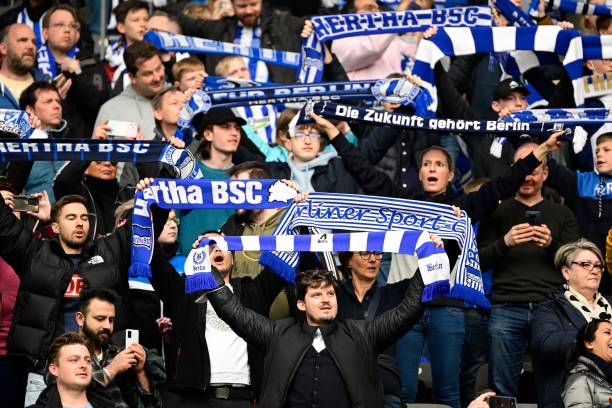 Actually a very good crowd for the Olympiastadion. Those interested in the state of the club-fan relationship in the Charllotenburg quarter of the country’s capital some two weeks after the famous “lay down your tricot” won’t be surprised to learn that the team opted not to visit the fan Kurve after Sunday evening’s victory.

That’s absolutely the correct decision from the lads. As pleasant as the fan support was this weekend, the players still need their space for a while. In time, trust can be rebuilt. A reunion will come at some point, possibly before the end of the season. Distance should hold for now.