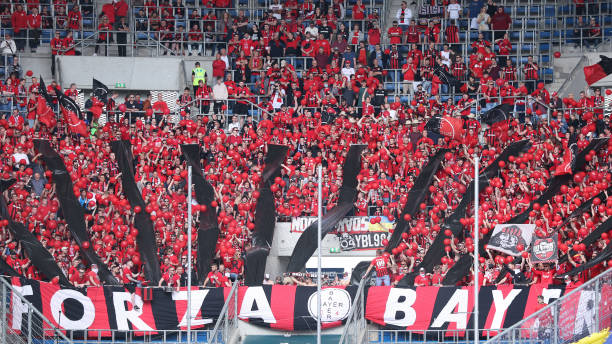 Our next re-post of the day combines the matchday 30 primer with the round 30 attendance figures article published some three days later. 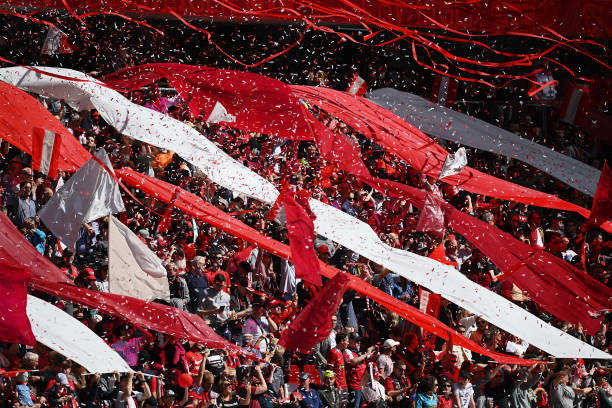 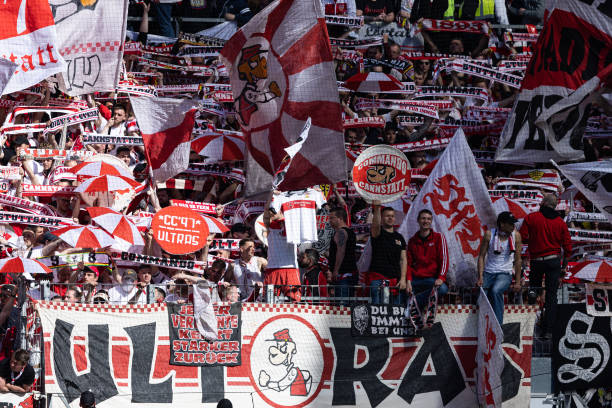 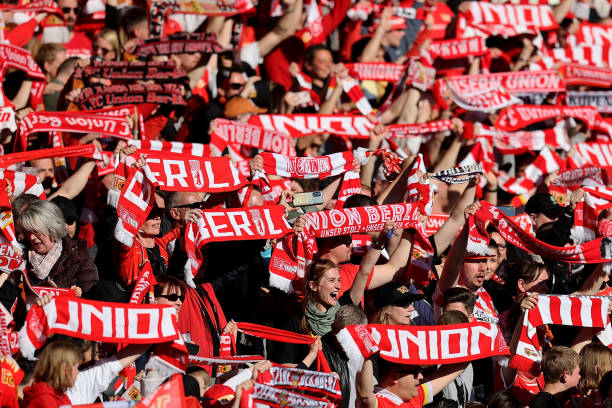 We all look forward to another fabulous weekend of Bundesliga football, ideally one that features less dicey talking points than the last one. Those intrigued by the power of the German football fan-scene outside of the Bundesrepublik this week are always cordially invited to check out what it looks like within the country on league matchdays. 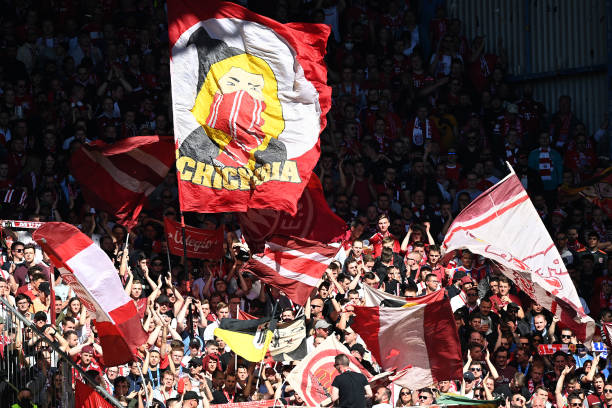 Three Bundesliga stadiums filled to capacity on what was a warm and sunny Easter Weekend in the Bundesrepublik. The first major family holiday in Germany not to feature nationwide rules on mass gatherings almost certainly played a role in none of the six fixtures with seats still available on Friday filling to capacity. Dortmund, Freiburg, and Augsburg still registered well over 90 percent attendance. 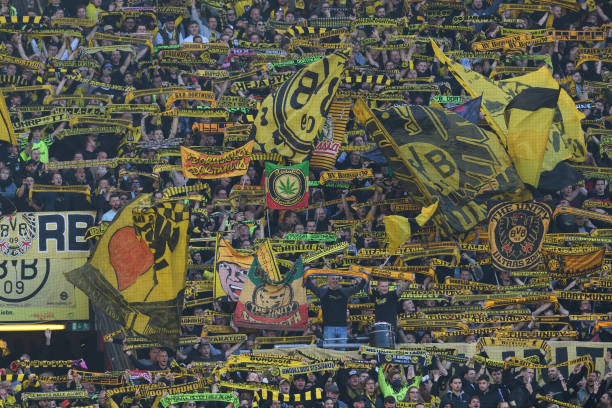 Atmospheres within virtually all German top flight footballing venues remained lively everywhere except Sinsheim. Bundesliga supporters brought with them all the spirit so sorely missed over the past two years of the global pandemic. All the vibrant energy returns to the hallowed German footballing cathedrals.

Still space left at Signal Iduna ahead of tomorrow’s home fixture. The club’s website has a few thousand seats left up for grabs. A pity that this fixture isn’t nearly as meaningful as it was at this time last year. Oh well. Don’t forget that the public sale for late April’s charity match against Dynamo Kiev continues. That’s sure to be a great experience to be a part of. 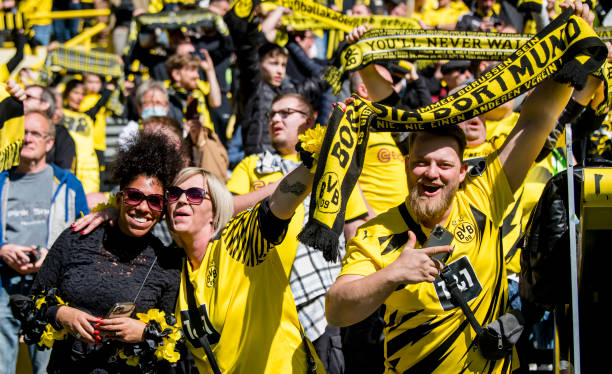 The audience for the “great Wolfsburg drubbing” came in just short of a sell-out. This obviously didn’t matter at all to debutant sensation Tom Rothe; very much a hot topic in German footballing circles after he brought the near-capacity crowd to its feet with a surprise opening goal. Needless to say, the atmosphere at Signal Iduna was electrifying as always.

The Breisgauer aim for their second full capacity sell out in their new venue. The Schwarzwald club is already testing out some capacity extensions this weekend with temporary seating in the lounge area in the south stand. SCF supporters will be out in full force in an effort to cheer their team closer to Europe. 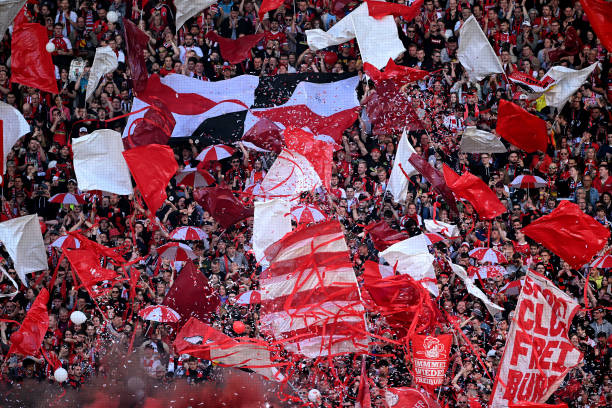 Not quite a full capacity crowd at the Europa Park Stadion watching the weekend’s other big blowout. It obviously mattered not as the home of the Breisgauer rocked at full-tilt. The pre-match festivities included balloons, streamers, and confetti as part of the club’s Easter celebrations. After the team took a bow, the local kids got a chance to visit the pitch again for the first time since the onset of the pandemic.

As trainer Bo Svensson has already pointed out, the hometown team better keep themselves on the level in front of their loyal supporters. Stuttgart should also have a sizable support contingent making the quick trip up from the BaWü capital. Still a lot to play for on both sides, despite what the table might say.

The Pfälzer will be commemorating the two year anniversary of their “Hero Ticket” Program this weekend. Season ticket holders have always had the ability to donate unused tickets from pandemic era matches as well as tickets for future ones to front-line health care workers and employees basic-needs institutions such as supermarkets, supply plants, and freight/lorry moving companies. 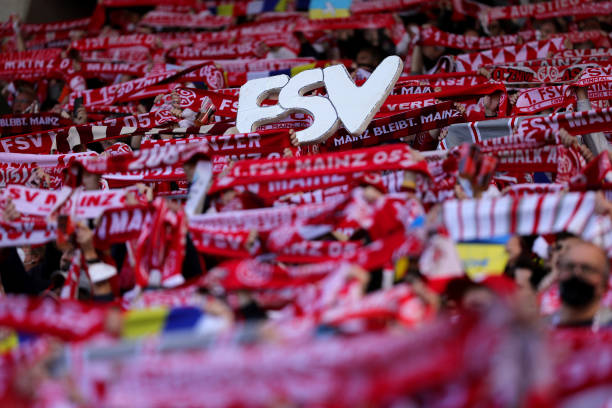 The country still found itself still in the grip of the pandemic well past the halfway mark of the current season, meaning that less than a third of the “Hero Tickets” collected have been able to be dispensed. Now that change has finally come, many more deserving front-line workers are finally getting their free day out at the MEWE Arena.

Donations are still ongoing. One can even buy beer and bratwurst vouchers for those who have kept the most stressful jobs throughout the pandemic. One might as well. No sense in treating someone to a Bundesliga experience without going all the way.

As one could tell from head-coach Bo Svensson’s pre-match presser, interest among the fan base in the Pfälzer capital declines somewhat as this “stable in mid-table” campaign draws to a close. This fixture thus came in well short of a sell out. Official confirmation of at least the relegation playoff place came Sunday following the Bielefeld loss. The club felt ready to go ahead and confirm another season anyway. 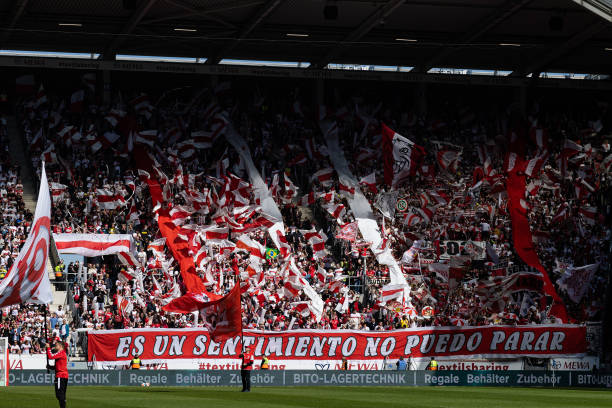 A huge match for both sides. An odd feeling that Augsburg can potentially manage to secure safety so early in the season, without the chaos of firing a trainer in the final weeks no less. This doesn’t feel like an “FCA end-of-season” spurt at all. Of course, Hertha could throw a wrench into what we perceive to be the relegation race with a win.

Somewhat surprising to see that some tickets are still available via the club’s website.

Not quite the support the Fuggerstädter might have been hoping for in a match they’ll still be kicking themselves for dropping. Candidly, the atmosphere felt rather subdued at times, particularly towards the end of the contest. A cutesy, yet still enjoyable, display took place before kickoff as the FCA commemorated the milestone of 20,000 official members.

Well. It’s still the greatest derby we’ve got going in the present German top flight. Not to suggest that last weekend’s Berliner derby wasn’t a joy to behold. It’s simply not a historic one. Hertha BSC and 1. FC Union fans have maintained mostly cordial relations since the Wall fell. Fans of these two clubs, on the other hand, remain fierce rivals. 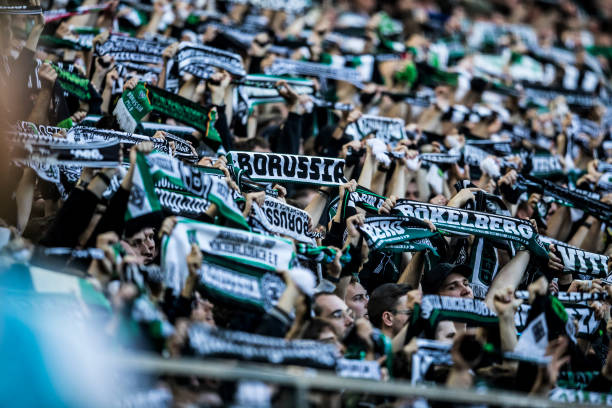 The club’s website indicates that the 93rd edition of the “Rhein-derby” is all sold out. The BMG faithful, hopefully shaking off that lingering disappointment over Marco Rose’s betrayal, should be prepared to give us a good show in their first derby back at full capacity since the onset of the pandemic. It would also be nice if they’re team didn’t quit as they’re liable to these days.

In lieu of a (fully deserved) refund, BMG enthusiasts who packed Borussia Park were issued an apology by trainer Adi Hütter after a rather embarrassing display in the derby. Genuinely a bitter waste of a great crowd. The Kurve were silenced early. Understandable whistles, jeers, and boos from the disappointed Fohlen faithful.

All sold out at the Alm for the visit of the German giants. No surprise there. The DSC supporters don’t care if they stand little chance. Evidently, the club’s marketing team doesn’t care much for the lessons of history either. “No one conquers the Teutoburg Forrest” has been resurrected as the club’s rallying cry. 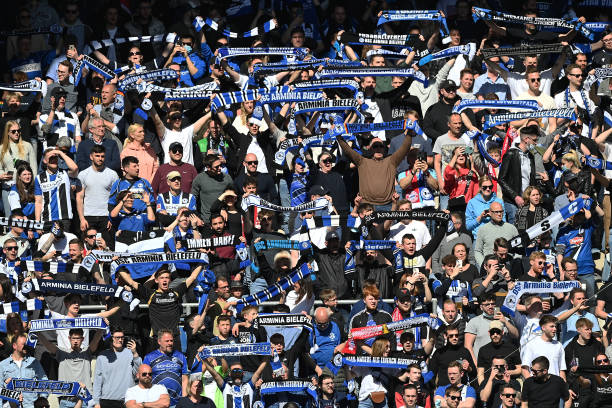 Er….this writer seems to recall the Romans managing just that on the second go.

One must admit that the heavy underdogs certainly responded well to the raucous audible support inside the packed Alm. The Teutoburgs played well above their level for long stretches during the loss to the mighty German giants. A sold-out crowd in the DSC’s home arena is something all Bundesliga enthusiasts remain pleased they got a chance to see before the time comes for German football’s quintessential “yo-yo club” to head back down.

Impossible to even begin discussing this match without touching upon what everyone is now referring to as the “Greatest Fan Betrayal of the 21st Century”. Sigh. Okay. Look, we’ve all had our fun. It’s already time to move on. After Eintracht Frankfurt fans breached the Camp Nou footballing fortress, FC Barcelona President Joan Laporta announced earlier this evening that Barcelona will now only sell personalized tickets for future European fixtures. 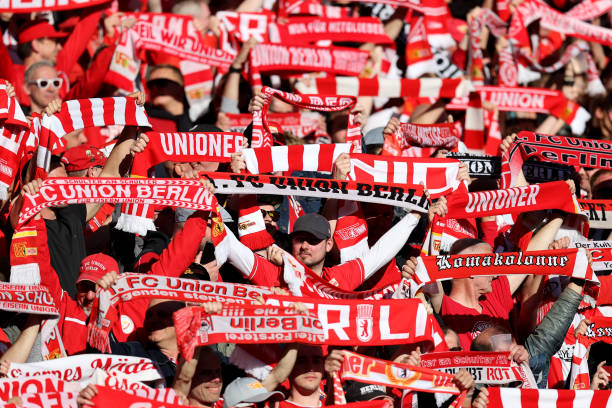 Apparently, far too many Barça fans scalped (or touted) their tickets to Eintracht fans outside the stadium. Some Catalans also reportedly furthered their tickets onto German friends who live in the city or came for an impromptu visit. Personalized tickets now punish the FCB season-ticket holders by preventing them from doing so in the future.

Wait. Stop. WRONG. At the end of a day, this is still just a game that we’re meant to all enjoy together. Football is meant to encourage cooperation and friendship among fans of different nationalities, not exclusively prevent it. Even a person who takes the game as seriously as this writer doesn’t call for exclusion after his team or country loses a match.

It’s okay to behave like adults in the footballing context. Honestly, it is. 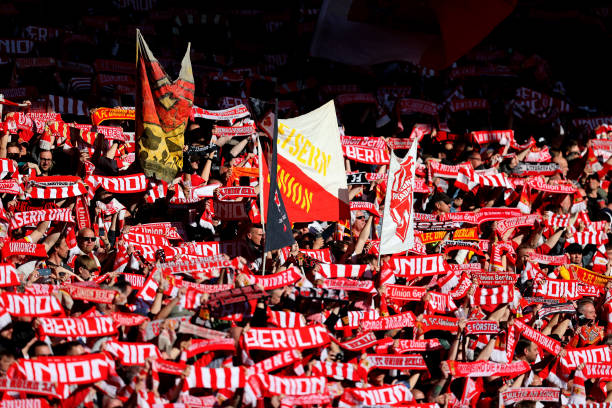 All sold out in the country’s Köpenick quarter for Sunday’s fixture, but non Union fans can still purchase re-sells on the club’s sanctioned secondary exchange. No need to give out personal data either. It’s only a game.

Visiting trainer Oliver Glasner took full responsibility for the squad rotations that effectively turned the visit to Köpenick into a “no-contest” fixture. After the emotional win over Barcelona at the Camp Nou on Thursday night, Glasner aptly described his team as “a lemon squeezed dry.” Oh well. At least the Eisernen ultras got a dominant performance to cheer on.

The fans made clearhat they expected much more from their team in this potentially historic week. The Union supporters home to get one more “home game” in this season in the form of the DFB Pokal Final in Berlin’s Olympiastadion. Best of luck on the trip to Leipzig, Jungs.

Always space available in Sinsheim for football fans of all stripes. Three quarters of the stadium still has group seating available for anyone interested in watching a team actually fighting for a place in Europe. Who knows? The reverse fixture yielded nine goals. Maybe one will get another insane scoreline here. 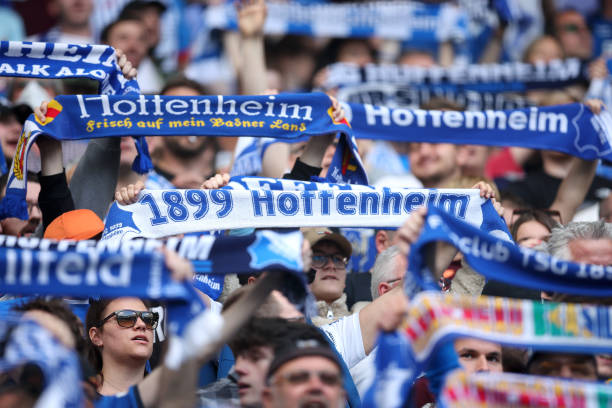 As usual, it was all quiet on the Sinsheim front. The visiting supporters made their voices heard at the PreZero. Neither team truly made much heard on the pitch in a match that ended in a 0-0 draw. So it goes in Kraichgau. No real fan news to pull from this club.

Definitely a marquee matchup here between the Bundesliga’s third and fourth placed teams. Some passes remain available through the Werkself website, though this last of the Easter Sunday matches will likely sell-out soon. This fixture has the distinction of being the first home B04 with a public sale option since the return to full capacity. 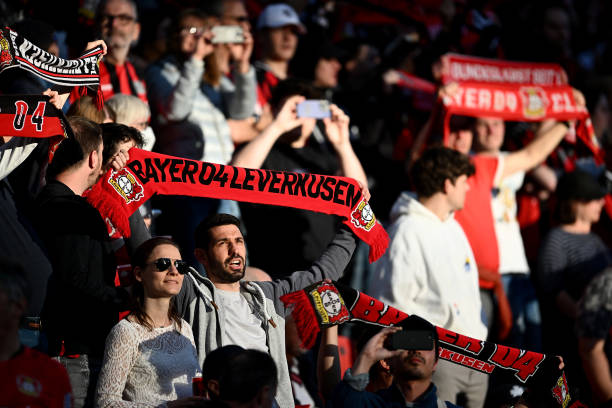 Not necessarily a shock to see this fixture not sell out as predicted in the primer. It was, after all, Easter Sunday in the sleepy company town on the first year that family gatherings didn’t risk running afoul of pandemic restrictions. Fairly sleepy match as well. Luckily for those of us watching, the Nord Kurve was out in full force.