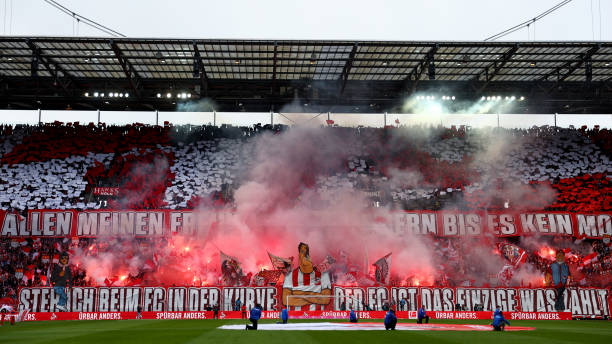 Our next re-post combines the matchday 29 primer article with the round 29 attendance figures article published some three days later. 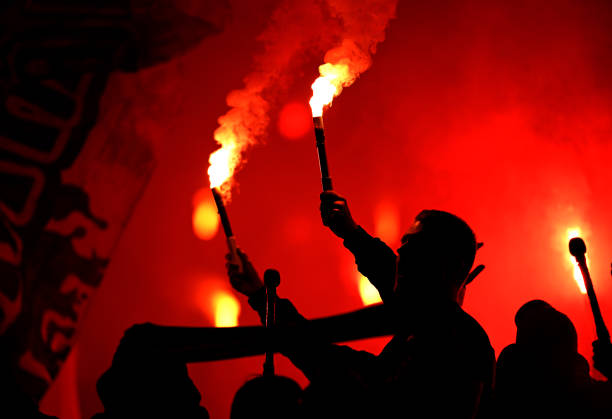 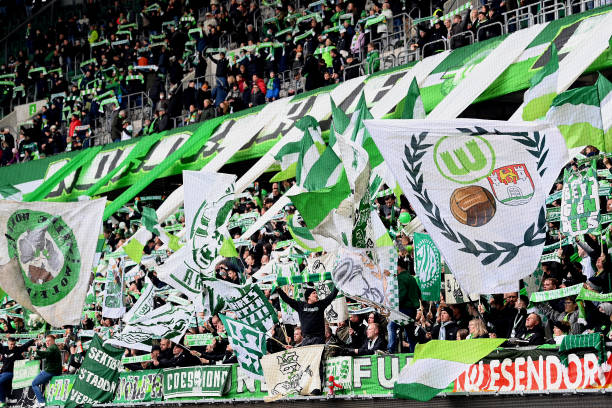 As we enter our second full weekend of full stadiums across the German Bundesrepublik, two fixtures (Köln and Hertha) are already sold out. Naturally, those perhaps interested in attending those Bundesliga matches can still get tickets via the secondary exchanges. The remaining seven games (yes, even Bayern) still have tickets available. 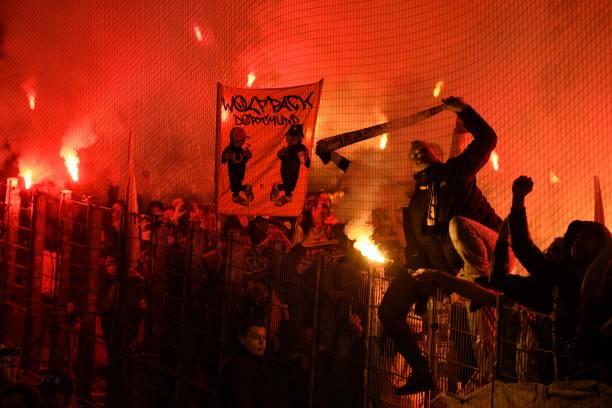 Everyone in Germany eagerly awaits another great weekend of top flight German football. Last weekend’s festivities–superb though they were–did take place among some rather frigid weather conditions. A little light early April snow dusted pitches in some cases. This weekend’s temperatures look to be slightly warmer. It still appears as full spring-time football in Germany will have to wait a tad longer. 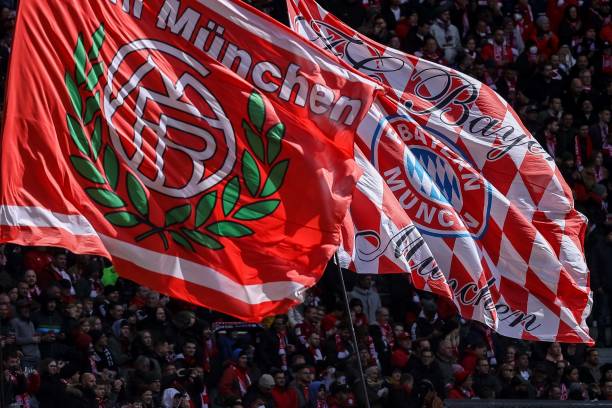 Our weekly league attendance feature arrives a little later this week thanks to the fact that three German clubs had European club competition dates during the week. Once it became apparent that Eintracht Frankfurt fans were embarking on a modern-day crusade in the Catalan capital, it seems only right to defer on this aspect of the fan-scene support. 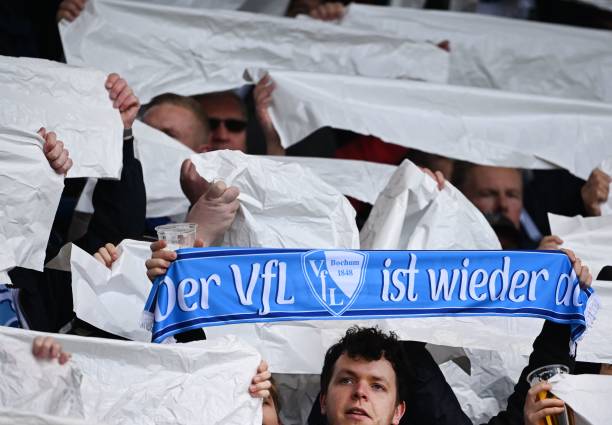 The work of fans in the midweek fixtures of Frankfurt, Leipzig, and Bayern is thus folded into the attendance figures from the 2021/22 German Bundesliga’s 29th matchday. Four of the nine league fixtures (Bayern, Köln, Bochum, and Hertha BSC) sold out last weekend. Stuttgart and Frankfurt came in very close at over 90 percent capacity. Wolfsburg, Leipzig, and Fürth clocked in at the 70-85 percent capacity range.

A large gathering of enthusiastic Swabians will be expecting nothing but the best from their team, particularly after the emotionally charged victory over Augsburg in the last home fixture. What an absolutely fabulous show of spirit from the VfB faithful last time around! Great banners and choreo in all the Tribune!

There are still a few seats available for club members via the website. Non-members can still snatch up passes on the secondary exchanges. Looking very much forward to this one! 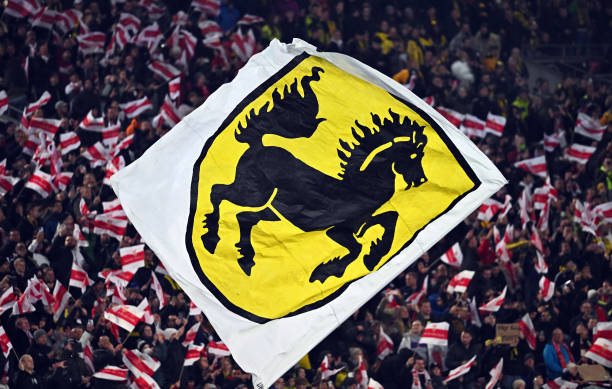 Some very nice images at the Mercedes Benz Arena prior to kickoff last Friday night. The hosting BaWü club organized a flag-waving choreo in the stands. Unfortunately, the crowd mostly fell silent when their team (in far too wide of a shape one must note) failed to deliver consistently entertaining football. Most of these flags are likely already buried and forgotten in the closets of VfB supporters. 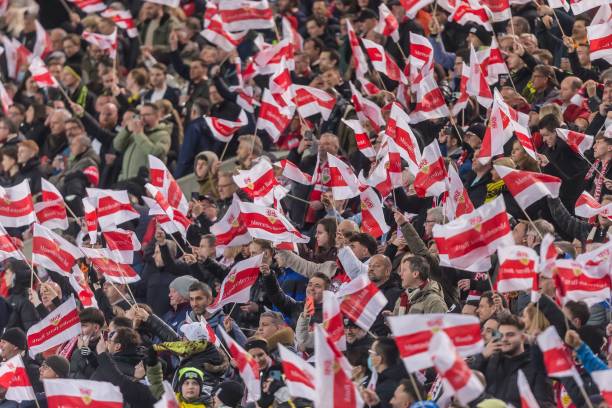 After Dortmund got their turn last weekend, the German giants get a chance to raise the “Daoheim” for the first packed house in at the Allianz in over two years. Incidentally, the last time Bayern played before a full crowd was against Augsburg on the 25th matchday of the 2019/20 campaign; otherwise known as the final weekend before lockdown. 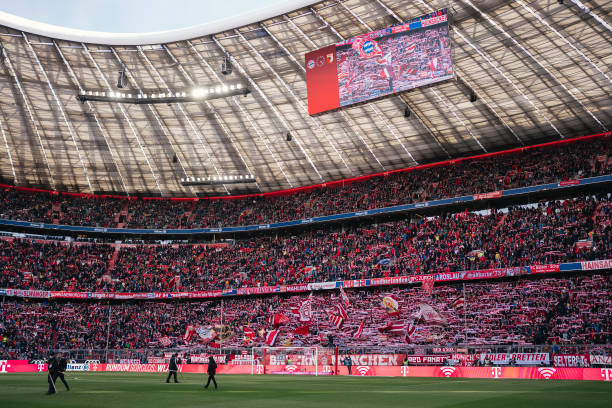 Quite the colorful affair that was. The FCB commemorated its 120th anniversary with streamers, confetti, and special classic throwback kits. There’s sure to be some great choreo planned by the Bayern ultras on Saturday. Members and season ticket holders have most of the passes, but the secondary exchanges will remain active until hours before kickoff. 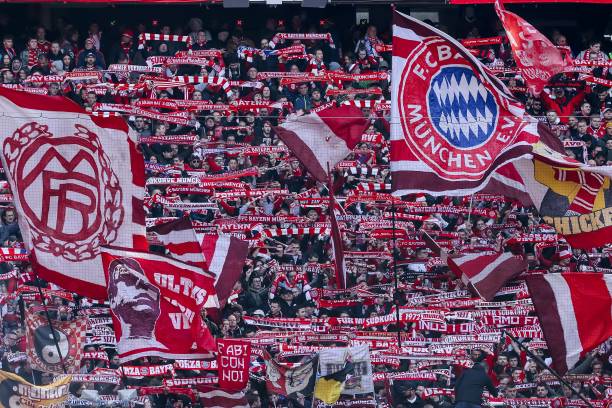 A sold-out crowd at the Allianz naturally reserved much of the chants and choreos for Tuesday’s home Champions’ League fixture. While that result ended up being a heartbreaker for the FCB ultras, the stirring tribute to the “Bomber des Nations” just before the Villareal match got going won’t soon be forgotten.

Ahem. One can always check out Germany’s green company team pretty much anytime you’d like. There’s always space in the Volkswagen Arena. This fixture is no exception. In truth, this club should consider paying you to come out and see Florian Kohfeldt’s underperforming stars. The writer remains convinced the VfL ultras won’t mind that joke. 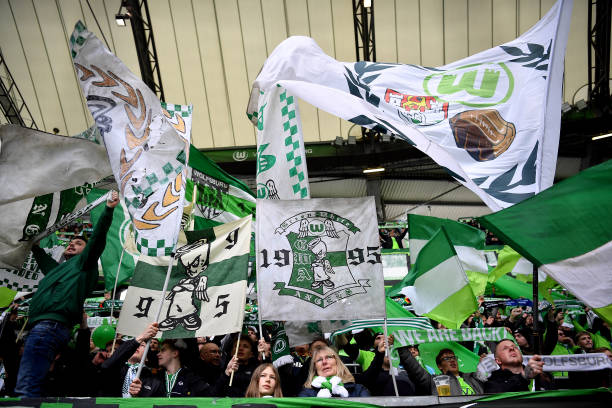 Since substitution errors happen to be a big topic in the Bundesliga these days, it’s worth bringing up a story from earlier in the season showcasing the famous Wolfsburg sense of humor. After Mark van Bommel’s substitution error got the VfL thrown out of the Pokal, the club offered a special “buy five tickets, get the sixth one free” special just to poke fun at itself.

One has to hand it to the ultras of Germany’s green company team. They delivered a wonderful atmosphere during their team’s crucial victory over the DSC in a classic relegation six-pointer. As has been stated often enough in this column, VfL boosters (once maligned) generally enjoy a good reputation among the German footballing public. Attitudes can shift. 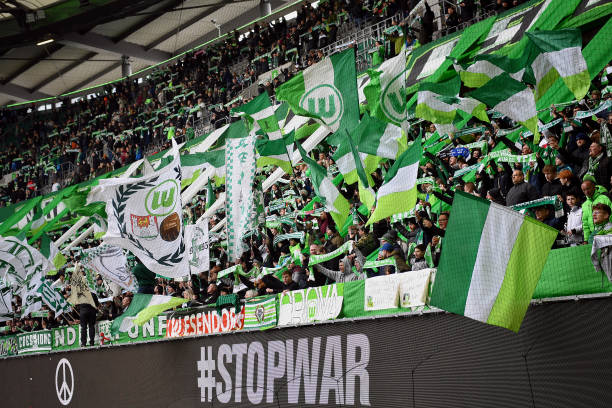 No surprise to see the RheinEnergieStadion already sold out. The Kölner supporters stand behind their club no matter what. The fact that Steffen Baumgart’s charges are having great difficulty scoring goals at the moment doesn’t matter. Will they score here? Sigh. Anthony Modeste is back, but now Sebastian Andersson is out. Uh-oh. 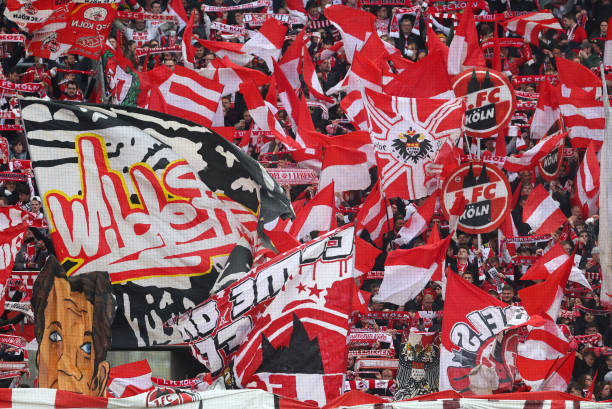 Hopefully it won’t be a midfield slog. These two clubs–“the carnival city rivals”–actually do have a reputation for tense, grueling, and physical affairs. There may be more action in the “Kölner Keller” (the Bundesliga’s VAR nerve-center) this weekend than on the cathedral city pitch. Incidentally, the club’s new sporting director gets his to watch his first home match this weekend.

Er….a warm welcome to the “other Kölner Keller“.

Everything once again spot on at the RheinEnergieStadion. This venue rocked and shook throughout during the stunning Effzeh comeback victory. Köln’s Arena should definitely get top billing for those looking to visit football grounds in the Bundesrepublik. Note that, unlike at the Camp Nou, it’s generally rather difficult for visiting fans to get tickets in the cathedral city. 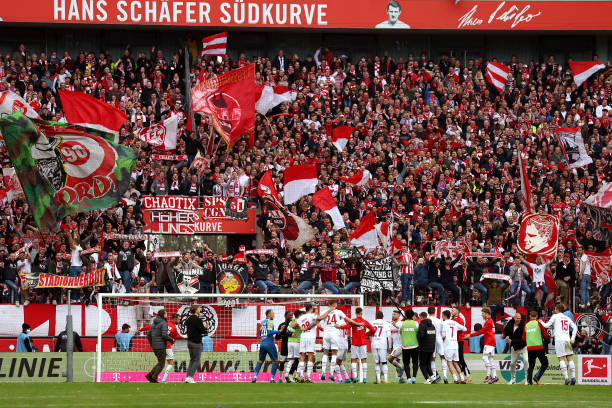 Not too many opportunities to watch “Frankish football” in the German top flight left. Fürth are headed down. Nürnberg are lagging in their quest to get back up. One can always come out to the Ronhof for three more home fixtures, This match might even sell out as some 13,000 passes are already gone.

The Kleeblatt boosters shall sing their team back down.

Loyal and lively support last weekend at what remains, for the time being, the league’s smallest venue. The Middle Franconians love their football, even if it’s not particularly good football.One already looks forward to next year’s Nürnberg-Fürth derby day back in the second division. 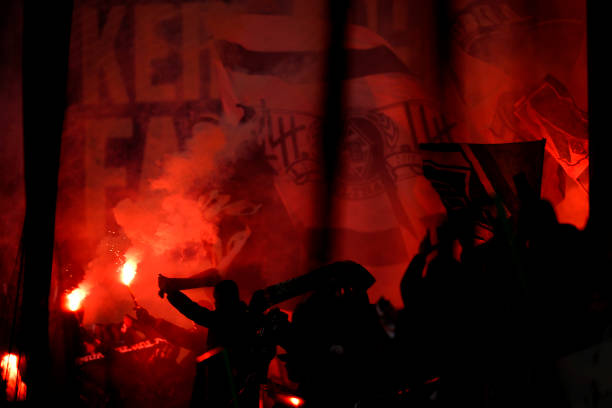 The columnist can scarcely believe it himself. The “Oly” is apparently sold-out already for the big Berliner Stadtderby. This remains one of those things that needs to be seen to be confirmed. There can be no doubt to reports that some 12,000 Eisern Union fans have purchased tickets for the visit to Charlottenburg. One will feel every last one of them. 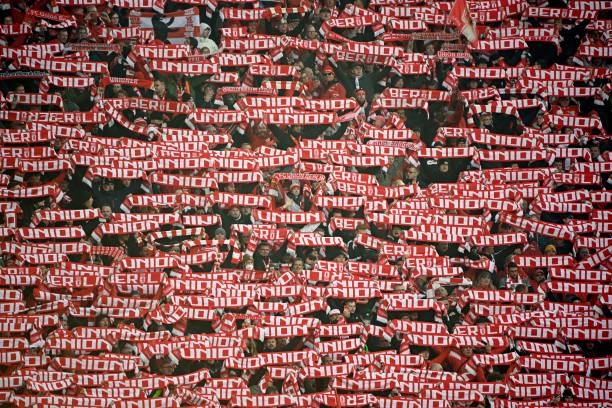 Did 62,649 other individuals shell out good money to come see Hertha? We’ll see. Hopefully so. Sixty thousand plus belting out “Nur nach Hause” counts as one of the best things in Bundesliga football. If Felix Magath’s “alte Dame” falters, maybe Mark Fotheringham can take over again next week.

Lost amongst all the talk of the now infamous “tricot-gate” scandal, there was actually some stunningly gorgeous support on display at the “Oly” on Saturday night. A true shame that most of us German football commentators had to skip over that in order to condemn the actions of haughty ultras who intimidated some of the team’s youngsters in forfeiting their shirts.

Such is football. Beauty sits alongside nefariousness. The unbelievably gorgeous displays share space with the unseemly monstrous ones. Those who attended the match live in the country’s capital have since reported to us that the streets of Charlottenburg were also a glass-ridden mess outside the stadium.

The price one invariably pays for this. 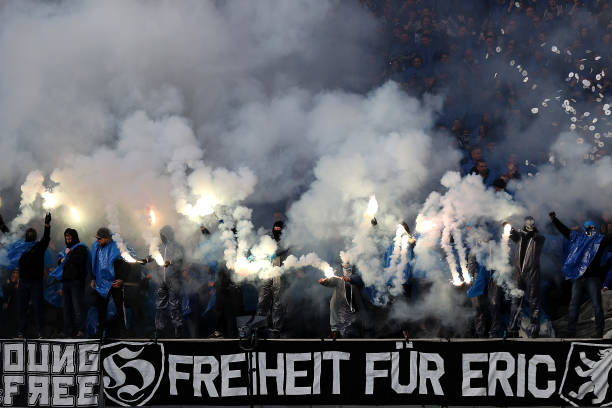 Smile, Bochum fans! All of you are now on “candid camera”! Yes, this is the first home match back for the 1848ers since the abandoned match. Somewhat strange to learn that the club claims to have identified the perpetrator who throw the infamous plastic beer beer mug at linesman Christian Gittelmann partially via “DNA evidence”. 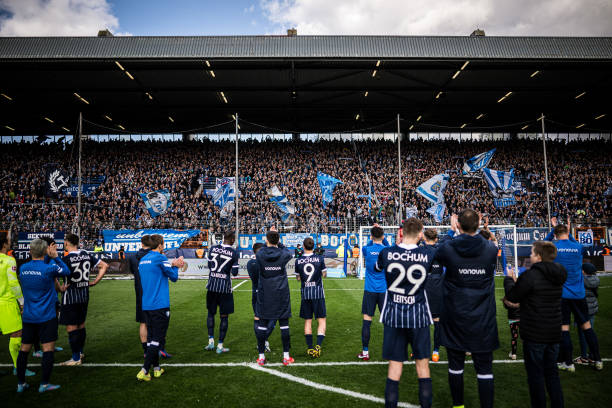 Note the discrepancy from what was initially reported on in the Matchday 29 primer.  Bochum actually became the first Bundesliga club to reinstitute limited capacity after the match abandonment in round 27. Thankfully, courtesy of stern warnings and newly-installed video software, there were no repeat occurrences at the Ruhrstadion on Sunday. 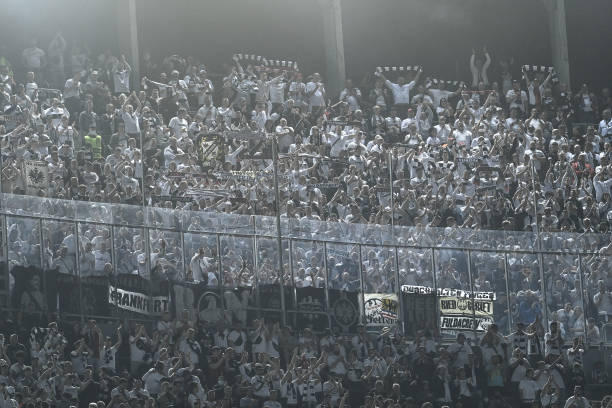 What an incredible display from the Adler supporters in the country’s commercial capital! The stands were rocking and rolling throughout. Will there be anyone with a voice left to get up for a third home match in eight short days?

The club website (for which one must register) still has a few thousand passes left. 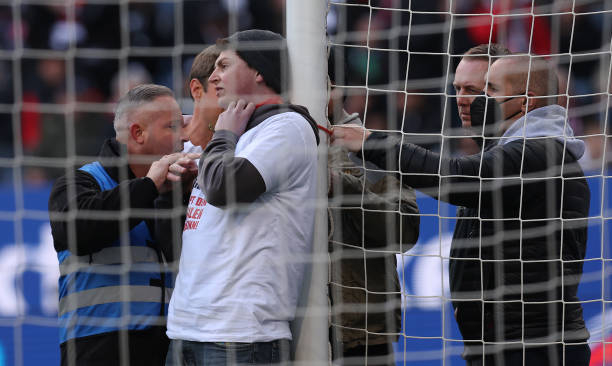 Eintracht’s third home fixture in eight days, unsurprisingly, did not sell out. The SGE fan societies naturally had their sights (and money) set on a much larger project. Simply sensational stuff from the Frankfurt traveling contingent in the Catalan capital. One should simply let the pictures speak for themselves in this case.

A pretty decent turnout for the Atalanta Bergamo tie on Thursday night in the Red Bull Arena. The crowd of some 36,000 made themselves heard, though it still wasn’t anything compared to Frankfurt.

Plenty of seats available for the match Germans refer to as “El Plastico”. 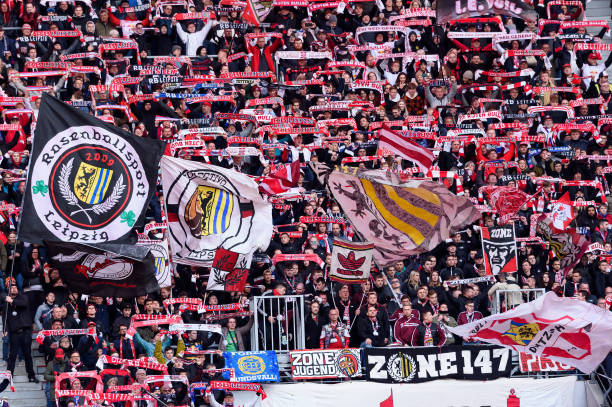 RB boosters similarly had travels on their mind on this matchday. Only a very small contingent made it down to Bergamo for their side’s crusade. There remained a corner for the victorious German Red Bulls at the Stadio de Bergamo early on Thursday evening. Between the Pokal and the next UEL fixture, it’s possible we won’t see the home ground sell out for any more league fixtures this season.