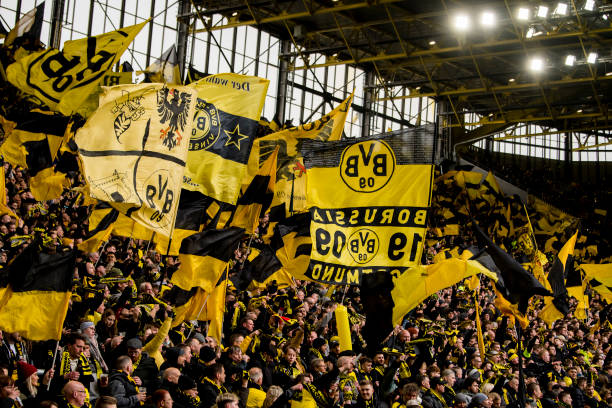 Our final re-post of the day combines the matchday 28 “plans for fans” piece with the round 28 attendance figures article published some three days later. 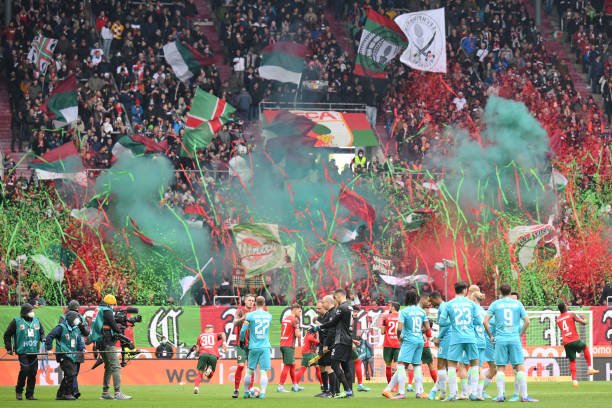 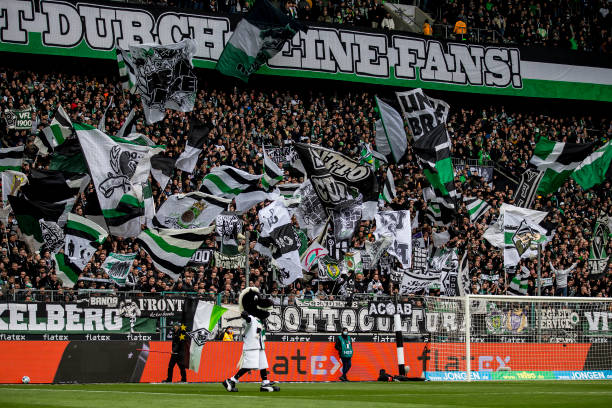 The time has finally arrived. As many of the German footballing ultra groups have been so kind to remind all in recent weeks, “Fußball für alle” (“Football for all”) reigns in the Bundesrepublik. Packed stadiums. Recommended, but not required, masking requirements. Entry permitted for most everyone without a negative COVID PCR test. 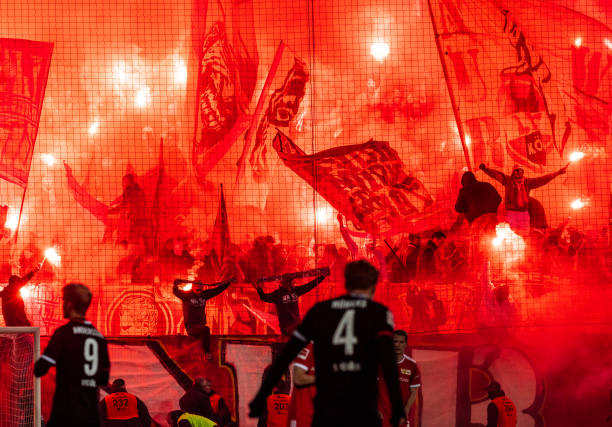 Practically all of the COVID restrictions in the Bundesrepublik are history. Documentation of one’s vaccination/recovery/tested status remains a requirement. All this means for footballing patrons is that they should arrive at the stadium early, something our column advises anyway so that one can meet the locals and participate in civic engagement projects. 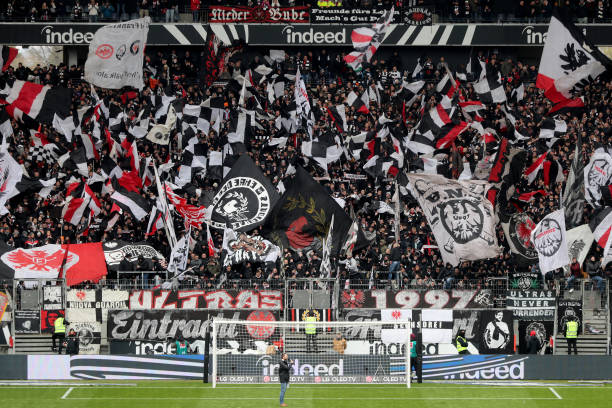 After two long years, the best of German footballing fandom should be on display. One should also mention that–thanks to newly dropped restrictions on alcohol sales within the stadium–we will almost surely get some repeats of the Bochum incident in round 27. It happens. Hopefully we won’t see anything too egregious. Hopefully, we can also manage to look past some unfortunate discretions and enjoy the larger picture. 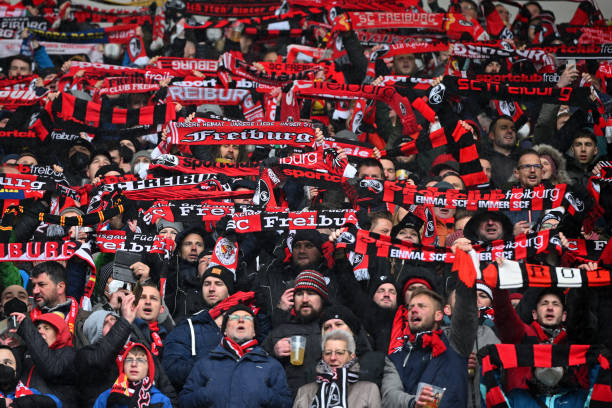 Only three direct sell-outs in Germany’s top footballing tier during first full weekend of “full-house football” in the German Bundesliga. As it turned out, the three fixtures already at full capacity as we entered the weekend ended up being the only ones that remained so. Only Freiburg, Union Berlin, and Borussia Dortmund ended up playing before full capacity crowds. 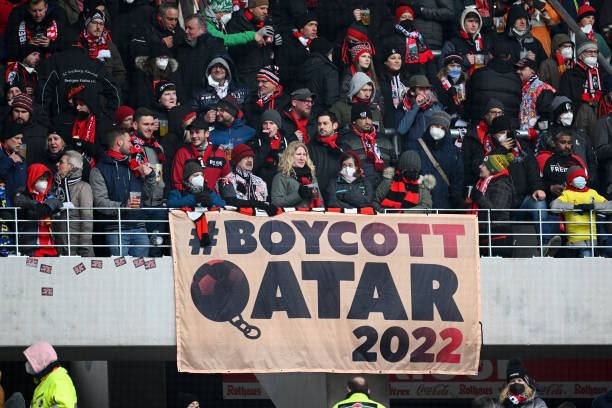 There was still a lot going on in the Bundesliga Fan Scene this past weekend. Eintracht Frankfurt and Arminia Bielefeld came in just a few seats under a sell out. One couldn’t really tell that some extra places went unfilled in both cases. The same was true in Leverkusen, Gladbach, and Augsburg, where the stadiums filled to 75-80 percent capacity.

With the Berlin Infection Protection Ordinance now fully lifted, we can all look forward to a splendid evening at the Stadion An der Alten Försterei. Former Eisernen squad captain Steffen Baumgart can tell you exactly precisely what to expect from a full house in Köpenick. It shall be epic. 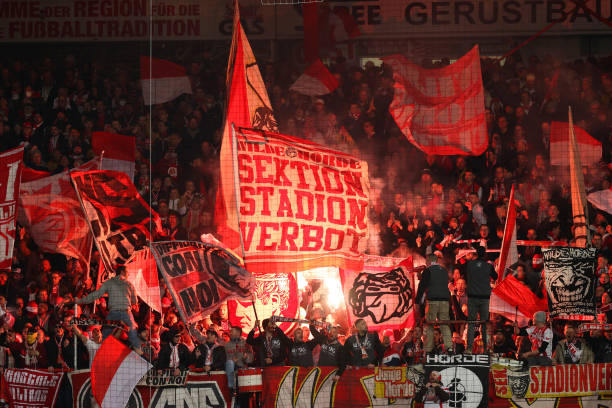 Season ticket holders snatched up all the available passes almost immediately before a public sale could even be conceived of. Fair enough. This day belongs to the Eisernen Ultras, who will be signing in full force thanks to a non-mandatory mask requirement.

Get your weekend started off right! 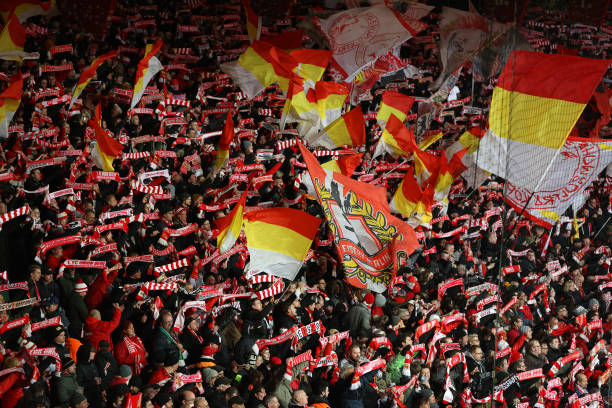 Nothing much beats a full house at the Stadion An der Alten Försterei. The atmosphere could not have been more perfect and the loyal Eisernen Ultras were rewarded for their efforts with an important win. All Bundesliga enthusiasts got an absolutely splendid Friday night under the floodlights. 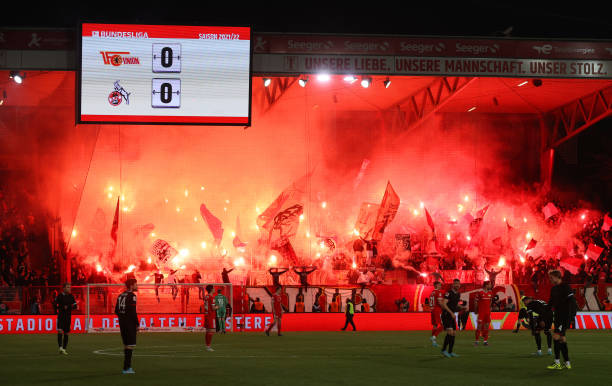 Congratulations to Nigerian striker Taiwo Awoniyi as well on becoming the FCU’s leading top-flight goal-scorer. Man, are we ever going to miss him. Hopefully, he’ll look back at his Köpenick days fondly.

There remain a handful of tickets available (though it should be noted that all of them are in the “nosebleed section”) for those interested in living the “Adler experience” in what’s sure to be a sold-out Deutsche Bank Park. If one doesn’t mind fighting off some atmospheric jet-streams, one can watch Oliver Glasner’s (hopefully not too tired) various national team stars in person. 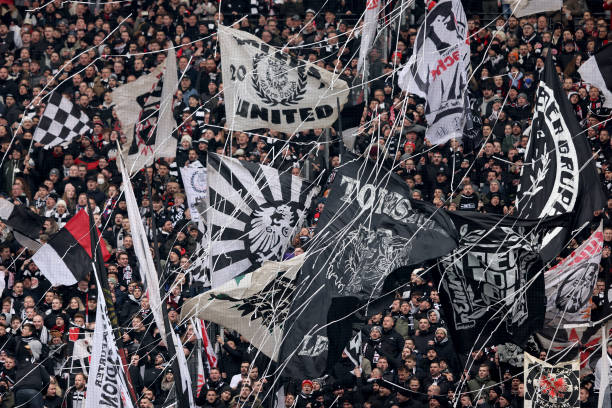 Some legitimate discussion in German footballing circles as to whether the massive throng that turned out for this one deserved the almost deliberately flaccid set of performers SGE trainer Oliver Glasner put on the pitch. Everyone’s eyes turn to the Barcelona fixture now, with even more pressure on the Eagles of Germany’s commercial capital to deliver. 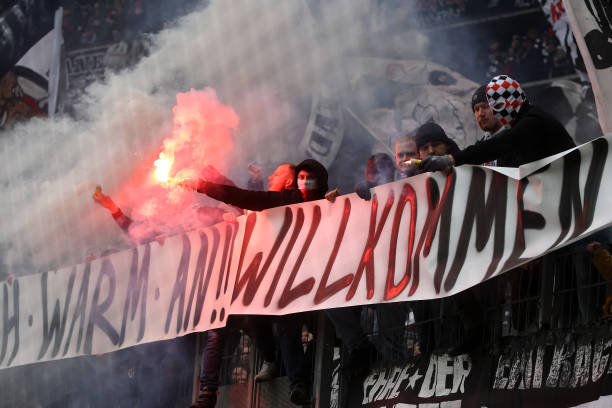 Though this fixture came in a little short of a sell-out, all passes have already been disseminated for Thursday’s affair. As some may have already heard, the club received over 250,000 ticket requests last week alone. A huge night for German football beckons!

Germany’s red company team has a few more passes up for grabs via a late public sale and the secondary market organized for members and season-ticket holders. Those in NRW interested in a little day trip can still gain accesss; perhaps just in time to watch Czech super-striker Patrik Schick score a goal off the bench. 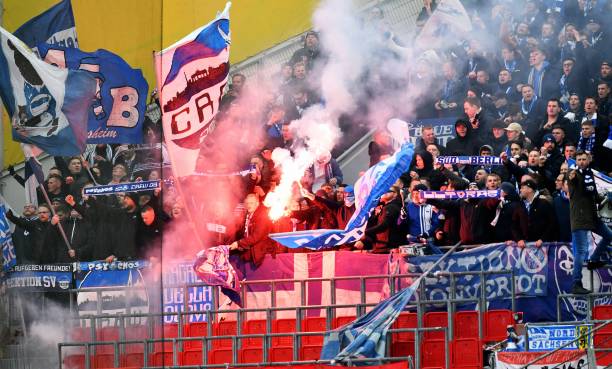 A smaller crowd for what was, after all, not one of the weekend’s best offerings. Most of the ultra groups nevertheless came out to cheer on their team from the famous BayArena Nordkurve. Interest wanes a bit in the company town after the Europa League elimination. The next home match against Leipzig should still sell-out.

The Breisgauer opted to forgo public sale for what shall be their very first chance to pack the new Europa Park Stadion to the brim. Understandable. It also came as no surprise to see this fixture sell-out almost immediately after passes went on sale last week. The German giants are coming to town! 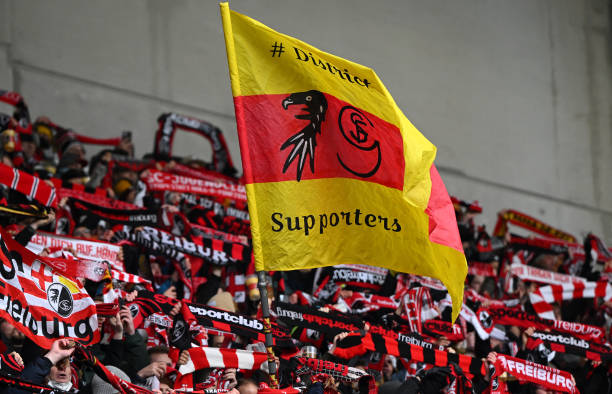 What a treat this one shall be!

Everything was just about right in the first sold-out match ever to take place at the new Europa Park Stadion. Everything save the unfortunate light dusting of snow that invariably hits the winter-weary German populace in early April. That’s something of a sad tradition in the Bundesrepublik. 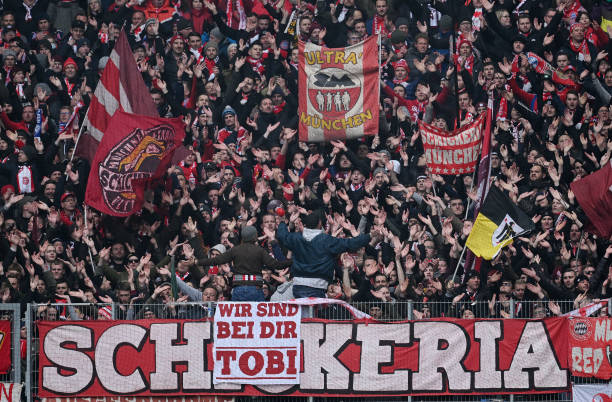 The end-result didn’t exactly conform to hometown fan expectations either. No worries. At least the Breisgauer put on a decent show. Incidentally, should the club (against all expectations) decide to file for a forfeit of the match after Bayern’s substitution error, one can actually expect the SCF ultras to protest their own club. 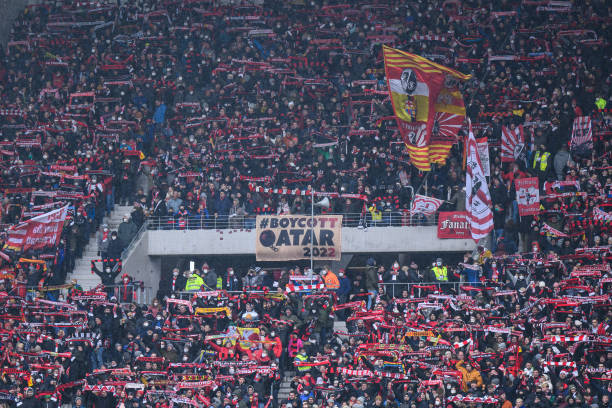 That’s how committed these supporters are to fair play.

Anyone close to the Rhein-Neckar region should have no problems finding tickets in Sinsheim. The atmosphere at the PreZero Arena may not be the greatest, but there are some special commemorations planned for the club’s “Africa Day” charitable fund-raising drive.

Anyone interested in attending can at least watch the Kraichgauer compete in some spiffy special tricots, also available for purchase from the club. All proceeds go to TSG’s civil service projects down south on the “grand continent”. 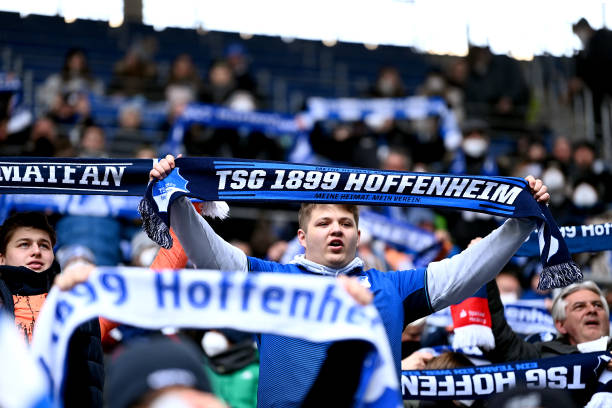 Looks like it’s quickly back to business as usual in Sinsheim. As the country emerged from its COVID restrictions, there were a couple of instances in which this relatively young club sold out at reduced capacity. Now that there’s other public entertainment options in the Rhein-Neckar district, empty seats once again reign at the PreZero. 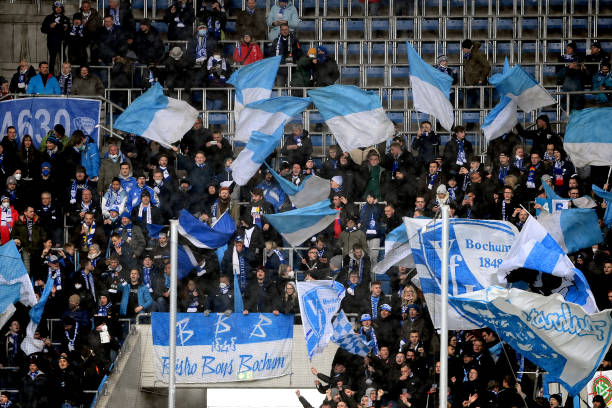 There was something of an important milestone hit on Saturday. The player who has come to define this club commemorated his 300th appearance for die Kraichgauer. The club may not have much of an identity yet, but it does have Sebastian Rudy.

By the time you’re reading this, it’s entirely possible that the very few tickets left for Saturday’s match at the old Bielefelder Alm are already gone. No worries, however. If you’d really like to attend a football fixture at one of Germany’s loveliest old sporting temples, you can check out the German Women’s national team next week.

Yes, we never miss an opportunity to plug the “Mädels” here on Bulinews. Congratulations to the VfL Wolfsburg Frauen on making the semi-finals of the 2021/22 Women’s Champions League yesterday. Wir bleiben stolz auf euch!

Something of a surprise not to see the Alm sell-out. There truly are no other public entertainment options in Bielefeld and the Teutoburgs find themselves in the middle of a tough relegation dogfight. One could fairly say that the near capacity crowd that did show up played an important part in helping their team score a late equalizer against a superior Stuttgart side. 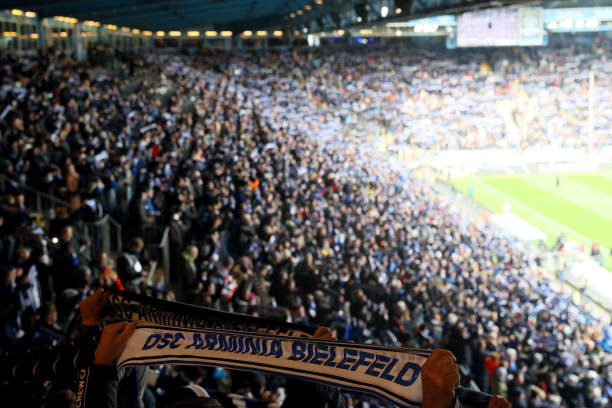 The atmosphere at the Alm was truly great. One had no impression that the match didn’t sell out based on the chants and song emanating from the stands. Naturally, everything fell quiet when a horrific head collision late in the match left club legend Fabian Klos on the deck with a gruesome head injury.

The Bielefeld supporters showed great class in applauding VfB Stuttgart striker Sasa Kalajdzic when he helped carry the stretcher out to the pitch. This scene has already gone viral.

Some Saturday evening “Top-Spiel” this should be! Prepare yourself for some energizing scenes. After 763 long days, Signal Iduna will once again be filled to capacity. Over 40,000 passes sold out in a few short hours after the club’s scheduled public sale on Monday. 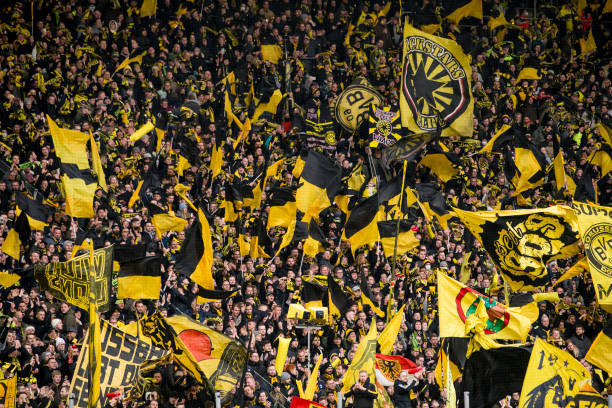 Get ready for goosebumps. Masks are “optional”!

Yes, it was easily the most amazing scene of the weekend. One of Germany’s greatest footballing cathedrals packed to the brim for the firster time in over two years. For the most part, the hometown fans remained supportive of their Schwarzgelben even if the result didn’t fall in line with their hopes. 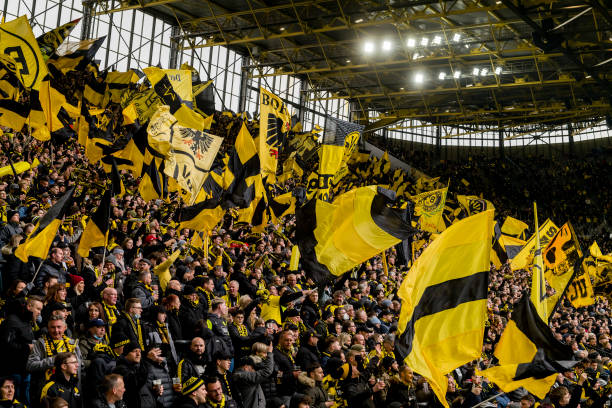 Obviously, there were still boos, whistles, and chants of “Rose out” to be heard from some of the attendance ranks. There’s simply no way that an audience of over 80,000 could all share the same sanguine opinion about their team.

For a little while, there was some question as to whether Bavarian authorities would (like the rest of the country) allow COVID spectator-restrictions to fully fall. Augsburg, Bayern, and Fürth only got the complete green light earlier this week. The Fuggerstädter will be pleased to welcome you. Members and season ticket holders snatched up over 20,000 seats earlier in the week. There’s nevertheless still plenty of space available. 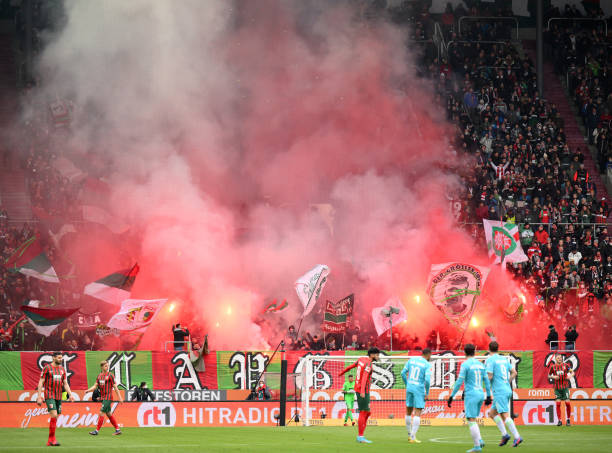 Florian Niederlechner made certain to credit the fans shortly after the Fuggerstädter secured a massive victory against their relegation rivals. It was indeed a great sowing from the Bavarian Swabian supporters, even if the match itself didn’t end up selling out. These fans always bring their best to the WWK Arena.

All those who have cheered this club on through an incredible 11-year-uninterrupted stint in the German top flight are a national treasure of sorts. Few, if any, German football watchers expected Augsburg to spend much more than a season or two in the top flight when they were promoted back in the 2010/11 season.

Against all odds, here they are. 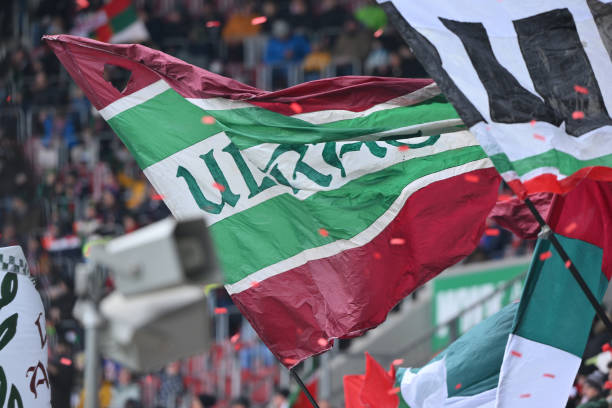 Thanks to the fact that this is a Sunday (and we’re dealing with a team engendering less than great enthusiasm locally), one can still have one’s pick of seats just about anywhere in the stadium if one wishes to watch these West Prussians live. Do note that as the weekend progresses, thousands of tickets will go by the hour. 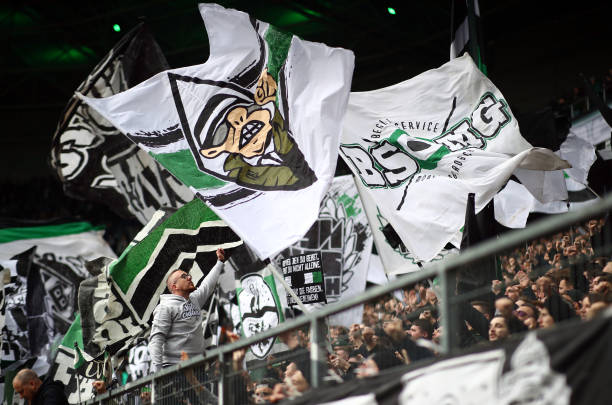 Not a sell out, but still larger attendance numbers than one might expect for this team. The atmosphere at Borussia Park remained serviceable, thanks in large part due to consistent cheers from the Kurven. The BMG ultras sang their lads home even as the team wilted down the stretch.