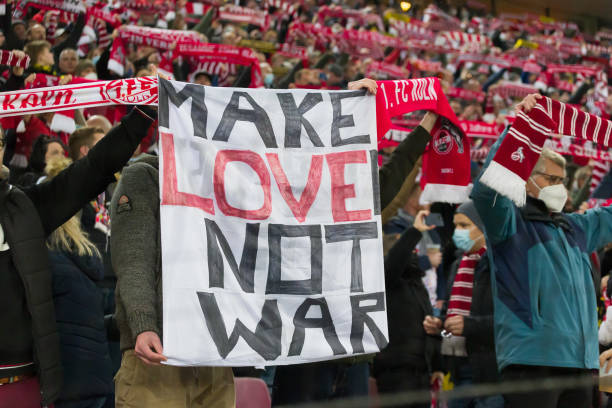 Our next re-post of the day combines the matchday 27 “plans for fans” piece with the round 27 attendance figures article published some four days later. 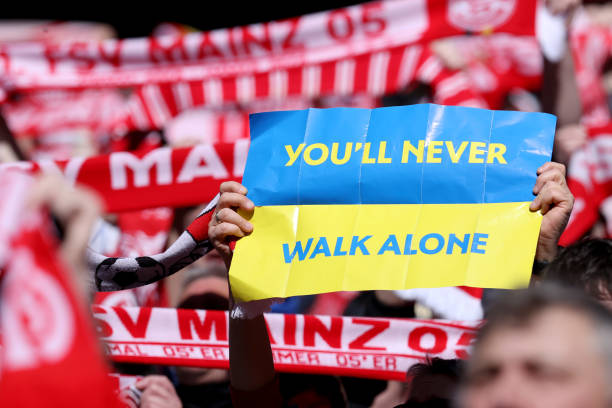 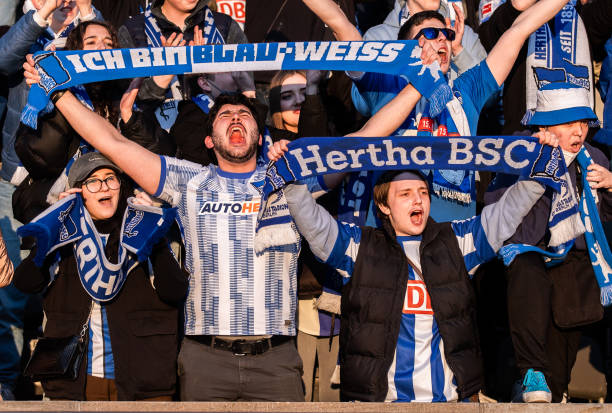 The historic date is finally nearly at hand. While there is still some legal wrangling/logistical planning still left to attend to for some German football clubs, all three hosting matches this Sunday have made preparations to welcome full capacity crowds on the very first day that it is allowed across the country. 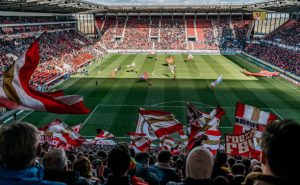 With great pride and boundless enthusiasm, Bundesliga lovers are pleased to proclaim the return of what we consider one of our greatest national treasures. It is naturally bittersweet that–after two long years–the full return of the Bundesliga fan scene must take place before such a dour geopolitical backdrop. 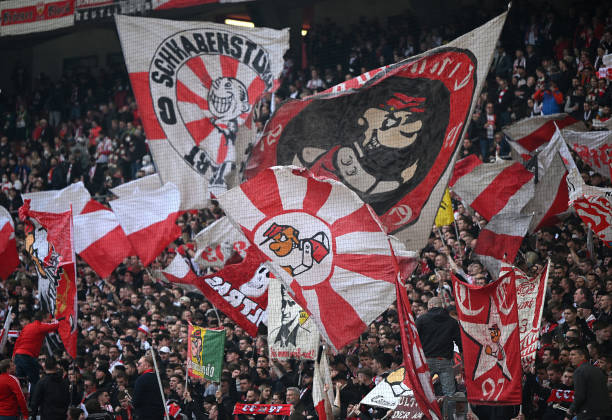 Even in these tense and trying times for the European continent, reverie and merriment will take place across the Bundesrepublik this weekend. Just as we did last week, we’re pleased to provide up-to-date ticket availability information for all the fixtures scheduled to take place in the coming three days. For the first time in two rounds, a full slate of nine fixtures is on the docket. 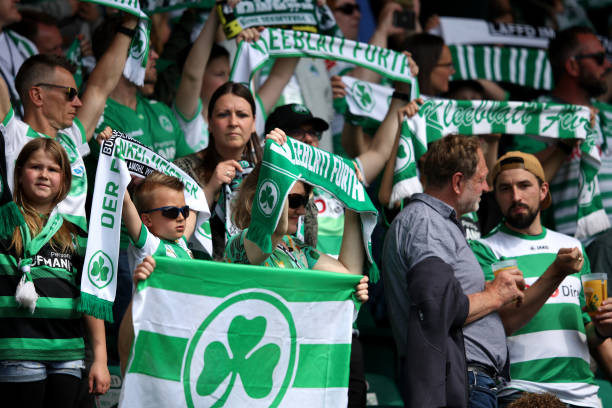 Our weekend attendance feature returns, back in the visually enhanced style that we debuted last week. The final Bundesliga round before the season’s final international break ended up being an emotional rollercoaster ride for those who hold German football dear. From the agony of the abandonment in Friday night’s round 27 curtain raiser to the ecstasy of 50,000 Westphalians in Köln’s RheinEnergieStadion on Sunday night, football lovers across the Bundesrepublik ran the full gamut of emotions. 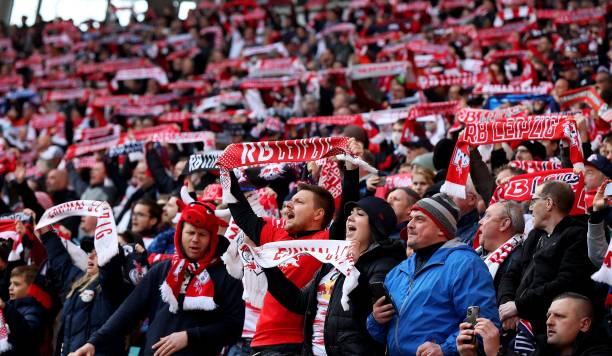 Much happened in-between those two fixtures on the first weekend that permitted full stadiums across the country since the onset of the pandemic. We’re once again pleased to take you inside the hallowed Bundesliga footballing cathedrals here on Bulinews. For better or worse, there is much to talk about. There’s also still some fantastic opportunities to attend fun football matches in Germany during the international break. We’ll discuss those below as well.

The Castrop’ isn’t quite ready for full capacity yet due to the lingering NRW regulations still in place for two more days. One may still wish to bet on the home side here as the atmosphere is sure to be rousing at the Ruhrstadion. Nothing stands in the way of a great fixture to raise the curtain on the 2021/22 German Bundesliga’s 27th round. 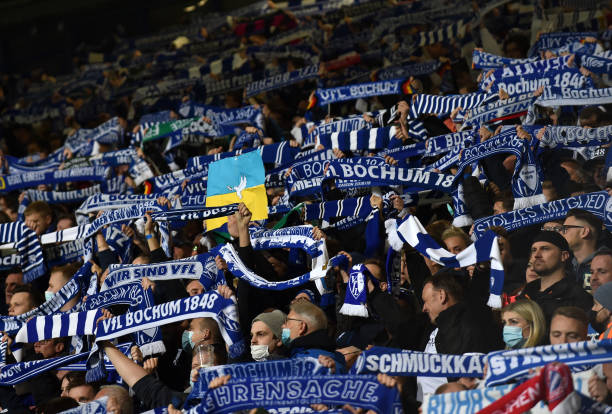 The club has already sold out all of its tickets.

Deep sigh. Yes, we must address this first. The incident involving Bochum fans wasn’t unprecedented this season. It actually wasn’t even the only case of such behavior this very weekend. A plastic beer cup narrowly missed SV Darmstadt 98’s Tobias Kempe as he attempted to take a corner kick in Bremen. It happened at the Veltins Arena in Gelsenkirchen as well during Schalke’s home match against Hannover 96.

Deeper sigh. We’ve talked about how Bochum had their club captain Anthony Losilla implore the fans not to engage in such behaviors during a lighthearted pre-matach PSA.We’ve written a mini-editorial about why this development was so inherently frustrating in the tactics column. There isn’t much more to add. 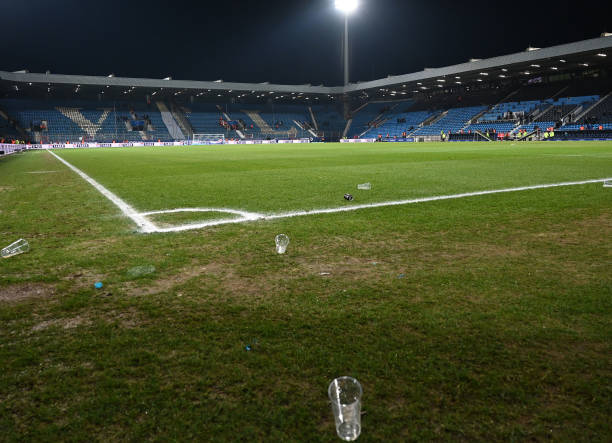 It would, of course, be nice if we didn’t take our recently reinstated right to congregate in crowds for granted so soon.

Even an iffy team playing on one of the Bundesliga’s notoriously iffy pitches can still attract a sell-out crown. Some 51,000 tickets have already been snatched up on public sale. The rest are going fast, but there are still plenty of seats available for purchase through the club’s website as of this morning. 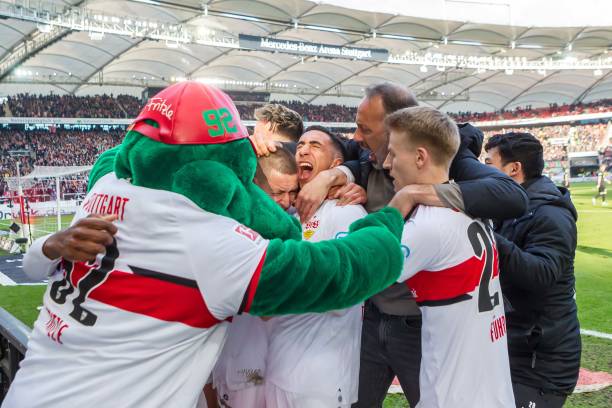 Since we do like to cover all things fan-related in this column, we might as well mention that some of the VfB stewards recently got sanctioned for acting “disproportionately harsh” toward the visiting Gladbach fan-block during a recent round 25 fixture. Some club stewards have lost their jobs. Others must attend “de-escalation training”.

Thankfully, the positive power of fans back in the stadium remains strong enough to overrule what we witnessed in Bochum on Friday night. A near capacity crowd in Baden-Württemberg’s capital cheered their side on to a sensational comeback victory at the Mercedes Benz Arena on Saturday. The scenes here were truly great; almost a perfect antidote to Friday’s sour taste. 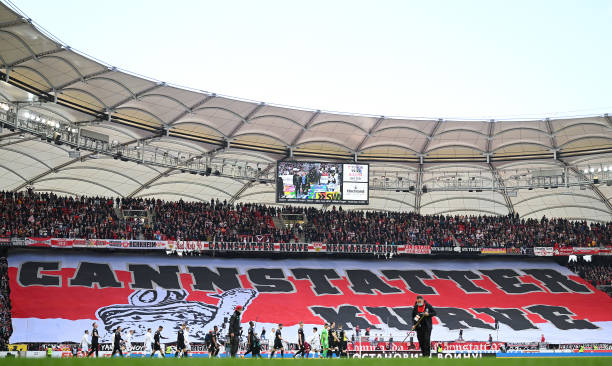 This is how a Bundesliga stadium looks on the best of days.

Even in defeat this past Wednesday night, some 25,000 supporters in the MEWE Arena facilitated a great atmosphere until the very end. The same number are invited back to the Pfälzer capital on Saturday to watch the Rheinhessen take on Bielefeld. All those of us who have had the privilege of watching the Nullfünfter live highly recommend a visit to this venue. 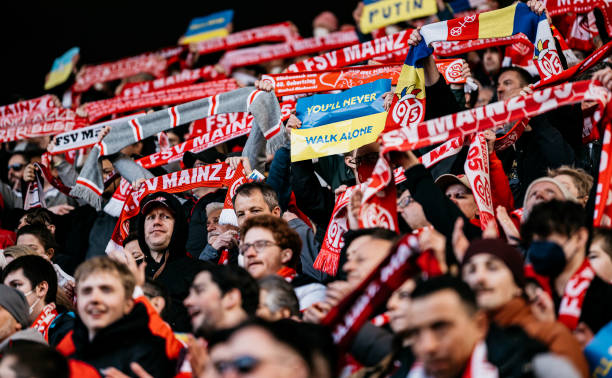 The Rheinhessen supporters had plenty to cheer about during their weekend encounter. Records galore. Mainz have actually set several home records this season thanks in large part to the unrivaled atmosphere at the MEWE Arena. As head-coach Bo Svensson put it on Monday morning, “It was no normal football match, it was a Mainz home match.” 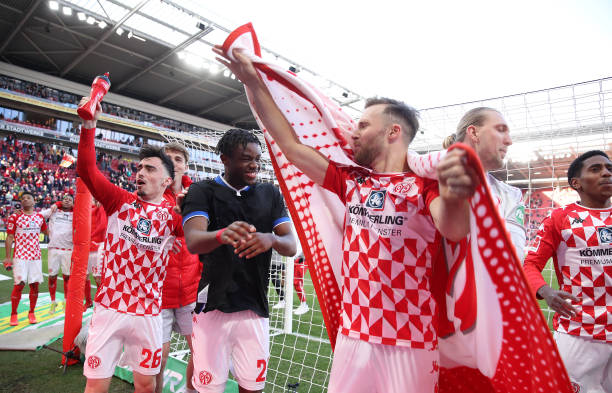 Err…anyone want to come to the Olympiastadion? Be careful about saying yes right away as–as cursed as this club has been as of late–an asteroid may very well descend on Charlottenburg over the weekend. Anyone still concerned about social distancing can easily pick a seat away from everyone else on the club’s website. 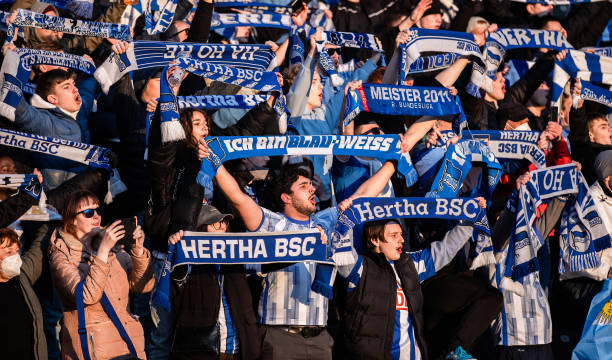 Quite the unexpected upset delivered by “die alte Dame” at home on Saturday. The critical win ups local enthusiasm for this club just in time. Don’t forget that the  Berliner Derby is only 18 days away! There should be a wonderful atmosphere in the Olympiastadion when Hertha hosts Union on April 9th. In principle, it can take place before a full house. Should renewed COVID restrictions restrict access, we’ll all be heartbroken. 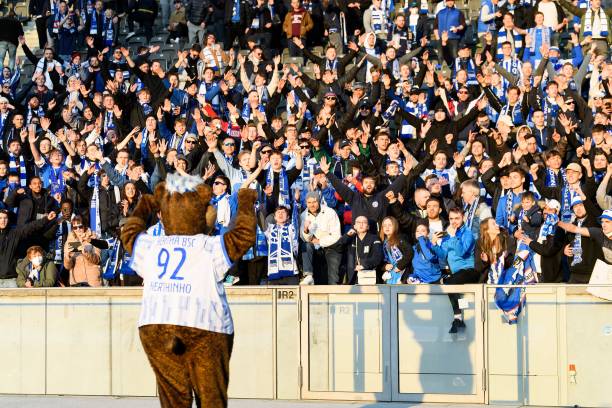 Er….How about the Ronhof? Actually, it might surprise some to learn that–despite what transpired last weekend–tickets are actually going fast in Middle Franconia. Locals don’t have many opportunities left to watch Bundesliga football in town. Moreover, the opponent is an intriguing one. This match might sell out. 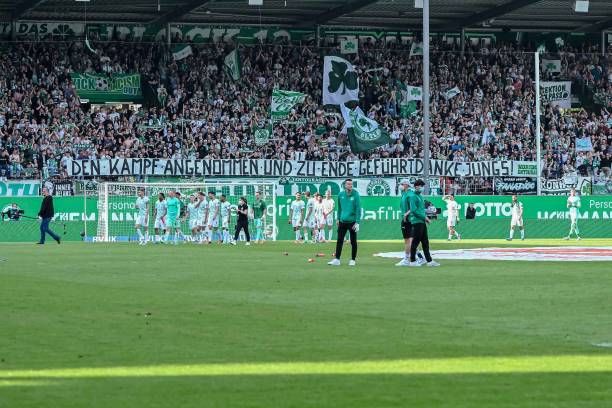 Attendance at the Ronhof was surprisingly up a tick after last round’s thrashing. The team itself responded by turning in a much better performance.The Kleeblätter were able to reclaim some of their recent strong home form against the visiting Breisgauer. In a loose tie in with St. Patrick’s day, this totally non-Irish club did it’s green beer thing on Saturday. None of the visiting locals opted to throw their “diversity cups” on the pitch.

The defending champions officially confirmed a crowd allowance increase of 10,000 on Friday. This pushes attendance to just under half of the Allianz Arena’s capacity. While most of us had expected that Bavarian and local municipal authorities would take matters slowly, there was still some hope that the FCB would get clearance for a full-house crowd one day before restrictions are set to be struck across the Bundesrepublik. 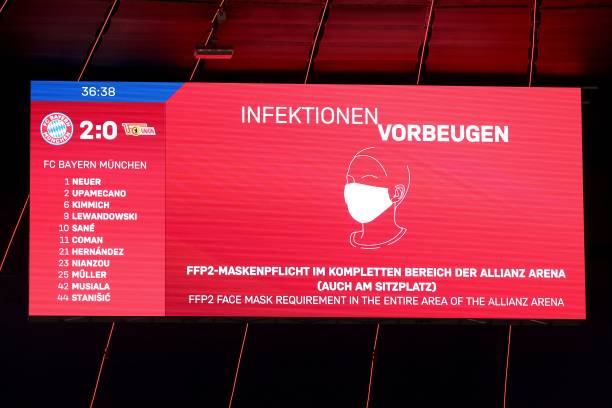 In any event, some passes are still available through direct registration on the club’s website. As is always the case, the secondary exchanges will remain active right up until the hours before kickoff. Those truly wishing to attend the Saturday night Top-spiel can likely find a way.

Yes, of course it sold out. The German giants don’t leave seats unfilled. That’s a fact. To be perfectly honest, the atmosphere at the Allianz hasn’t been especially enthralling throughout the entire course of the pandemic. Saturday night was no exception. The stands were pretty quiet. Without the ultra groups, the Bundesliga’s bis international export often falls prey to a “corporate feel” during home fixtures. 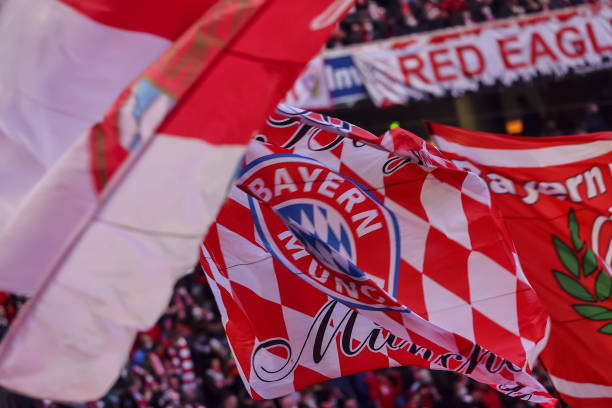 We can nevertheless find something to talk about. As was the case last week when discussing Hoffenheim, there’s a chance to work in a plug for the women. Did you know that both FC Bayern and VfL Wolfsburg will be playing Women’s Champions’ League games in the men’s Arenas during the international break? One can still attend a great match live!

The international break always constitutes a good opportunity to check out women’s UCL!

What may be the weekend’s best offering is set to take place in front of a full house. The Saxons, upon learning that nationwide restrictions were set to fall on March 20th, proactively ensured that they would be able to take full advantage on Day One. There are still some seats available through the club’s website and the coordinated secondary exchanges will operate through Sunday. 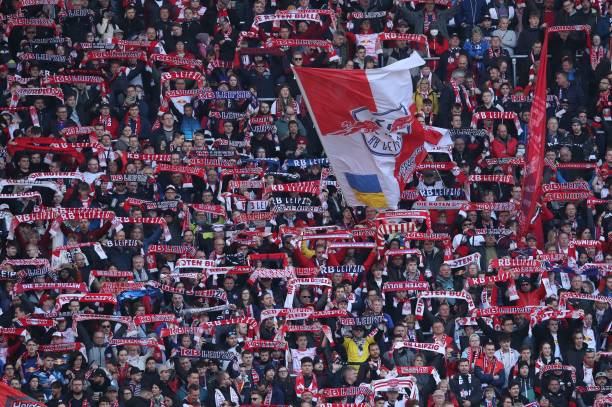 Surprisingly, this match didn’t sell out. Those local boosters who did stay home probably didn’t feel themselves cheated as the home team didn’t really deliver the best of performances. Despite this, those fans who were present delivered in their part of the bargain. The atmosphere was great. Even those of us tepid on this club do enjoy how far its fan scene has progressed over the last few years.

Germany’s green company team prepares to welcome a full house if there are enough willing to attend in the Northern Autostadt. The club wishes to emphasize that the “2G” regulation remains in effect. In point of fact the “2G” regulation remains in effect for all football matches. Only those with proper vaccination/recovery documentation can enter everywhere. 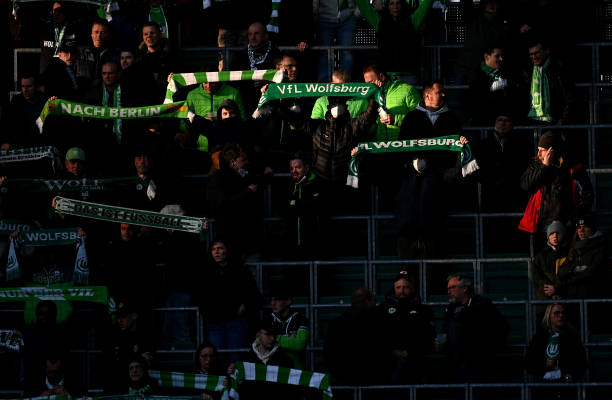 As is customary in this Lower Saxon town, plenty of seats are available.

Right. As usual, there’s not much to say about the attendance figures in the northern Autostadt. The company town isn’t the best locale to take in a match, though the VfL ultras are a fun and good-natured lot worth meeting at some point in one’s football travels. Time to work in a plug for the women again. Champions’ League football this week at the Volkswagen Arena!

The cathedral city–being part of Nordrhein-Westfalen–needed a special dispensation to get full clearance for a full house, even on the day that nationwide restrictions fell. This was obtained on Thursday. Nothing quite like a capacity crowd at the RheinEnergieStadion. Football lovers with the ability to tune in won’t want to miss out on this one. 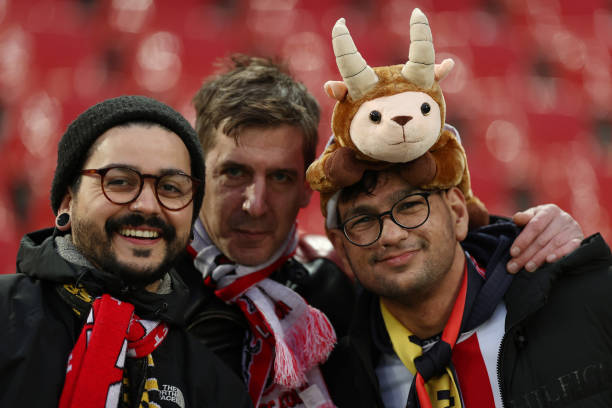 Unfortunately, the remaining 12,500 tickets set on sale are reserved for club members. The Effzeh don’t coordinate a secondary ticket exchange.

A weekend that began on the worst possible note ended with pure delight. The Kölner crowd never fails! The match itself also proved a real treat. Somewhat unfairly overshadowed by the fact that the 1-1 draw in all likelihood officially spelled the end of the title race, a splendid example of German football at its finest capped the round. Bochum-Gladbach seemed a distance memory by the time we were finished on Sunday. 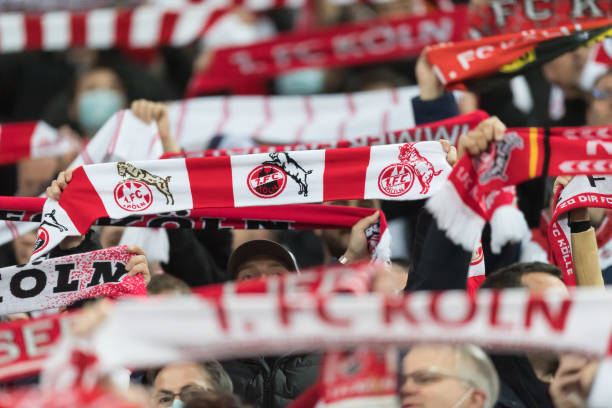 Thanks to both the players and the fans.