The second attendance column posted this week over at Bulinews holds the dearest of places in a humble fan’s heart. It’s at long last a true Pokal week in the Bundesrepublik.

Let there be packed bleachers again. 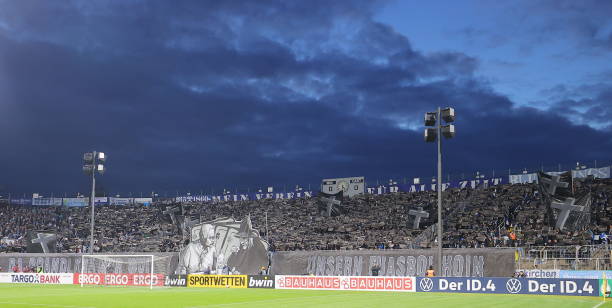 Following a packed Pokal week, it’s once again time to get ready for some more football on a tight turnaround. Knowing that this week would be different, we released our weekly attendance column a little early this time. Now we’re pleased to add our supplementary report on the attendance figures for all 16 fixtures that took place on Tuesday and Wednesday in the cup.

The return of autumn Pokal football constitutes a very special occasion for Bundesliga lovers. Traditionally, the second round of the country’s domestic cup takes place under the fall foliage. This was obviously not the case last year, as the pandemic pushed the second set of fixtures all the way back until just before Christmas. Bayern’s scheduling conflicts even delayed their match well past the calendar year.

The first round of the 2020/21 DFB Pokal, last September, was one of the few set of matches that allowed any live spectators in at all. The rest of the competition took place before empty stands. Only a handful of journalists and club dignitaries were present in the Olympiastadion to watch Dortmund take the crown.

While the entire “Geisterspiele Era” of the pandemic served as a gut-wrenching experience for most German football lovers, the cup taking place behind closed doors counted as its own special separate category of heartbreak. This applied not only to the entire 2020/21 competition, but the final stages of the 2019/20 one as well.

The quarterfinals of the 2019/20 cup had just been completed in the week prior to the global wave of lockdowns. Then fourth-tier side 1. FC Saarbrücken had actually just punched their ticket to the semi-finals. Fans of the then semi-pro side were deprived a once-in-a-lifetime opportunity to attend quite possibly their team’s biggest ever matchday.

The squad itself would then stand zero chance of even competing in the match after fourth-tier play was suspended. Visiting Leverkusen easily rolled over a team that had no chance to even train together when the delayed semis took place in May 2020.

For German football lovers in every last region of the country, the return of fans carried with it very special resonance in Pokal week. At long last we beheld the chance to see the hometown supporters cram into the bleachers of the smaller venues, doing everything they possibly could to steer their underdog teams toward the highly improbable.

While it did prove something of a disappointment that there weren’t more upsets and no side below the third tier made it through, the magnificent scenes more than compensated for it. The attendance feature that ordinarily focuses on the top flight takes a highly pleasurable diversion this time.

Fantastic news in the very first match. The figure reported on is not a misprint. There were, in fact, 37 extra supporters that the club decided not to turn away. The atmosphere in this NRW bastion of West Prussian football was fantastic. The match itself remained competitive deep into the second half, even after the home side went down a man.

The Potsdam hosts also packed in whosoever wished to attend the Tuesday fixture. One actually got a bit nervous as one group of ultras lit a pyro-display early in the match. Visiting Leipzig had been kind enough to waive their right to a portion of the gate/concession receipts. As soon as the ultras lit the flares, however, one grimaced at the thought of that extra revenue being cancelled out by a fine.

To their credit, the supporters put them out quickly. Perhaps the club can still pocket that extra cash. 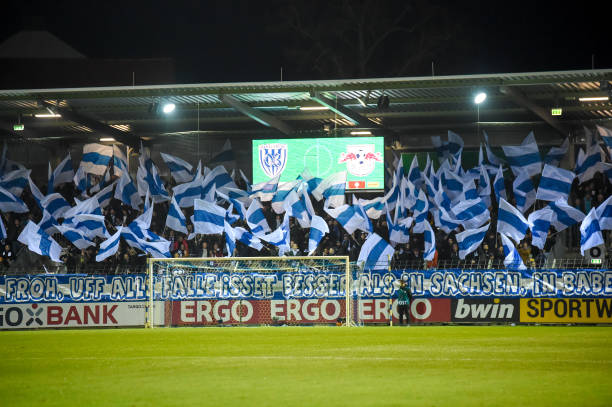 Not a particularly uplifting number here, but that’s to be expected in Sinsheim. Since we broached the topic of Saarbrücken in the introductory paragraph, do spare a care for the Kiel supporters as well. No one got a chance to see them top Bayern in the round two Pokal penalty shootout last January. A couple thousand finally got a chance to see the team get crushed by Köln in the second-leg of last season’s promotion/relegation playoff.

Now, having had their best players pilfered, supporters of the storks have a chance to watch a club in serious crisis fight relegation back to the third tier. One wonders if the DFB could have at least guaranteed the club some hosting privileges this time around. Such a shame that this club’s best ever season took place behind closed doors.

The round’s first major upset at least took place before a sold-out crowd at the Grünwalder Stadion. There actually was little doubt that this one would be maxed out by loyal generational supporters of both clubs. If one cared to turn the clock back 15 years or so, this would have even been a huge Bundesliga battle. Calling 1860 a third-tier side took some getting used to after their relegation four years back. Labeling Schalke a second-tier side still feels weird. 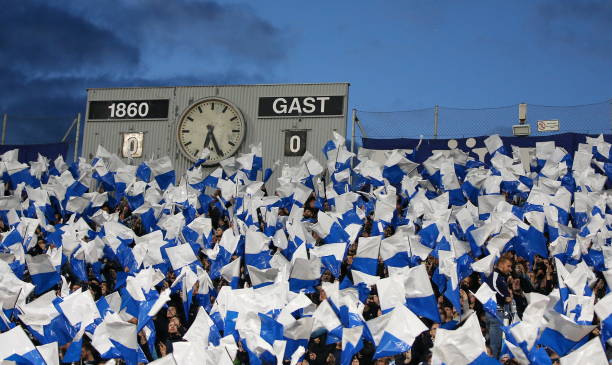 The writer is actually unsure as to whether Dortmund is one of the top-tier club that extends privileges to the season-ticket holders for Pokal fixtures. One assumes that they would have at least done so this most atypical of all years. In any event, a low figure for such a match in a Champions’ League qualification season isn’t all that surprising.

This one definitely proved to be a great football match. Osnabrück have sold out the Stadion an der Bremer Brücke once this season and it’s not exactly clear what happened here. There might be some football fatigue or left over disinterest from last year’s relegation in Lower Saxony. 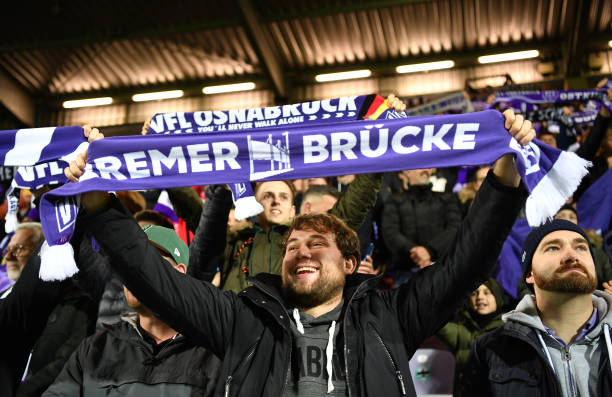 Another match that, at another time, would have qualified as a battle of Bundesliga giants. There wouldn’t have been an empty seat at the Max Morlock ground even five or six years ago. All things considered, this number stands as a strong indicator of the support the FCN enjoys in the city even after a decade of decline. 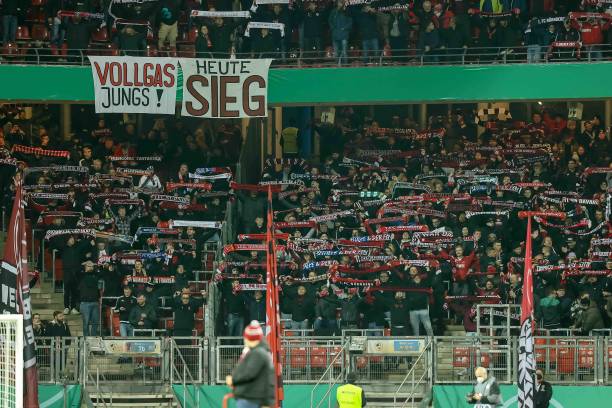 Back-to-back home matches proved a little much for the Rheinhessen faithful, who did still create maintain a lively atmosphere despite the significantly lower turnout. It remains “nature season” in the Pfalz. There will be plenty of sell-outs once “carnival season” kicks off in a couple of weeks.

The Carl-Benz-Stadion packed in the full amount that “3G” would permit. One definitely heard it too as the match entered extra time. The “Kurpfalz feeling” remained palpable throughout. Plenty of Union supporters made the trip down too. Interestingly, the current Waldhof fanbase actually reminds one of the Union one circa twelve years ago.

The craziest of all the round two Pokal fixtures shall not be forgotten by those in attendance at the Ruhrstadion. All that was really missing from this one was a packed house. The chants emanating from the stands still made it feel as if the seats venue was packed to the brim. They most likely will be should the 1848ers host during the next round. 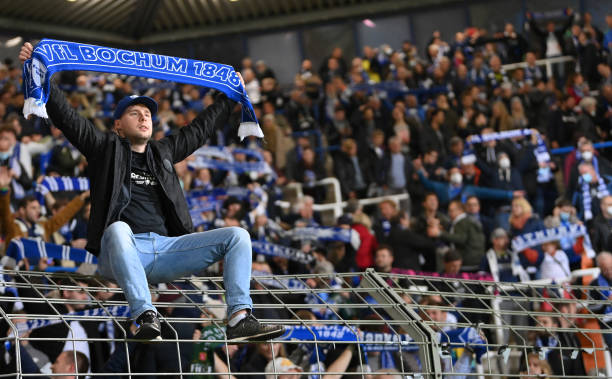 The Dynamo supporters will pack just about any away venue. Some 40,000 of them travelled to the Olympiastadion when the team drew Hertha away during this phase in the competition two years ago. Great to see the Rudolf-Habrig-Stadion full with supporters of both these awesome fan-bases. One genuinely feels sad that there had to be a winner here. 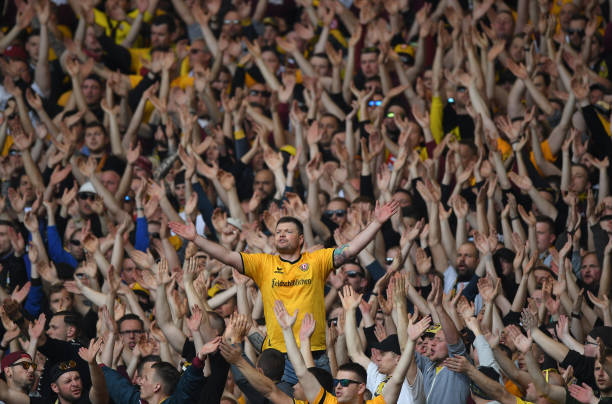 This counts as something of a surprise. The H96 fan-base usually covers the full allotment, if only to commemorate and protest. One hopes something isn’t going on in this area of Niedersachsen. These supporters remain vitally important for 50+1. The club’s days in the top flight aren’t that far behind them either. It seems highly unlikely that Reds fans have lost interest. Odd. 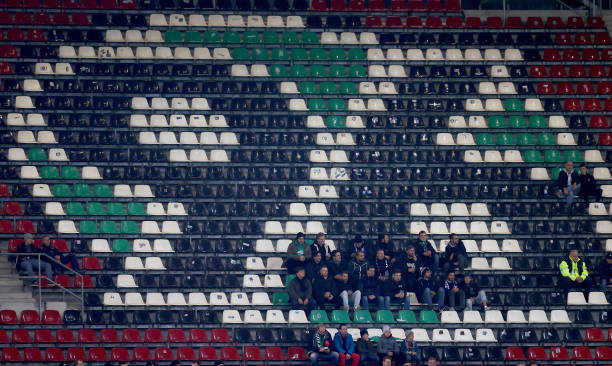 Of course it was. The writer even grossly underestimated the number of tickets that would be available. This shall definitely prove a night that the Fohlen fan base will speak of for generations. When these two teams occasionally met in the Pokal whilst Gladbach foundered in the second-league, everyone got treated to the 1970s nostalgia covering the once huge rivalry between these two clubs. Suddenly, the 70s are back. Wow. 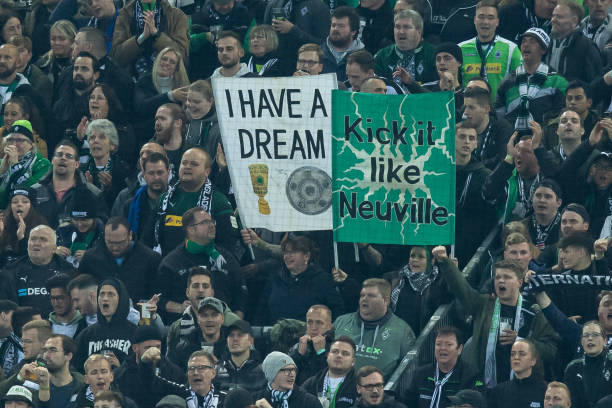 Hopefully, those who did turn up didn’t feel too let down by the end result. Regensburg’s league form this year remains cause for celebration. Pokal elimination or no, the Jahn fans really have a team worth coming out to see. Bayern loanee Sarpreet Singh looks likely to lead them to promotion.

A big enough audience for a team deprived of all its major stars. One can hardly fault the Württemberg locals for taking a pass in this case. It was never really likely to be a very entertaining football match. Sometimes the atmosphere for midweek fixtures can also feel a little corporate in large cities like this.

The attendance figures this weekend shall prove every bit as interesting as the results. Coming off a Pokal week, entering another European club competition week, we’ll get a good gauge on how much interest in football remains whilst restrictions remain in place and incidence rates on the rise across the country.

We enter the first winter since vaccines were made readily available. The issue of inoculation itself remains as divisive as ever. For now, clubs are still taking advantage of loosened restrictions. The path of fewer regulations can always swing back the other way. Fans remain aware of this uncertainty and some ultra groups stand by their boycotts.