Loads of good news for America this week. Sadly, there’s less stellar work on display in the German Bundesliga. Miss out on the latest Americans column amid everything else going on? No worries. Here’s the full skinny.

Four U.S. internationals found their way onto the pitch in the 2020/21 German Bundesliga’s seventh round. Leipzig’s Tyler Adams logged minutes for the first time since the fourth round as a late substitute. The 21-year-old New Yorker obviously doesn’t receive a graded section for eight minutes of playing time at the end of a 3-0 victory.

Adams will join Giovanni Reyna and John Anthony Brooks in heading across the pond to participate in the first USMNT matches for nearly a year. Head coach Gregg Berhalter would have almost certainly called up Bremen striker Josh Sargent as well, but a blanket club travel ban prevents the Missourian from traveling to the States.

This week’s tactics column goes into great depth about the leadership role Lucien Favre bestowed upon his young phenom in the Bayern fixture. This counts as a legitimate step forward for the American teenager. While it wasn’t exactly his day to razzle and dazzle, the 17-year-old put in some good work for his team.

Unofficial writer’s stats have him down for 34 touches and an 80 percent pass completion rate. He did some really impressive dribbling despite being swarmed in the 5th, 21st, 30th, and 63rd. A bad foul in the 44th was a mite wince-inducing, but his overall marking was also first-rate. Cross field sprinting and switching were similarly quite positive.

As explained in the tactics piece, the Bayern loss should by no means be considered a total misadventure for the BVB. Erling Haaland’s unbecoming plethora of errors may have denied the vice-champions the result they desired. All in all, Favre’s utilization of his youngsters deserves commendation. He placed a lot on this American’s shoulders in the weekend fixture. The response was, in all honesty, well above average.

The Bundesliga’s first-ever American trainer keeps a six-match unbeaten run alive with his club’s third consecutive draw. Eight place in the table through seven rounds counts as quite the accomplishment for a newly promoted side. Overall, plaudits are definitely in order for the 42-year-old from New Jersey.

We nevertheless did not witness one of his better tactical performances in Saturday’s 2-2 draw with Frankfurt. 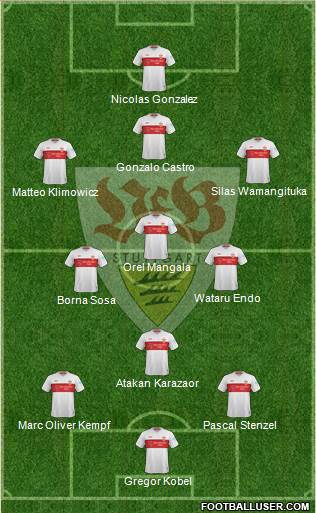 Another 3-3-4 from the Catenaccio-inspired coach. Differences between this one and the constellation observed last week include a much more defensive deployment for Orel Mangala, a largely stationary assignment for Wataru Endo, and a considerably more intricate cycle rotation on the left-hand side.

The tactics clearly aimed to allow Silas Wamangituka to ease back into his role on the right flank. All of the alterations are relevant in this respect. Borna Sosa and Matteo Klimowicz noticeably exhibited a tight choreography meant to ensure that one of them always tracked back to the midfield.

This was definitely not a match for “Wataru Endo Watchers”. The 27-year-old Japanese international settled in rather early. Mangala undertook most of the roving before establishing a firmer position slightly ahead of the halfway line in the center. All of this appeared to serve the purpose of supporting Wamangituka.

The Badeners looked fairly off for the first half-hour. Most glaring, the tactical adjustments adversely affected the ability of the team to achieve proper precision on their crosses. Sosa managed to surge into space on several occasions, yet his Wamangituka-targeted switches were far too easy to read for the SGE defenders.

Around the 15th one saw The Swabians switch the point-of-attack on more varied charges. At times, Klimowicz would move forward to pair directly with Nicolas Gonzalez. This actually may have been a breach of the system as the remaining VfB actors struggled to deliver coverage over the area he and Sosa were responsible for.

The opening Stuttgart goal came courtesy of a silly shove in the back from Frankfurt’s Almamy Touré. Gonzalez converted the ensuring penalty, giving the less disciplined side the lead in the 17th. Matarazzo’s men had some more luck break their way in the 21st. André Silva somehow failed to supply the equalizer after Atakan Karazor’s horrible giveaway directly in front of his own goal.

The match-plan continued to revolve around Wamangituka. After a sequence in the 24th, one can observe Gonzalez confronting the Congolese attacker, reminding him that he needed to announce his presence whenever he found himself in a good position to receive a pass. Such rustiness could have been fixed during the weekly training sessions.

The 38th minute goal that doubled the Stuttgart advantage owed everything to the brilliance of veteran captain Gonzalo Castro. The 33-year-old expertly kept himself onside in perfect anticipation of Gonzalez’s through ball well before the pass commenced. Years of experience got it done in that case.

Sosa, Magala, and Wamangituka all played better after the restart. The three-man defensive line, somewhat shaky in the first half, also stepped up their game. Pascal Stenzel had to clear off the line in the 52nd. The first Frankfurt goal came two minutes after Matarazzo executed a like-for-like double substitution. Tanguy Coulibaly took over for Wamangituka while Waldemar Antion relieved Karazor.

It could be considered a stroke of bad luck that the SGE found their way back into the match less than 120 seconds after the American coach had already decided to keep his tactics and run a holding pattern. André Silva’s strike in the 61st still came on the heels of appalling defending from the Swabians. Aymen Barkok tore through the switched off VfB ranks, winning a second ball almost uncontested and cutting back from the touchline to a totally unmarked Silva.

At this point, some sort of tactical shift should have been in order. Perhaps Matarazzo wished to see if his 3-3-4 could handle it. Perhaps he considered it a poor strategy to reveal anything to the Bayern München (next round’s opponents) scouting department. In any event, no one was anywhere near Frankfurt captain David Abraham on Barkok’s 75th minute corner. Genuinely awful set-piece marking led to the equalizer.

To the credit of Sosa, it was he who orchestrated the best chances down the stretch. A big chances in the 79th nearly led to Stuttgart claiming all three points without a tactical shift. One cannot help but think that at least a minor tweak might have delivered a needed win here. This team can do better.

A frequently celebrated player delivered an unequivocal “off-day”. Legitimate questions about Brooks’ fitness level arise after his team’s 2-1 win over Hoffenheim. The American looked genuinely out of gas on several key plays, noticeably drenched in sweat as he struggled to keep up.

Tell-tale signs emerge when a center-half finds himself totally burnt out on both a physical and intellectual level. Tentative positioning on straight man-to-man marking. Obvious capitulations when it comes to winning the second ball. Fouls born out of pure frustration.

Subpar awareness-based positioning can be found on marks in the 19th, 37th, 40th, 69th, and 80th. One can see him effectively give up after Ishak Belfodil swept past him in the 45th. Similar incidents occurred in the 22nd and 83rd. The shirt pull leading to the 48th minute booking was noteworthy in that Brooks somehow had the audacity to complain about his egregious infraction.

Positives include incisive passes forward in the 3rd and 70th. One can also watch him execute a fine acrobatic header away in the 87th. Unfortunately, less than one minute after he cleared the ball, the American completely missed another crucial defensive undertaking. Brooks was directly responsible for Hoffenheim’s 88th minute tally. He completely misjudged a descending ball, coming up dreadfully short to gift his opponents a way back into the match.

Wolfsburg’s win owed much to luck and coincidence in the frantic final minutes. Regarding Brooks, the 27-year old defender can consider himself fortunate that positional partner Maxence Lacroix took it upon himself to shoulder most of the defensive burden throughout the afternoon. In the (unofficial) tally, the Berlin-born American managed only 42 touches and one less than one-fifth of his duels.

One needn’t read too much into a performance that, as of yet, only qualifies as a non-trending blip. A pronounced plunge in form is nevertheless noted.

Hopes that the Missouri marvel could carry momentum over from last week were dashed relatively early. Head-coach Florian Kohfeldt regrettably put him in a position that rendered it difficult to succeed. 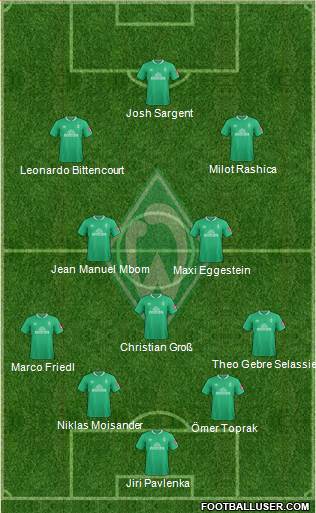 In terms of how one chooses to divide up the axes numerically, the shape didn’t differ all that much from the previous round. The idea of keeping a flexible back line that could either stand five-strong or three-pressing persisted. As one can see when comparing the shapes, however, Christian Groß took over as the flip-piece.

Milot Rashica’s positioning proved scarcely believable in the early going. It made almost no sense to witness Kohfeldt stationing him on the right. One can’t be sure exactly what the idea was there. The only thought springing to mind concerns a potential short-striker role on the break. When the Kosovar barely budged from his flank, the intent of the formation remained a total mystery.

Sargent’s lack of preparation manifested itself by the 4th minute, when he didn’t time his run properly on a set piece. In the 5th, he tried to turn inside on a promising possession instead of taking the first time shot. His teammates might have intuitively felt that he was off as they made no real effort to locate him on a 9th minute switch.

The American would produce a nice layoff for Maximillian Eggestein in the 10th. The nice play nevertheless got cancelled out by a poor first touch in the 18th and an overstep on another useful possession in the 21st. In a testament to the fact that he plays on a very disorganized team, Ömer Toprak inexplicably stepped directly in front of him when he was well-poised to head a corner on target in the 22nd. Such confused play unfairly led to him missing a quality chance.

In the 28th, Sargent would get caught underneath his own feet on his third blown possession chance of the half. One must again emphasize that the team playing behind him is truly terrible. Those interested in finding torrid examples of attack pushes in which the team showed effectively zero awareness of their lead striker can find such eyesores in the 33rd and 36th. The American did win an impressive defensive aerial duel against Sebastiaan Bornauw in the 40th.

The second half brought with it more disappointing play. As was the case in the opening 45, some of it could be attributed directly to the striker whilst other instances reflected the poor overall condition of the squad. An unseen handball that prevented Sargent from receiving a close range ball in the 51st was simply bad luck.

Rashica probably should have been looking for the American instead of shooting in the 53rd. Bittencourt could have easily shuffled off to him in the 63rd and then totally missed him on a free-kick in the 86th. Sargent himself took more sloppy touches in the 66th and 74th.

Some brighter spots did come in the second half. The American executed a nice pass in the 58th. Moreover, he actually put in a string of nice distributive decisions between the 80th and 88th. He got his only shot on goal with a strong header straight at Köln backup keeper Ron-Robert Zieler at 90+2.

The 1-1 draw with the Geißböcke was a truly terrible game of football in which the tallies came from a Niklas Moisander own-goal and a converted handball penalty. Given how abysmal both teams were, it can be difficult to fault Sargent for such a slide of a performance. His mistakes were nevertheless evident to those who have time to observe him.