The very same actors from the week one column received graded sections in the second “Americans” installment of the season. The report from the second week didn’t herald the same good news when it came to the performance assessments of Joe Scally, with the former regressing significantly. 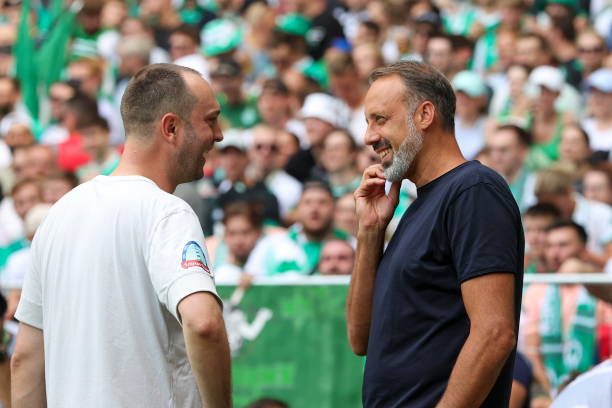 Our weekly check-in with the American actors active in Germany’s top footballing flight contains three graded sections this week. We’ll be having a look at the work of VfB Stuttgart trainer Pellegrino Matarazzo, who might just be on the verge off pulling off a highly intelligent tactical coup. After that, Joe Scally and Jordan Siebatcheu receive their sections.

Insofar as the missing actors are concerned, Ricardo Pepi made a meaningless time-killing appearance in injury time during Augsburg’s 2-1 defeat of Leverkusen. There is regrettably some chatter in German footballing circles that the FCA might loan the El Paso native out as he doesn’t seem to fit into head-coach Enrico Maaßen’s plans.

Niether Kevin Paredes nor Justin Che made the bench squad for either VfL Wolfsburg or TSG 1899 Hoffenheim, respectively. No new news available on the future fate of this duo as the transfer deadline approaches. It remains possible that one or both could be loaned out as they both sit on bloated rosters. 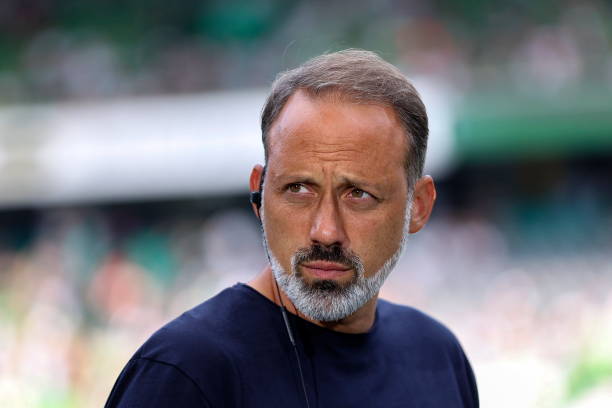 The 2-2 draw between Stuttgart and Bremen ended up being one of the best offerings of the round, not least because the newly promoted Hanseaten have emerged as one of there league’s most exciting teams. Having already praised Ole Werner’s project, it’s time to accord Pellegrino Matarazzo some respect. The Bundesliga’s American trainer put together a real tactical masterclass Saturday at the Weserstadion. Thanks to him, the near-term prospects of the Swabians suddenly appear quite bright.

It’s possible that an important piece of nuance was missed last week when assessing Matarazzo’s opening round tactics. In any event, the columnist discerned a slight difference in the shape of the squad this time around. Buttressing attackers Chris Führich and Naouriou Ahamada seem to be working a split-stagger. The American trainer has devised a clear plan for upfield link-up play. 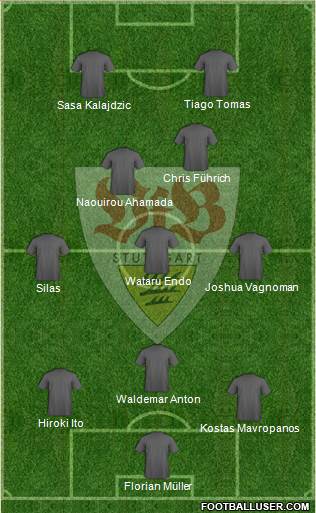 The unquestionable disastrous start to proceedings saw the Swabians get absolutely pummeled by the Bremen attack. Squad skipper Wataru Endo got his pocket picked in embarrassing fashion on Bremen’s 4th minute opening goal. The shellshocked defensive ranks and keeper Florian Müller took some time to recover from this. Endo wandered about lost in a daze for the next ten minutes.

The road back for the VfB began with some solid play on the ball from Ahamada, who has really matured since the last time most of us got a proper look at him. Matarazzo and staff have truly done well to groom him for a more offensive role. Finally, around the 25th-minute-mark, the team began to stabilize. After weathering a few charges from Bremen’s Mitchell Weiser, the Swabians wrestled control back.

Endo atoned for his earlier error by having a crack with some distance efforts after the half-hour mark. The captain eventually furnished a rocket from outside the area in the 38th that bulged the back of the net and restored parity. The VfB momentum carried on through the end of the first half and well after the restart, with Tiago Tomas regrettably failing to find the finish on a couple of occasions.

Matarazzo made what qualifies as a brilliant tactical change just before the hour-mark. The American trainer pulled Tomas for his highly influential left fullback/wingback Borna Sosa. One obviously wasn’t sure what the gaffer had in mind with this lone personnel switch. An exciting suspicion arose. Might it be? Could it be? 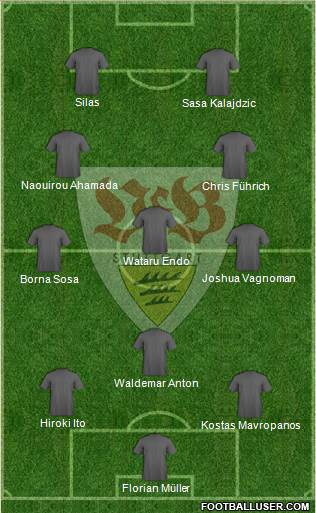 Yes, indeed! “Silas” as a lead-striker! Bundesliga watchers have seen a lot of exciting stuff from the Congolese mega-talent over the past three seasons, but we’ve never seen him operate this far up. Plenty of plaudits are in order for this bold decision. The shift would produce the go-ahead-goal in the 77th after some lovely interplay between Silas and Sasa Kalajdzic.

Had Josha Vagnoman not gone down injured in the 70th, the BaWü guests might have been able to put the game to bed. The right didn’t feature quite the same oomph with Pascal Stenzel filling in on an ad-hoc basis. Kalajdzic also spurned another chance at the 3-1 ten minutes from time. 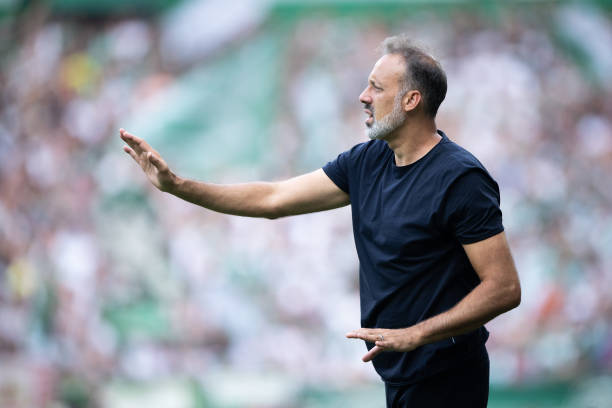 The columnist truly wanted to award perfect marks to Matarazzo this week. The final “lockdown” tactics reverted to after he had exhausted all five of his substitutions should have made certain that his team came away with all three points. Despite the fact that one really can’t fault the coach for the late lapse, an “A+” doesn’t seem in order when we’re dealing with dropped points. 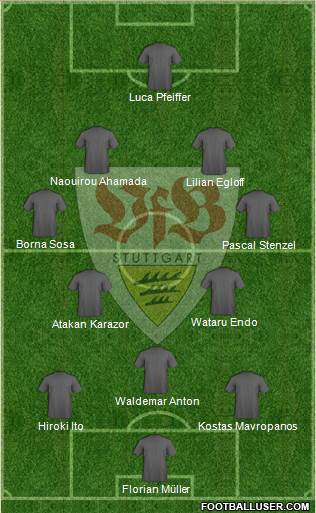 It counted as a good idea. Maybe not the best notion to throw Luca Pfeiffer and Lilian Egloff onto the field in defense of the late lead. The latter missed another chance to put the game out of reach for Bremen as the match entered injury time. Confusion between the tired Ahamada and Hiroki Ito led to Weiser being able to set-up Oliver Burke’s equalizer at 90+5.

One must still concede that two points from two matches constitutes a very solid start for Matarazzo and company. There definitely seems to be a footballing thesis at work here; something that has not always been the case with this team. If Matarazzo actually ends up using Silas as a center-forward in the coming weeks, we might see one of German football’s most skilled players catch fire.

This development is definitely worth keeping an eye on. 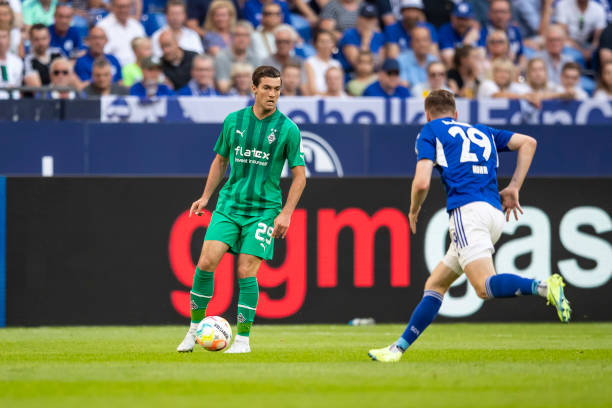 Saturday evening’s “Top-Spiel” between Gladbach and Schalke didn’t really exceed the minimal expectations most German football fans had for it. Though the 2-2 draw did produce some nice goals, large stretches of the fixture proved woefully boring. Daniel Farke’s foals – lining up in the same 4-2-3-1 as last week – largely passed around an unimaginative Schalke side that didn’t have much of an offensive plan. A few interesting organic rotations from the BMG actors. That’s about it.

Scally did cover a lot of ground on this day. He popped up in a quite a lot in positive (and creative) offensive cycles whilst racking up a recorded 66 touches on the day, around about as much as he did last week. His best forward actions came on neat attack triangulations in the 10th, 27th, 37th, 40th, 44th, 47th, 58th, 68th, and 87th. In most all of these cases, he worked nice give-and-gos with Jonas Hofmann.

The were some suspect losses due to mark errors (12th, 15th, 29th, 33rd, 42nd, 54th, 73rd, 85th) along with a few instances in which he either started to early or failed to crash in on attack charges (3rd, 8th, 49th, 60th). Much of this seems to stem from the fact that Gladbach’s play out of the back always centers around the newly acquired Ko Itakura. Scally sometimes seems out of sync as he adjusts to this.

Overall, nothing majorly wrong with this Americans most recent performance. The teenager covers his patch of pitch very well at both ends. In the opinion of this column, he deserves to come in just under “A Level” with another “B+” mark. Assuming he can sustain current form, the Long Island native should make Gregg Berhalter’s next USMNT squad. 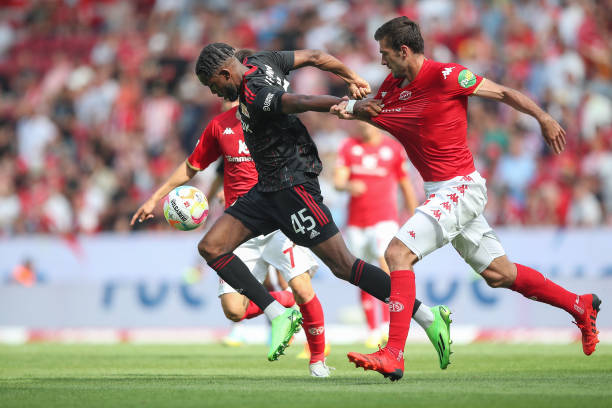 Sunday’s goalless draw with FSV Mainz 05 certainly laid bare the limitations Urs Fischer and Union are dealing with when it comes to their new striker. The big American target forward isn’t Taiwo Awoniyi. As we were discussing last week, Siebatcheu’s partner Sheraldo Becker must do all of the hard work when it comes to digging out long balls launched in the direction of the attacking tandem. On a boiling hot day like Sunday, one really felt for the D.C. native’s colleague.

We’ll mark the Bundesliga newcomer as slightly below average in his latest appearance. On the few occasions that Union were able to get forward, Siebatcheu ran his routes well and was sometimes unlucky to not receive useful service. Siebatcheu’s more limited style of play isn’t necessarily a draw back. He’s merely more of an old-fashioned “Ox in the box”.

One still senses there are many goals coming this season. Fischer’s tactics (as was eminently foreseeable prior to the start of the season) aren’t going to change at all in the coming months. Siebatcheu knows his role. His teammates ostensibly know how to make the most out of where they can reliably find him. Maybe this American can tweak his game a bit too and become more effective.